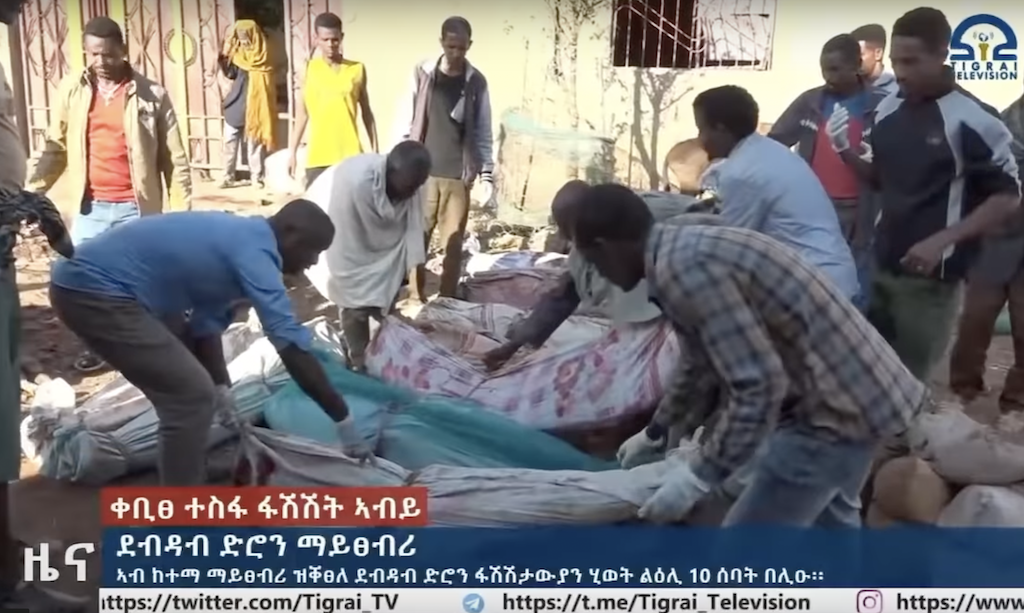 Air attacks by the government defense are on the agenda in Tigray. In the last few weeks alone, several air and drone attacks have been counted that have resulted in injuries and deaths among civilians. Target not only urban areas, but also IDP refugee camps.

Not that before these weeks of January 2021 there have not been continuous bombings and air raids, but unfortunately, due to blackouts and isolation of the Tigrinya regional state, a lot of information and events fail to leak out in a fluid, constant manner for clear and transparent information. : this is the only certain constant in 14 months of war and humanitarian catastrophe in progress.

On Monday 10 January, American President Joe Biden called Ethiopian Premier Abiy Ahmed Ali : the purpose of the call was dedicated to the discussion on the war and the situation in Ethiopia and its management. The Ethiopian premier in a subsequent tweet said :

“I had an honest telephone conversation with @POTUS on current affairs in Ethiopia, bilateral relations and regional issues. We both agree that it is a great value to strengthen our cooperation through a constructive commitment based on mutual respect. “

The same tone of cordiality and understanding of intent reaches the official statement from the White House, including “accelerating the dialogue towards a negotiated ceasefire, the urgency to improve humanitarian access throughout Ethiopia and the need to address the human rights concerns of all affected Ethiopians ” .

However, there are certainly deeper backstories that clash with the words, declarations, intimations that took place in that call: the journalist Fulvio Beltrami makes an in-depth analysis .

How out of place with the news that arrives the same day, Monday 10 January , regarding yet another air raid in which 17 civilians were killed by means of killer drones, radio-controlled bombs in Mai Tsebri.

On Saturday 8 January, the area of ​​Dedebit, in northwestern Tigray , suffered the same atrocious treatment: target IDP refugee camp where 57 people including children were killed, injuring 126 including 28 critically: the United Nations informed who have suspended humanitarian activities in the area .

On Wednesday 5 January, another drone attack bombed a refugee camp with a disastrous conclusion for several Eritrean civilians, including children.

On Tuesday 11 January , the e x President of Mekelle University Kindeya Gebrehiwot reported through social media that a drone attack hit the church of Hiwane, in the south-eastern Tigray area, killing 2 civilians. Indiscretions and rumors would speak of other new attacks and bombings, but there is no more information to confirm. Surely as the editorial staff of Focus On Africa we will not fail to update the news in case new details arrive.

This image was recently shared via social media, it represents the list only of the latest air attacks: the numbers refer only to the victims and injured among civilians of all ages, there is no evidence that the terrorists pursued by the central government have been hit. 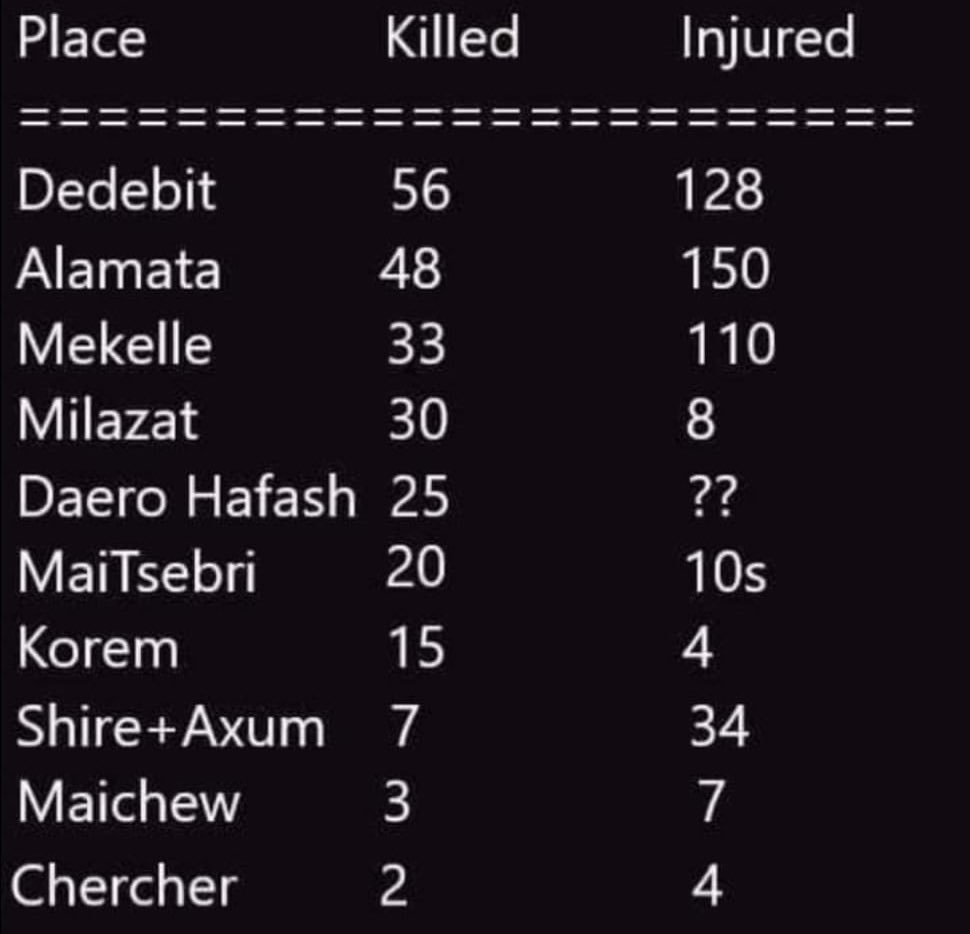 The journalist of ESAT – Etiopian Satellite Television & Radio, Fasil Yenealem via social , comments on the news beaten by Reuters of the 17 civilians killed by drones last Monday with these words:

“How is a civilian different from a terrorist in civilian dress? Any suggestions?”

While Wim Zwijnenburg, project leader of PAX – Pax for Peace shares an analysis regarding the drones used by the Ethiopian government . Drones that the government uses to try to annihilate its enemy, the one that legally legitimized as a terrorist in May 2021: the members of the TPLF party and all sympathizers and supporters, suspected and therefore prosecutable as the partisans of the TDF – Tigray Defense Forces. Tens of thousands of people of Tigrinya origin are still under arrest in often unspecified places and the methods of detention and arrest.

Mass arrests – some insights about it:

Wim Zwijnenburg would confirm with refutations after satellite photos shared by his recent report that Turkish drones are used in the war in Ethiopia and begins the analysis by declaring that:

“Rumors have been circulating for months that Turkish armed drones Bayraktar TB-2 are being deployed by the Ethiopian government in their fight against the Tigray Defense Forces, an armed resistance group that took up arms in 2020.”

“Now the new high-resolution images from Planet Skysat confirm the presence of the TB-2 at the Harar Meda military airport in Bishoftu, just south of the capital of Ethiopia, Addis Ababa.”

This confirmation via satellite images, analyzing and comparing archival videos and photos, and from previous months indicate that this airbase is the main drone hub in Ethiopia, according to analyzes by PAX. The documentation collected also shows the presence of Chinese Wing Loong armed drones and Iranian Mohajer-6 drones also located in this airport. Drones also previously sighted in Semera, in the Afar region.

On the purely war strategy side, Wim Zwijnenburg goes on to analyze the fact that Ethiopia has Mig-23 and Sukhoi Su-27 and attack helicopters that use unguided missiles and bombs and that have increased the risk of killing. civilians, as reported at the beginning of the article (not all air strikes have specified whether by drones or aircraft precisely due to the lack of the possibility of independent verification in the field). Drones are remotely radio-controlled bombs, surgical weapons that could avoid unwanted targets such as civilians, adults and children, but it appears that, as per the PAX report:

“However, there are strong indications based on eyewitness accounts and ammunition remains found in the field that even armed drones have been involved in attacks on civilians or civilian infrastructure.”

As Filippo Grandi – United Nations High Commissioner for Refugees – declared on Thursday 6 January after the attack on the IDP camp of Eritrean refugees:

“Refugees don’t have to be a target.”

And as stated by UNICEF

“Children frightened, killed and injured in recent attacks on refugee and IDP camps in northern Ethiopia.”

PAX advances advice on the concerns of the international community towards the affected Ethiopian and Eritrean civilians:

“The numerous human rights violations, some of them amounting to war crimes, perpetrated by both the Ethiopian government and Tigray forces are reason enough to stop all arms sales to the country.”

In Italy there is law 185 for the management of arms trade and exports, Italy which, moreover, has a military agreement signed with Ethiopia, but it would seem in stand-by due to the aforementioned law, put on hold for “better times ”Given the unstable situation in Ethiopia.

To deepen the issue of military agreements Italy Ethiopia we point out the testimony of the Young Tigers in Italy interviewed by Elisabetta Burba for Panorama: “ Funding and military agreement between Italy and Addis Ababa ”

Thus also Wim Zwijnenburg in his intimate report that Turkey , which signed a defense agreement in 2021 with Ethiopia with war in progress , should be regulated by the ATT ArmsTrade Treaty .

“The current approval of the sale of TB-2 drones to Ethiopia is not in line with the human rights situation on the ground, which should be reason enough to deny an export license.”

Concluding the report, Wim sheds light on the current situation of the arms market in Africa by saying that:

“With new Turkish drone arms export contracts concluded across Africa, the growing deployment of armed drones is also expected to see increased use soon. Already armed drones, Chinese or Israeli, were involved in various Moroccan attacks against separatist groups in 2021 and the country now also operates TB-2 drones. In its 2021 Remote Horizons Report, PAX documented the rapid advance of military drones across Africa. Their growing popularity and increased deployment in opaque military operations on the African continent are accompanied by a general failure to address international calls for transparency and accountability of armed drone strikes, both by African states and third countries, in particularly in counter-terrorism operations.Current developments should justify swift international action to strengthen international legal principles on the use of lethal force and rethink arms export controls and risk assessments on the sale of armed drones. “

The drones used by Ethiopia to fight the Tigrinya partisans are not only Turkish, but as reported by Oryx analysts:

“Iran delivered at least 2 Mohajer-6 in August 2021, China, from which Ethiopia received 3 Wing Loong I in September 2021, and the United Arab Emirates, which deployed at least 6 of its Wing Loong in the Harar airbase in Meda in November 2021. “

However, the infographic shared by data from the United Nations Office for Humanitarian Affairs – UNOCHA is eloquent, which at a glance you can learn what the humanitarian disaster situation in Ethiopia is: numbers comparable to Afghanistan, but in the silence of the world poorly informed by the media, especially the Italian national mainstream. 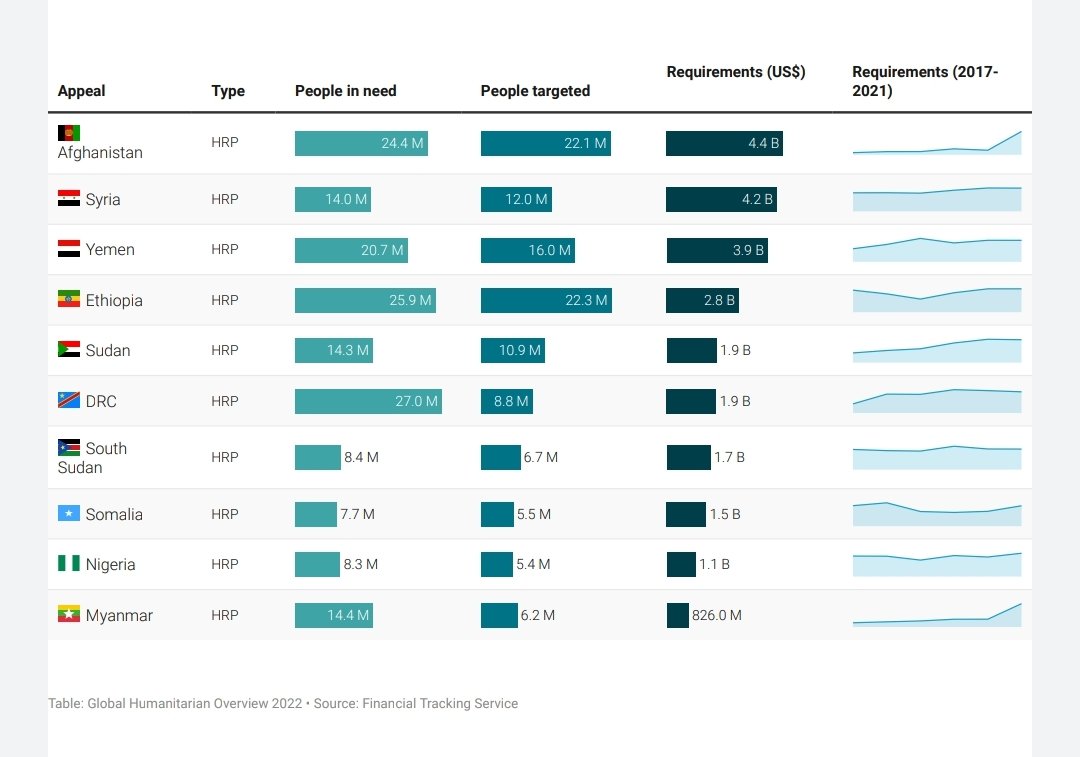 Tigray is subject to what the United Nations calls a de facto blockade that prevents life-saving medicine and food from reaching millions of people.

“Nowhere in the world are we seeing hell like in Tigray. It is so terrible and unimaginable during this period, the 21st century, when a government denies its people for more than a year food, medicine and the rest to survive “