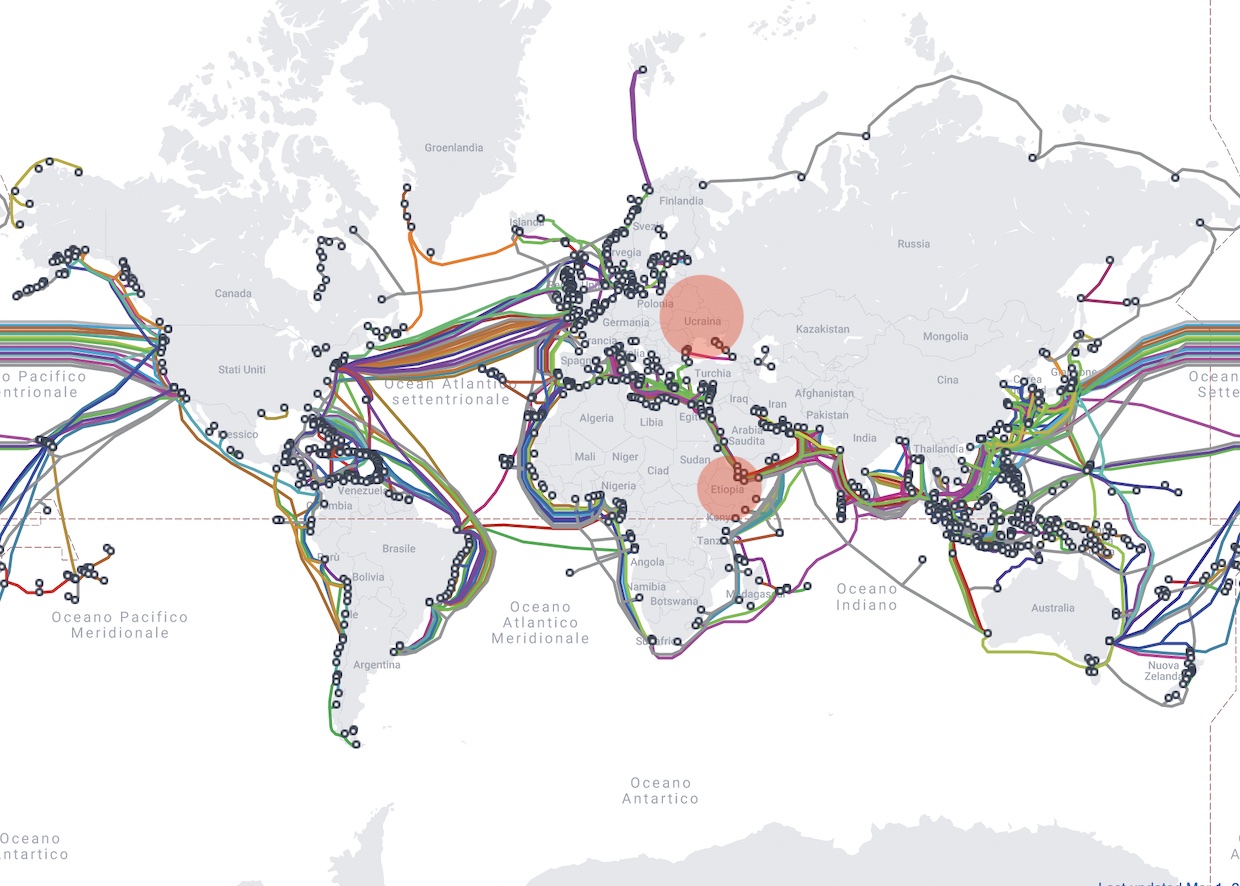 It started out as a quick police action. It immediately distinguished itself as an ethnic war with genocidal implications.

There is a humanitarian crisis unfolding.

The people, the residents, the civilians of that place have become internal refugees and try to escape from their country under attack, isolated and invaded. 80% of the health system has been destroyed and put out of use: a systematic attack. Places of worship and monasteries were also destroyed and looted. Fields burned, crops, cattle killed or stolen. Civilians of all ages, sexes and social classes who had nothing to do with that war were killed by air raids and by drones. This was just the tip of the iceberg. There have been tens of thousands of gender-based violence and systematic rapes: reports that testify to the harsh reality have been questioned because it has not been possible to refute the methodology for collecting testimonies: main cause? Territory blocked in communications and borders. In short, a propaganda war to diminish the horror of the reality of the facts.

All this started more than a year ago and we are not talking about today’s tormented Ukraine, but the regional state of Tigray starting from November 2020 to today.

On Friday 4 March, rumors and news arrive that yet another drone attack has occurred in the city of Shire Endaselassie, inflicting heavy losses on civilians and property.

There are wars that are lived and followed “comfortably” sitting on the sofa at home in front of the TV or via social media : bombarded with information at 360 degrees. Most of the time it is noise, propaganda and fake news because even the information pandemic, the infodemic is a deadly weapon used by warlords.

A “swift police action” began in November 2020 to block and arrest all members of the TPLF – Tigray Peoples’ Liberation Front party. The activity immediately turned into war with the main military actors: the federal defense forces ENDF, the Ahmara allies and the Eritrean troops occupying the Tigrinya territory even today. In the total blackout it took many months to have the first macabre, atrocious and inhuman indiscretions that civilians had to suffer systematically by the military forces. To date there are problems with access and humanitarian supply. At least 37 health workers are killed and 78 injured. Due to insecurity in various areas, some humanitarian agencies have had to withdraw from their work, leaving the Tigrayans at the mercy of events.

The Washington Post on March 1, 2022 published an article on how Ukraine and the people of resistance to Russia have and are using social media as a defense weapon, as a tool to resist the Russian invasion.

The Ukrainian people are using social media to:

The Ukrainian government is using:

While the ICRC, the International Committee of the Red Cross makes it known that from January 2021 to January 2022 it managed to give 41326 free phone calls to all Ethiopians of Tigrinya origin, stranded in Tigray, who have lost contact with their families and loved ones. . Telephone service thanks to satellite telephones released from the Ethiopian national network. Tigray is made up of 7 million Ethiopians.

While the blocking of the internet by the government’s political will, in addition to communications between civilians, banking services and access to current accounts were blocked. There was no way to leak anything in real time like it is happening in Ukraine. In more than a year this has ensured that all commercial activities, startups, cultural training realities were also destroyed.

As reported recently by Tghat in its in- depth analysis “Impact of the Internet Shutdown in Tigray”:

“Mekelle University, the largest university in Tigray, has developed an e-learning system and digitized its operations. When the internet was suddenly shut down, the university was effectively rendered useless. Goitom Tegegn, the university’s then director of public communications, explains in a letter that he wrote to federal government officials how the university was forced to stop teaching, research, stop its research collaborations with other universities; how scholars were forced to trash their manuscripts because they could not communicate with publishers and collaborators. “

The Tigrayans were not given the opportunity to tell their story , what they experienced and suffered in 16 months of atrocity. So much so that even today there is a problem linked to the credibility of the sources and testimonies that told of the massacres, violence and activities that can be categorized as war crimes and against humanity.

Independent media and journalists have also been subjected to attacks , intimidations and actual acts of intimidation by Ethiopian police forces. Some were arrested, others searched, others boarded and deported, others killed.

On November 2021, 1 year after the start of the war in Tigray , a national state of emergency was declared by the central government to safeguard the security of Ethiopia. The national media have been subjugated by the legislation of the state of emergency. They received orders not to be able to tell or share newsletters from the front. Some of the major international media (BBC, CNN, Reuters …) have been criticized for “misconduct” and have been warned against sharing “fake news” under penalty of the withdrawal of the license to operate in Ethiopia.

War is not fought only with bombs and rifles.

There is a propaganda war. Today we must also take a look at the so-called cyber war (more than actions of cybernetic warfare, they are actions of retaliation and propaganda), the war that passes through the network, which goes beyond the internet: social networks, messaging apps, private networks created for hoc …

Noteworthy is a recent article by Wired Italia that reported the cyber attacks between pro-Russian and pro-Ukrainian hacker activist teams. The article is titled:

“The data of the Conti ransomware gang, which had sided with Russia, were released.

A Ukrainian researcher, infiltrated into the collective of pro-Russian cyber criminals, disclosed over 16,000 internal and confidential messages from the gang. Meanwhile, the Belarusian partisan hackers hit their country’s railway infrastructure.”

While in Tigray , thanks to the blockade of telecommunications and energy, with a people in the dark and held hostage by the war, it is certainly much easier for some to channel propaganda information and also manage to water down any evidence of crimes and against humanity.

On Monday 7 March 2022, the eve of International Women’s Day , the UK Parliament hosted two women: Filsan Ahmed, former Ethiopian Minister of Women, Children and Youth, and Lucy Kassa, independent journalist. In addition to an act of solidarity with all Ukrainian women, they brought absolutely devastating testimonies of the horrific acts of rape perpetrated on thousands of Tigray women and the call for urgent action needed. Urgent action as much as the urgency of action after 16 months for support and aid may be.

On Tuesday 8 March Antonio Guterres, Secretary General of the United Nations, called the Ethiopian Prime Minister and discussed humanitarian access to areas affected by the conflict, as well as political dialogue in Ethiopia.

Even the Deputy Minister of Foreign Affairs Marina Sereni , in a 3-day trip to Ethiopia, told Avvenire that:

“We have stressed to the government that we encourage dialogue. A corridor for aid needs to be created in Tigray and Afar and Amhara regions. And we need truth about crimes “

Concerns and requests that have been on the list of things to do for 16 months now and that everyone is very clear about , but which have not yet seen implementation, in a Tigray and the rest of northern Ethiopia which has now been experiencing a humanitarian catastrophe for more than a year. year.

Forgotten wars, such as the one in Tigray, could be called “second-tier wars” but that’s wrong.

The common denominator, besides obviously the atrocities and the inhumanity they create, are the resources.

The war in the regional state of Tigray, which began in November 2020 and which today created a humanitarian catastrophe in northern Ethiopia, has been in the shadows for more than a year, even worse today totally obscured by the war in Ukraine.

As soon as, we hope soon, the “super powers” and the warlords will rebalance the resources at stake for their objectives, will they return to worry about Africa, to resolve, mediate conflicts and humanitarian crises to safeguard the exploitation of the continent’s resources.