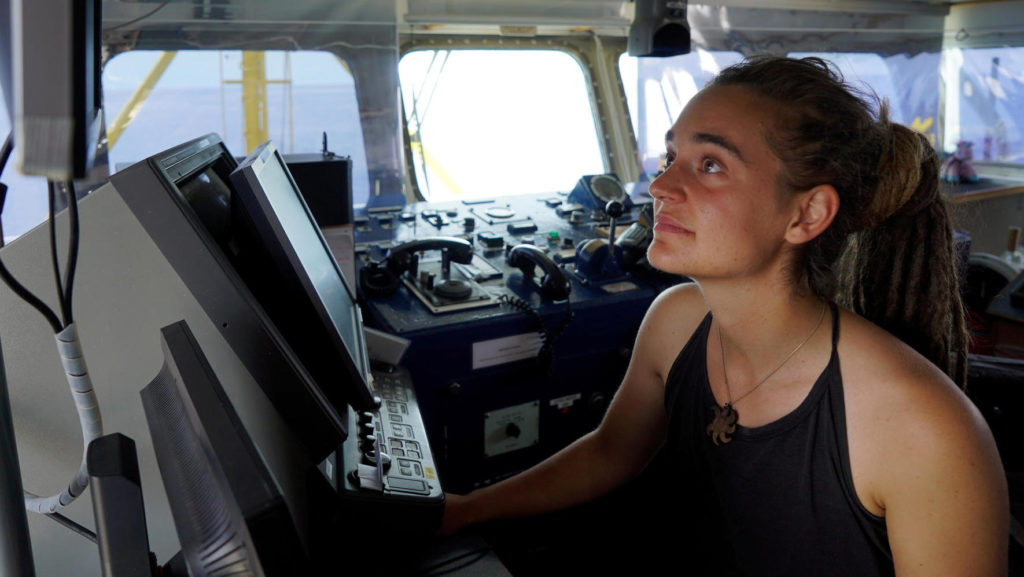 It took a German woman to rattle and scatter Minister Salvini’s deck of cards. A young, German woman with solid values. An extraordinary woman who has had everything in life and now wants to devote a part of it to those who have nothing.

Carola Rackete deserves the Nobel Peace Prize for the courage she showed in defying a ridiculous law that should be disobeyed, because civil disobedience is profoundly Christian. The first martyrs died defying injustice. The law of life and the law of love should be our compasses, guiding us to personal sacrifice for which the Captain of the Sea Watch is at risk now.

She reminds me of Antigone when she said that the only way to contend a series of ridiculous laws was to abandon collective madness and use instead the word, ‘love’. We are becoming dehumanized. So much so that we ordered the removal of banners that urge us to ‘Stay Human’ and remind us of the biblical phrase, “Love Thy Neighbor”. Ridiculous.

I am truly upset. The consequences of the Security Decree pain me deeply because the new law is nothing more than a ‘game’ Salvini is playing to create conflict in the winds of war where any show of strength secures political consensus and votes. And sadly, there are many Catholics among them; so eager to remember they are Catholic that they forget they are Christian…

The Sea Watch, with its migrants aboard, was like an ambulance transporting a very sick person, rushing for the nearest hospital without stopping, even when the police tried to wave it down. There was a state of emergency on the ship so it had every right not to stop in its hurry to dock in the nearest and safest port.

For this reason, on the Day of Fasting on July 3 we will walk from Saint Peter’s Square to Montecitorio after attending the General Audience and listening to Pope Francis, to express our solidarity with the Captain and crew of the Sea Watch.

“A YEAR OF FASTING FOR JUSTICE”

It has been a year since we shared in the impassioned appeal with Mons. Raffaele Nogaro, Sister Rita Giaretta, Don Alessandro Santoro of the Comunità delle Piagge, Padre Giorgio Ghezzi and the Comunità del Sacro Convento in Assisi who began a relay race of individuals, associations, spontaneously-formed groups, and religious communities who have been conducting token acts of protest and indignation, and raising awareness in all men and women of good will. Pope Francis asked, “Have you ever cried when you saw a migrant ship sink?” during the Mass at Lampedusa commemorating the 33,000 victims of the Mediterranean Sea because of the restrictions laid out by “Fortress Europe”.

This is not only about migrants, the poor, and the desperate sinking, it is also about Europe and its ideals of being “home to human rights” sinking. The Charter of Fundamental Rights of the European Union states, “Human dignity is inviolable. It must be respected and protected.”

This is a crime against humanity, an impoverished and desperate humanity, perpetrated by an opulent European Union that turns away those who knock on its doors. Even Italy has decided not to receive, to shut the door on NGO ships and entrust the Libyan Coast Guard with the task of saving the migrants only to send them back to the hell in Libya.

A year has passed and these words are still bitterly valid. If on one hand the Italian government has exacerbated reception policies and fueled a climate of intolerance appealing to fear and exclusion, normally foreign to the sphere of our legal culture and our European, civil and Christian identity, on the other hand, there has been a rise in dissenting voices, principled opposition and peaceful protest in addition to civil disobedience, for which and with which we return to fasting today.

On Wednesday, July 3, we will meet at 1:30 pm at Saint Peter’s Square (at the beginning of the colonnade in Via della Conciliazione) and from there, we will walk to Piazza Montecitorio where we will protest from 3:00 to 7:00 pm.

We invite you, now more than ever, to participate and share our invitation.