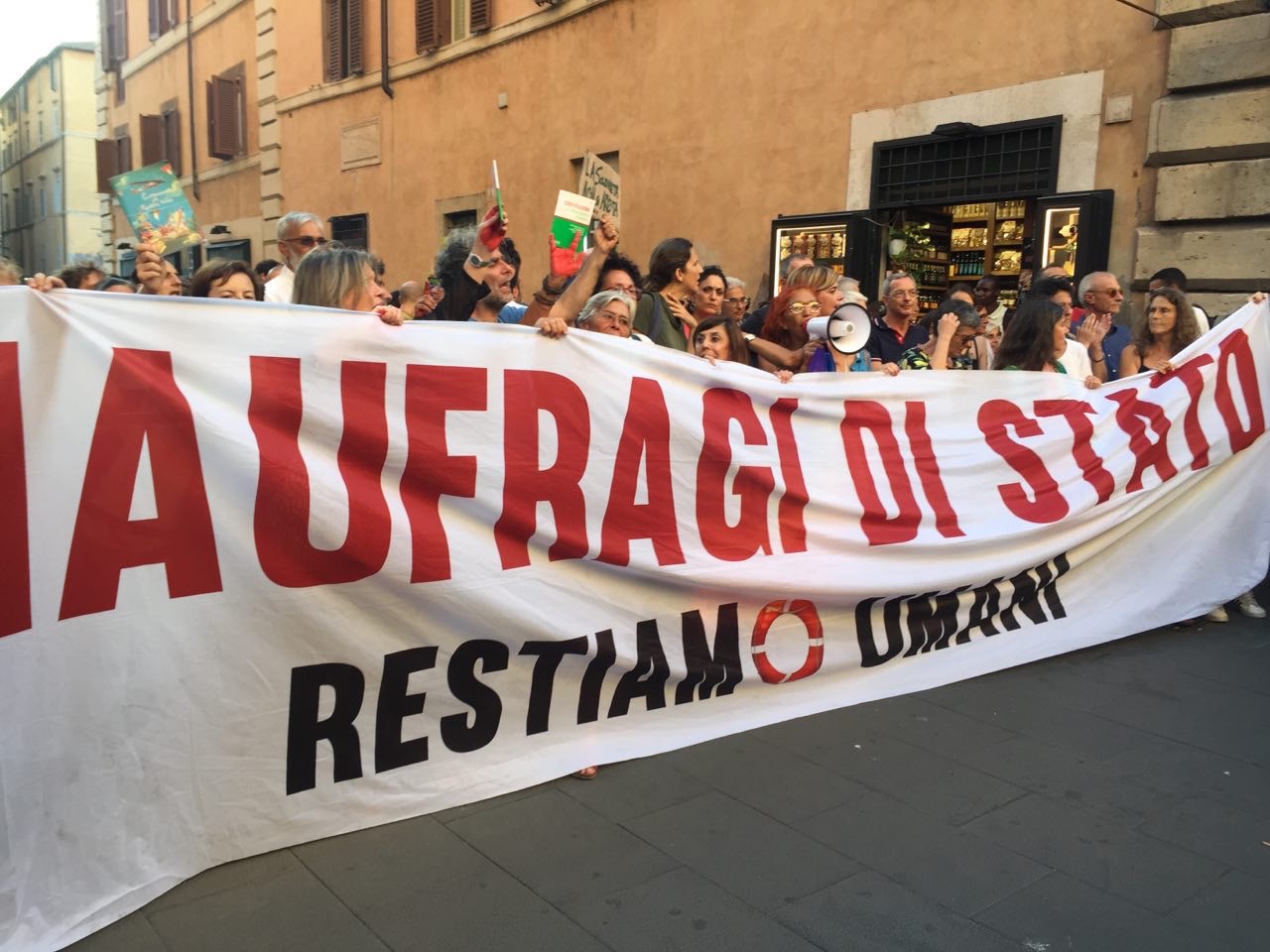 While the white supremacists in the United States take to terrorism against other races (any non-whites due to their own mental illness), the Italian Senate passed the new version of the security decree that had already been approved by the lower house, with no changes made to it, in a second confidence vote. Basically, according to Salvini [Secretary of the right-wing Lega Nord party, Deputy Minister of Italy and Minister of the Interior], the decree aims to build an insurmountable wall between Africa and Italy.

“Stop invasion” has been a very successful slogan for the League and other far-right parties. The decree is one step closer to building a virtual fortress around Italy.

Just us, alone, perhaps aging, scared, incapable of pronouncing the word “future” but “masters of our own house”, and above all, pure, without contamination, fighting fiercely against “ethnic replacement” by the black hordes coming from Africa.

Us here, they in their own homes. Apartness (in South African Afrikaans it translates into “apartheid”).

Institutionalizing racism and separate development, the social creation of the enemy, the battle against the “neurization” of Italian society are all themes from the past. In the end, Salvini did nothing more than lead a political electoral process of old to its latest outcome. It began with the Bossi-Fini law, which then became the Maroni security decrees (including the unfounded equation between immigration and crime), that went as far as asking doctors to report illegal immigrants who went to them for medical assistance!

The “salviniist” wave has deep roots that we didn’t know how to or didn’t want to tackle steadily enough to get effective results. In fact, we ended up mimicking right-wing policies by awkwardly taking a stand on security measures, but still losing votes.

We took for granted that integration was natural. We did not establish infrastructures in our own governed municipalities with long-term policies that included social, intercultural and cultural mediation on rights and responsibilities.

We took for granted that “Italians are good people” while human anthropology teaches us that no population, no country, no community is ever immune to the seed of racism and intolerance.

The fear establishment essentially worked its unified network without counterparts. Where was culture; where were the actors and directors; where were the democratic journalists looking? An alternative narrative worthy of talking about during a coffee break didn’t exist.

The absence of the world of culture allowed for a veritable anthropological mutation of the Italian demos to take root in a short period of time, exasperated by the memory loss of Italian immigration in the past.

As of tonight, after thousands of years, the Mediterranean Sea is symbolically enclosed, a frightened and buffering lake, a fortress with a deep trench that separates it from the southern coast of the Mediterranean.

We will remember this particular August 5 in order to keep believing in Europe, the cradle of human rights and humanism; a Europe that has become a plural form with colonialism and immigration from the past decades.

The battle continues but we have to learn from our fatal mistakes, the first of which is forgetting democratic values and the ethical principle of reciprocity upon which democratic social relationships are founded.

But in order to do this, our outraged tweets just for the sake of posting are not enough. We have to go back and study history to find the information we need to decode the complex history of relationships between Europe and Africa with the scope of re-encoding new universes of meaning and operative modules for otherness that can be recognized and appreciated.

We have to abolish borders – of knowledge, skin color, religious diversity, social status – that reject others and instead have dynamic borders open to multiple access.

Let’s write our own decree for shared humanity, with equal rights and responsibilities for everyone.

I don’t want to have to prepare my children to look elsewhere for a future, because I want their future to be in the peninsula in which they were born and raised.