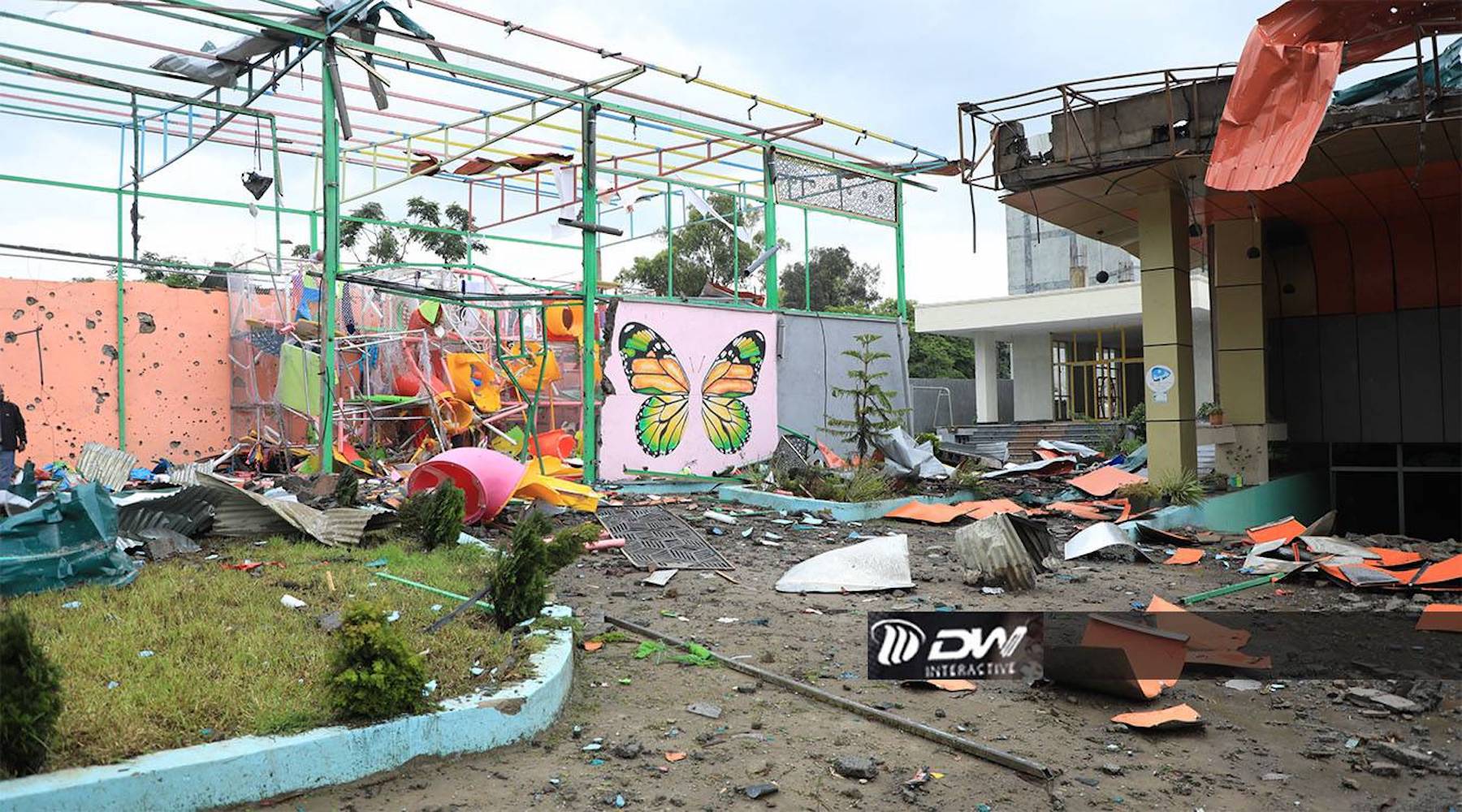 Aerial bombing of the Paradise Kindergarten in Mekelle, the capital of Tigray, a northern regional state in Ethiopia. Attack occurred at noon on August 26, 2022.

We had anticipated it on yesterday’s analysis: Ethiopia, air raid in Mekelle and international war on fuel for Tigray

The Ethiopian government confirmed that only one military target had been hit.

Kibrom, Executive Director of the Ayder Comprehensive Specialized Hospital confirms the opposite:

“An airstrike in a civilian neighborhood against the Mekelle children’s playground killed 2 people, injured 8. Ambulances are still carrying more victims”

“We do not have essential medicines and supplies in our emergency room and victims of air strikes, women and children are arriving. We cannot save them. What is this situation called? What name can you give it? Besieged and bombed. “

“At midday, a plane (…) dropped bombs on a residential area and a nursery in Macallè. Civilians were killed and injured “

Shortly thereafter, the federal government announced in a statement that, while remaining “fully prepared” to hold unconditional talks with the TPLF rebels, it intended to “carry out actions against military forces (…) opposed to peace”. He called on the people living in Tigray “to stay away from areas where rebel military equipment and training facilities are located.”

“Government spokesman Legesse Tulu said the news of the civilian victims was” fabricated lies and dramas “and accused the Tigray authorities of” having unloaded body bags “. He denied that the government attacks hit civilian structures and claimed that they only targeted military sites. “

Unfortunately, however, the service of Tigrai TV leaves no doubt about what happened : it immortalized the inhuman atrocities of lifeless and torn bodies.

NOTE: out of respect for the sensitivity of Focus on Africa readers and for not participating in the usual “horror pornography” we share the less bloody images.

There is also no doubt that the only military force that has firepower via aircraft and drones is the ENDF – Ethiopian National Defense Forces, the Ethiopian army.

Noteworthy is the satellite photo published by OSint Wim Zwijnenburg:

“The end of the truce between the Ethiopian and Tigray Defense Forces resulted in air strikes and civilian deaths in Mekelle. Witnesses said drones were involved. The picture shows a TB-2 Bayraktar of Turkish origin at Samera airport on 25 August 2022. “

Air strike that takes place in Tigray after the departure of a new major military offensive that began on 25 August 2022.

Yet another air attack on civilian area which is just one of the many that unfortunately sowed death among thousands of adult civilians, children of Tigrinya ethnicity as well as Eritrean refugees targeted in IDP camps in western Tigray. The attack took place in broad daylight and in an urban area: the same dynamics as other attacks.

As formally and dutifully must be done to maintain a certain good neighborly position, there are many messages from the realities of the international community, from America and Europe through their senior officials: messages of condolence and denunciation and appeals for a ceasefire with calls for peace negotiations to begin as soon as possible.

Unfortunately, the departure of a new war front pushes the negotiations for a peaceful resolution between the Ethiopian government and TPLF – Tigray People’s Liberation Front even further. Even the African Union with the mediation Olusegun Obasanjo are making us wait.

In all this, it must be avoided that it is a facade peace, synonymous with a fixed-term peaceful truce as occurred with the peace agreement between Ethiopia and Eritrea following the border war of 1998/2000. The hope instead that for the millions of Ethiopians and people who have been suffering too much from the atrocities of abuse and violence, is that it can be peace with a capital P, the one that determines a society in which people can live with respect for others. even if of different opinions.

Ethiopia, report of the catastrophic health situation in Tigray

Millions of people in Tigray, a northern regional state of Ethiopia, have been living for…