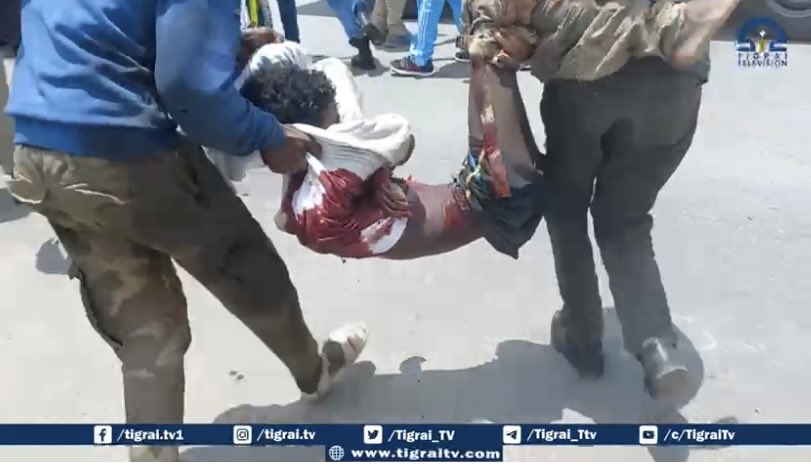 Immediately after the start of a major offensive in the border area between Amhara and Tigray, on the same morning of 25 August 2022, David Beasley, the head of the WFP – Word Food Program, denounces :

“A group of gunmen entered the WFP compound in Mekelle and forcibly seized 12 tankers filled with over half a million liters of fuel. This fuel was recently purchased by WFP and arrived a few days before the theft. “

The “group of gunmen” referred to the dissident group of the TPLF – Tigray People’s Liberation Front.

To reinforce the denunciation of David Beasley come the clear and direct positions of Samantha Power, director of USAID:

“USAID strongly condemns the theft by the TPLF of over 150,000 gallons (approximately 600,000 liters) of fuel for WFP’s work and harassment of humanitarian workers. Stopping efforts to help feed Ethiopian civilians is deeply cruel and we ask the TPLF to return the fuel and respect humanitarian operations. “

“I demand a swift return of the stolen fuel from WFP. Without fuel, food delivery in Tigray is not possible. The lives of millions of people depend on it. “

Janez Lenarčič who on 21 June 2022, in his first diplomatic visit to Ethiopia and Tigray, had declared to the press :

“I see no reason to keep the ban on banking, electricity and telecommunications services in force”

Rightly and in any case the crimes must be denounced and judged as such as well as those responsible.

However, this does not seem to be the case for the Tigray government. In a statement in his response, he defined these accusations as “incendiary” and stated that:

“He simply asked for it to be reimbursed in accordance with the agreement we had.”

“The fuel will be used to run basic services such as hospitals, clinics and other health facilities across Tigray that have been looted and damaged by the invasion forces.”

The statement continues with the hope that the misunderstanding can be resolved:

“We remain committed to working with humanitarian partners as they work hard to address the catastrophic humanitarian crisis raging in Tigray. In this spirit, we are ready to resolve all outstanding issues under discussion with WFP officials ”.

In fact, the reference to the agreement between WFP and the Government of Tigray referred to the loan of fuel from the latter to the humanitarian agency.

This thesis was refuted by two pieces of evidence that were shared virally on social media.

The first are the statements of the UNOCHA report dated January 13, 2022 where you can read:

“Food aid will be transferred from Mekelle to the affected population with fuel lent by local authorities.”

Note further supported by a receipt shared by Kjetil Tronvoll, Professor and Deputy Rector for Research at Oslo New University College and Director of Oslo Analytica and analyst of the Horn of Africa , with whom he asks the head of WFP, to be able to clarify position and give transparency on the reality of the facts. The professor also points out the exact amount of fuel supply. 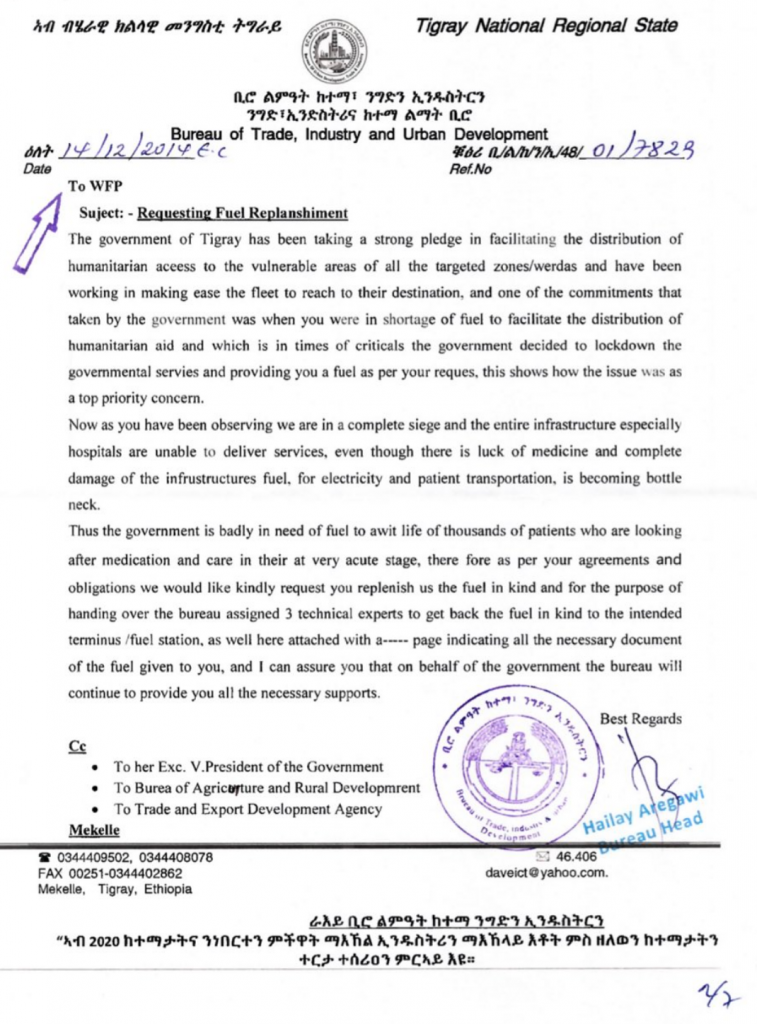 Tigray spokesman Getachew Reda accused the Ethiopian government of sending “botched militias” to the front to provoke the fighting, saying the hostilities were not in Tigray’s interest.

“We were counting on the international community to help open the blockade and break the siege imposed on the people of Tigray. We need humanitarian aid for our people, we need medicine – we need everything for our people. If anything, we’re the last people to start fighting right now, ” she told BBC Focus on Africa radio.

Asked if he had a message for Ethiopian Prime Minister Abiy Ahmed, he replied:

“He cannot fight to get out of the crisis … He definitely risks the disintegration of the Ethiopian state”.

Getachew said the Tigray government was ready and happy to sit at a negotiating table under the premise of “unrestricted humanitarian access” to Tigray and that the constitutional status of the Tigrinya regional state was guaranteed.

“Then the rest will be a matter of give and take. We are more than ready to live with any government as long as this basic minimum of the Tigrinya people’s right to self-determination is fully respected ”.

Today, August 26, 24 hours after the new major offensive began, news shared by Tigrai TV arrives that the urban area of ​​the Tigrinya capital Mekelle was the scene of an air raid in which adults and children were killed. The death toll is yet to be ascertained.

Background of fuel for humanitarian deliveries

From 12 July 2021 to July 2022, in one year, only 37 fuel trucks arrived at their destination in Tigray, delivering just over 1 million liters: only 5.5% of the total amount that would be needed in one year to respond significantly to the humanitarian catastrophe.

“ On 3 August, 600,000 liters of fuel or 12 tankers arrived in Mekelle. The fuel will support the delivery of more than 95,000 tons of food and other life-saving supplies from the Mekelle warehouse to the affected population in Tigray. This brings the total amount of fuel entered into the region since April 1 to approximately 1.8 million liters, but it is estimated that two million liters are needed each month for humanitarian operations, including fuel for incoming humanitarian convoys and leaving Tigray ”

Background on the crimes and victims of the genocidal war

In addition to this, what is refuted is the low estimate of the 500,000 dead, killed directly by the genocidal war or as a result of lack of food, water or medical care.

What is certain are the estimates, at the tip of the iceberg, of the hundreds of thousands of women of all ages and ethnicities raped in revenge.

What is refuted are the tens of thousands of illegal deportations and detentions of Tigers of all sexes and ages by Ethiopian police forces and detained in unknown places and in hellish conditions in violation of humanitarian law.

What is certain is that the negotiations for a peaceful resolution are long in coming and that millions of lives are still suspended for more than 22 months now, in a limbo in which they have been denied the right to basic services, the right to treatment. and today again in the midst of a war front not theirs.

Complaints about the victims, massacres and crimes of war and against humanity committed against the Tigrin people by the government forces, the allies of the Amhara special forces, the Fano militias and the Eritrean troops, have never been so swift and worthy of underlining with consequent action taken by the international community as was the case for the denunciation of the 12 tankers stolen a day ago.

In all this context, the words of Nelson Mandela who fought all his life against apartheid and white supremacy come to mind:

“When a man is denied the right to live the life he believes in, he has no choice but to become an outlaw”

Ethiopia, report of the catastrophic health situation in Tigray

Millions of people in Tigray, a northern regional state of Ethiopia, have been living for…