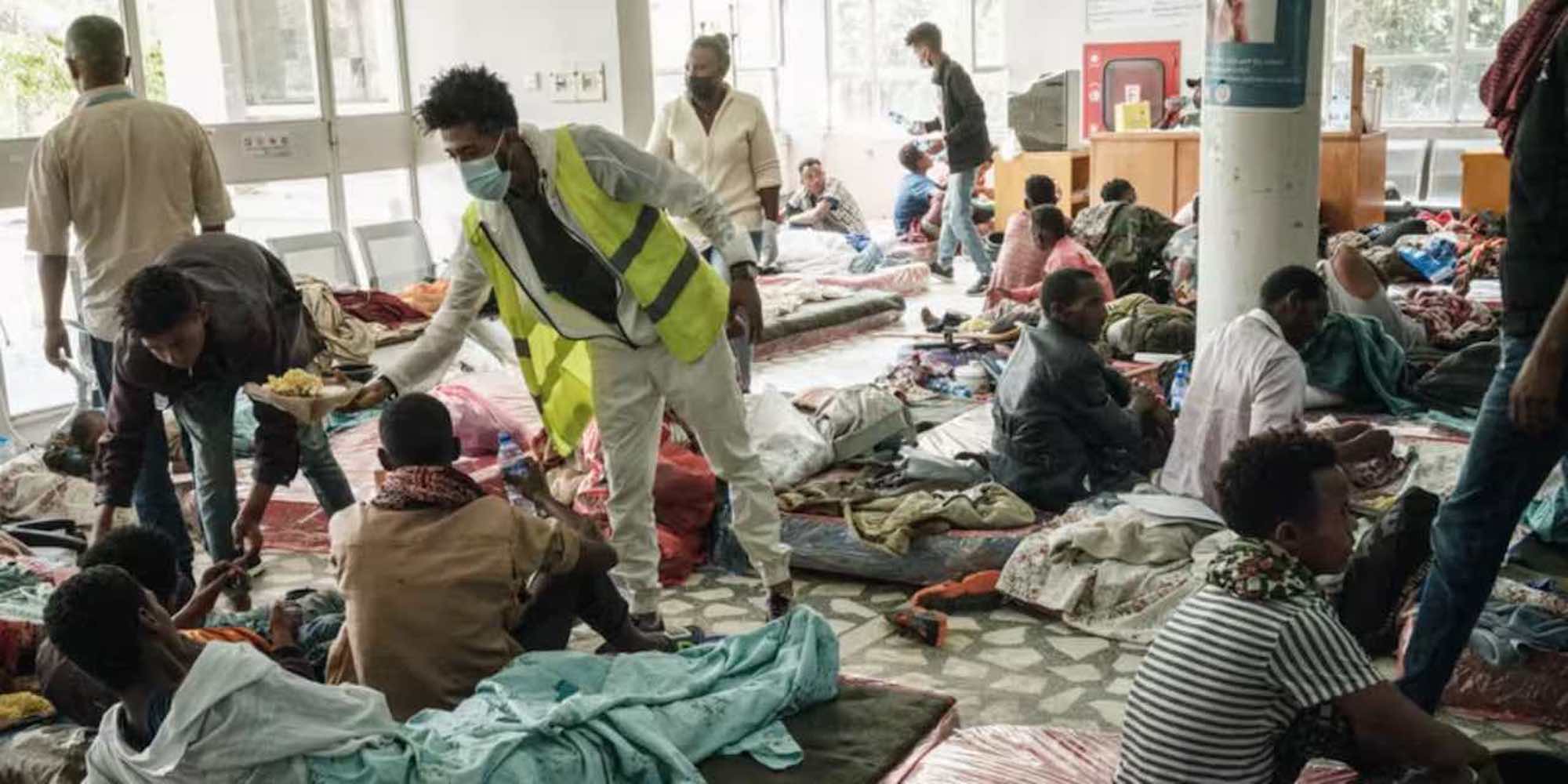 Millions of people in Tigray, a northern regional state of Ethiopia, have been living for over 22 months with the consequences of violence and abuse, massacres, deportations, arrests and illegal detentions: repercussions of a war with ethnic and genocidal implications that took place in the total blackout electricity and telecommunications, unheard and forgotten by the world. Millions of Tigrayans, even today, are denied their rights as individuals, as human beings, as well as the right to the protection of health and life itself.

Below is the full report from Teana Sabawian (ጥዕና ሳባውያን), student professionals and allied health professionals who have formed a volunteer collective to work together to rebuild health care in Tigray.

Months of conflict & a siege imposed by the Ethiopian government have pushed the healthcare system in Tigray to a complete collapse, increasing the likelihood of mass deaths from preventable & treatable conditions as well as the risk of epidemics of contagious diseases.

Since the onset of the war on November 4, 2020, Tigray’s healthcare facilities, including pharmacies & pharmaceutical industries, have been systematically & intentionally destroyed & looted by the Ethiopian National Defense Forces (ENDF), Eritrean troops & allied militia. According to reports, Tigray’s healthcare facilities, including clinics, hospitals, pharmacies, pharmaceutical industries, and ambulances were systematically and purposefully destroyed and looted by the ENDF, Eritrean Army troops, and allied militia.

In March 2021, Doctors Without Borders (MSF) released its shocking findings regarding the destruction of health centers in Tigray. Nearly 70% of health centers were looted and over 30% destroyed, leaving a mere 13% functioning normally. Even when aid organizations restocked health facilities, soldiers, especially Eritrean Army soldiers, returned to loot, again and again, showing the sinister intent to deprive the civilian population of access to life-saving healthcare. After visiting Tigray, Joseph Belliveau, Executive Director of MSF Canada wrote “Today, most of Tigray’s health system lies in ruins, vandalized and looted by soldiers. The destruction is so thorough that, during my recent five-week assignment in Tigray, I did not find a single room in a single health facility outside the major cities that were not ransacked.” Another investigation led by Tigrayan healthcare professionals and published in the journal BMJ Global Health detailed the war’s gross impact on Tigray’s healthcare system.

Following months of painstaking evidence collection, the health professionals found none of the 712 health posts were functional. This is all the more shocking because prior to the onset of the war, the Tigray region had one of the most efficient and successful healthcare systems in Ethiopia. Amongst the most profoundly affected by the complete collapse of Tigray’s healthcare system are the thousands of Tigrayan girls, women, boys, and men who were raped by ENDF soldiers, Eritrean soldiers, and Amhara militia as rape has been used as a weapon of war.

Sadly, the global Health Resources and Service Availability Monitoring System (HeRAMS) estimates that only 2% of the health facilities in Tigray are able to provide Clinical Management of Rape Services due to the ongoing siege imposed by the Ethiopian government.

For months, the Ethiopian government systematically blocked humanitarian aid to Tigray, a war crime recognized under the Geneva Convention. This aid blockade took different forms, from blatant obstruction of passage to aid convoys, to looting of aid trucks and attacks on drivers that left them fearful for their lives. This left tons of aid sitting in poorly air-conditioned warehouses where it got spoiled and expired, effectively crippling aid agencies from restocking their supplies and rendering their life-saving services.

In addition, the European Union’s humanitarian airbridge flights delivering humanitarian aid to Tigray were forced to remove medicine and medical supplies from their Tigray-bound humanitarian flights. Tigray’s children and pregnant and lactating mothers were the most severely affected by the humanitarian blockade with estimates of over 20,000 children experiencing wasting and tens of thousands of pregnant & lactating women experiencing severe malnutrition. As a result, Ayder Referral Hospital in Mekelle was inundated with severely malnourished & moribund children and newborns with severe deformities.

Drone attacks have also forced aid agencies to suspend activities. Satellite images and videos show towns completely turned to rubble following drone attacks and airstrikes. The Ethiopian government also timed aerial strikes to coincide with the landing time of a UN humanitarian flight, causing the UN flight to abort the landing and subsequently suspend humanitarian flights. Moreover, the Ethiopian government has also used drones to inflict total carnage on civilians, with a drone attack on a school compound hosting IDPs in the town of Dedebit killing 57 and injuring scores. Given that drones are purported to be highly precise, this was not an attack that missed its target, but rather the civilians were the targets. Human Rights Watch noted that the attack on this IDP center likely constitutes a war crime. In another attack, the town of Togoga was bombed on a busy market day with health professionals reporting that they were denied access to the injured and dying by Ethiopian soldiers, starkly revealing the intent to inflict carnage on civilians in Tigray.

Tigray was once a shining example of a region that implemented an effective and efficient healthcare system that catered to citizens even in the most rural areas. In fact, Tigray’s flagship hospital, Ayder Referral Hospital, not only provided healthcare to Tigrayans but also to many from Afar and Amhara regions. Now, after systematic destruction and plundering, Tigray’s healthcare lies in ruin, unable to support even its most at-risk citizens. Even with relative calm in parts of Tigray, it has been impossible to rebuild Tigray’s destroyed healthcare facilities because the Ethiopian government continues to deny Tigray its share of the federal budget as well as essential services, including banking, electricity, telecommunication, and water, that are necessary for rebuilding infrastructure.

The intent to deny Tigray’s population access to life-saving healthcare also manifested in other forms. Aid workers were constantly subjected to endless red tape, expulsion, harassment, detention, & death. More than 20 aid workers have been killed, including three MSF staff who were killed in June 2021. In August aid agencies providing life-saving assistance to Tigray’s battered population were expelled from Ethiopia, placing countless lives dependent on these aid agencies in grave danger. The security briefing sent to humanitarian workers also indicated the prohibition of entry of “medication, including prescription, multivitamins or any self-medication, dental flossers replacement of toothpicks, etc.” Even after aid workers fulfilled the security requirements, they were subjected to harassment when they arrived for a humanitarian flight to Tigray. Moreover, across Tigray, many schools and health facilities were forcibly converted into military barracks by both the Ethiopian and Eritrean armies, denying the populace of facilities that provided essential and life-saving care. Many of these facilities were later discovered marred with graffiti containing hateful language and threats to exterminate Tigrayans, lending a clear insight into an intent to inflict collective harm on the Tigrayan people.

Throughout the conflict, public officials have resorted to hate speech, propaganda, and incitement while also calling for, denying, and justifying the engineering of the humanitarian catastrophe in Tigray. More recently, Deputy Prime Minister declared a government policy to severely restrict the amount of fuel entering the region which automatically thus incapacitates generators powering essential hospital equipment.

The collapsing healthcare services in Tigray have been worsened by the blockade of essential services including electricity, water, banking, and communication by the Ethiopian regime. This is combined with banning entry of items such as pills needed to decontaminate water.

Essential public servants such as midwives, nurses, doctors, and those working in safety, security, and other basic social services, have not been paid for more than a year. Thus far, they have only received a fraction of the food aid they need and they can’t access their hard-earned money as banking services have been suspended by the Ethiopian Government.

Voices from Tigray are stifled as all communication has been blocked by the Ethiopian government. According to Access Now, a global organization that defends and extends the digital rights of users at risk in the world, “The shutdown has a deep impact even on those who survive violence. People can’t get adequate access to healthcare in a broken, disconnected system. With routine and daily communications cut off, people inside and outside of Tigray cannot reach their loved ones and are suffering from psychological and emotional trauma.”

To highlight the impending catastrophe, health experts from within and outside Tigray have written desperate pleas to the world that lays bare the suffering of the people of Tigray and the impending catastrophe. Ayder Comprehensive specialist hospital in Mekelle, the biggest hospital in Tigray serving more than 300,000 patients announced closure and warned of being on the brink of total paralyzation. Other health facilities in Tigray have also ceased operations.

Health care workers from Tigray continue to consistently highlight the most urgent needs including those associated with the treatment of chronic illnesses needing life-saving intervention. Patients with chronic conditions including diabetes, dialysis, cancer, & HIV/AIDS have been left without the critical medical services & medicine(s) they need to survive. They are, in the words of the patients themselves, “awaiting their death.”

According to a news report in June 2022, the Fistula Hospital in Mekelle was forced to close due to a lack of medicines leaving women and girls who have developed a fistula (abnormal connection of two organs due to injury and causes loss of bowel control) that was caused due to sexual violence as well as lack of services for pregnant women.

Despite repeated pleas, in Tigray, there is not an adequate amount of resources and medical supplies that enable support for those in need of medical care and medicine.

The true extent of the status of healthcare and the resulting human suffering remains hidden as full access to Tigray continues to be blocked by the siege imposed by the Ethiopian government. Despite these limitations prohibiting a complete picture of the terrible consequences of healthcare collapse in Tigray, there has been visual documentation of the agony, including in children, women & elderly.

In a recent documentary by journalists that smuggled themselves into Tigray, it has been documented that severe hunger and lack of medicine and medical supplies are devastating communities and taking countless lives.

According to the most recent reports, healthcare in Tigray is crumbling, creating the perfect grounds for disease outbreaks to occur, including outbreaks of COVID-19, cholera, malaria, tuberculosis, meningitis, and more. In fact, life-threatening outbreaks are currently posing a major problem for the local communities. Should such outbreaks occur, the impact would be devastating as the population has been compromised by high rates of malnutrition and children have had no childhood immunizations since the conflict started.

Photo : People receiving medical treatment at the entrance hall of Ayder referral hospital in Mekele, the capital of the Tigray region of Ethiopia.