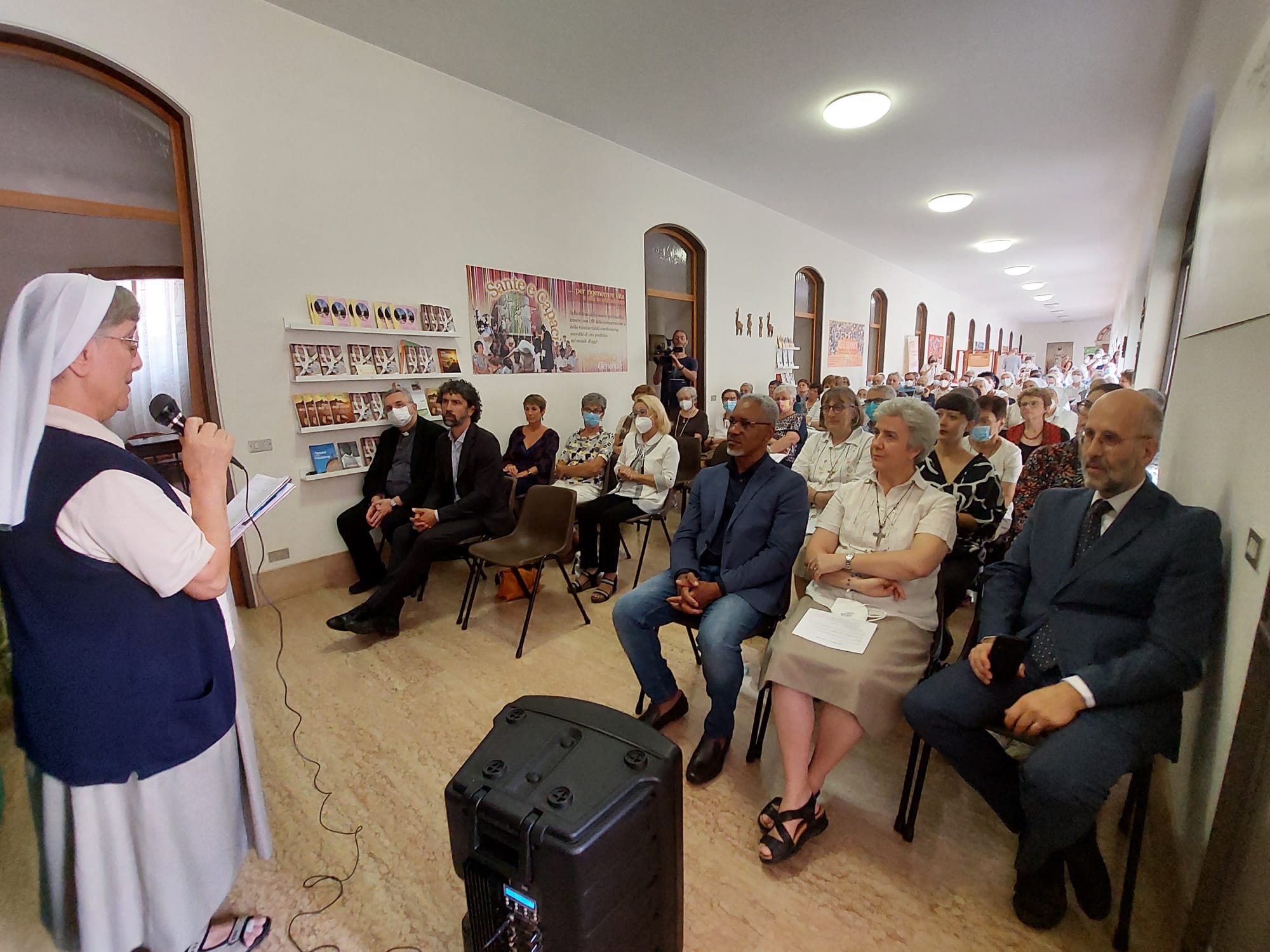 “The exhibition, which starts today, is part of a much larger project, and responds to the deep desire we had on the occasion of our 150th anniversary. We wanted to tell a living story, to convey a story which walks alongside the city of Verona and all our missions in the world. We also wanted to be able to offer this house to our new generations as a place where they can get to know our great historical and cultural heritage, which will enable every Comboni Missionary sister to strengthen her sense of belonging and identity’. This is how Sister Luigia Coccia, Superior General of the Comboni Missionary Sisters, described the significance of the exhibition ‘A promise that continues’, which opened this morning on the premises of the mother house in Via Santa Maria in Organo 1, Verona. An appointment organised to commemorate the 150th anniversary of the foundation of the Institute. Actually, on 14th September 1872, Daniel Comboni accompanied the first postulants (first stage of formation to become a nun, Ed.) to the newly opened mother house in Verona.

What is more, the celebration was also an opportunity to remember Sister Maria De Coppi, who was killed in Mozambique during a jihadist raid last week. Sister Ida Colombo spoke about Sister Maria’s love for the people. The mayor of Verona, Damiano Tommasi, also remembered Sister Maria, highlighting her courage, both as a woman in difficult lands and in her choice of consecrated life. ‘I am very honoured to be here to celebrate this anniversary,’ he said. ‘What the city of Verona has managed to be in the world is also thanks to these people and this reality. We must feel very honoured to have these great ambassadors in the world’. And then, turning to the nuns: ‘Thank you for how you represent our city in the world. We are proud of you. I wish you a happy anniversary for your 150 years of history!’ Sister Maria Rosa Venturelli, who introduced the 150-year anniversary video, produced by Mediacor Srl, greeted the relatives of some sisters present in the hall, including those of Sister Teresa Grigolini and Sister Giuseppa Scandola (Scandola and Grigolini were among the first five sisters to reach Africa, Ed.)

The importance of the archive for the preservation of memory was the theme of the video-interview to Sr. Mariateresa Girola: “The archive,” she said, “is a treasure chest containing precious things, which we draw on to discover the good and the beautiful in our history. We can compare it to a seashell: the sound of the sea remains audible even when brought to the surface’.

Paolo Pellegrini, CEO of Mediacor Srl and Margherita Iperique of Calibro Zero explained how the continuation of the project “A promise that continues” will be articulated so that the story of the Comboni missionary sisters will continue to be audible. “The stories must be told to the outside world in an effective manner,” Pellegrini explained, “The entire historical and cultural heritage of the congregation must be gradually unveiled. We will do it by moving here the historical archive from Rome so that it can return to the heart of the mother house and also by turning some places in the premises of the mother house into exhibition spaces, equipping them with photographs, short videos, objects and explanatory panels in five languages. In these places, the public will be able to learn about the life and works of the Comboni missionary sisters”.

“Since the exhibition was conceived as an itinerant exhibition, the theme of travel spontaneously became a source of inspiration,” added Margherita Iperique, “an inspiration which gave us many cues and offered many possibilities. Specifically, we started from the suitcase, the container in which all the objects of the exhibition were brought here. Itinerant means that the exhibition can be easily transported from one house to another, both in Italy and abroad, because the set-up is modular, flexible and adaptable to all types of space. The panels can be folded and carried like suitcases to various communities’.

“The diocese of Verona is proud of the Comboni Missionary sisters, who are a living part of its reality, not only because the mother house is located here in Verona, but also because many sisters have left this territory to go and serve in missions all over the world,’ said the vicar general, Monsignor Roberto Campostrini, who also conveyed greetings from the outgoing bishop, Monsignor Giuseppe Zenti, and the incoming bishop, Monsignor Domenico Pompili. The 150th anniversary exhibition speaks not only of the fruitfulness of the Comboni missionary sisters’ history but also of how their history can become fruitful tomorrow in the lives of many brothers and sisters in different parts of the world who might welcome the beauty of the missionary call, hear the voice of the Lord and become witnesses of the beauty of His Love’.

“How do we feel now?” asked to those present, Sister Esperance Bamiriyo, superior of the mother house in Verona. “Good,” they all replied. And she continued: “We are in tune with the theme of this Jubilee, a promise that continues. May the promise continue with each one of us! Each one as he or she can. We are very grateful for the presence of so many friends today. We thank the Lord for what He has already done in us, what He is doing and what He will do, so that our history may always continue’.

The speeches were coordinated by Simona Borello, project manager of Mediacor Srl, the company in charge of the project which gave birth to the exhibition and which will continue to redefine the premises of the mother house in order to accommodate the historical archive arriving from Rome and to create a permanent exhibition of photos, panels and objects related to the history of the Comboni missionary sisters.

Don Giuseppe Mirandola, director of the Mission Office of Verona, has made himself available to organize a vigil prayer in memory of Sister Maria De Coppi, on 6th October, during the General Chapter, which will gather in Verona sisters from all over the world.

The exhibition will remain in the mother house in Verona until 25th October. Then, it will be carried to different locations of the congregation. To visit the exhibition is strictly required to book in advance at 045.8006639.