The new promise of world technology is called the Metaverse. Whatever it is, the Metaverse can be understood as a three-dimensional spatial Internet consisting of different environments (the “worlds”) between which one can move either on foot, by plane, or by instantaneous teleportation.

As with the classic version of the Internet, the new infrastructure will be available where there is no other infrastructure, i.e., roads, highways, and banks. The metaverse requires large investments and is also proposed as a reference model for other IT services  (artificial intelligence, quantum computing) which will gradually change to optimize time and cost.

It is not yet certain that the Metaverse will develop in the breadth that many have announced. Even partial development, however, would create new skills and thus new jobs of some duration that could bring income to less infrastructurally developed areas, in South America, Asia and especially Africa.

The size of different geographic areas and their populations eludes most people. China and India have about the same population of 1.4 billion people, but China’s area is about three times larger.

It is often said that the most digital State in the world is Estonia, which is, however, small (45,000 km²), without mountains, sparsely populated and peaceful. Africa, a continent, is 30 million km² and has deserts, mountains and internal struggles. Any infrastructure in Africa is a very big challenge. And the Metaverse is a digital service delivered over a more powerful communication infrastructure than the current Internet.

So what is the Metaverse?

The metaverse is a three-dimensional evolution of the web. The Internet is a system to find and organize information and the Web is a graphic version. We interrogate the Internet by connecting to websites, reading and exchanging information such as texts, audio and video images that we receive on a screen with or without sound. In the Metaverse, we connect in three dimensions, with a viewer hosting two screens that together provide our senses with a realistic image with depth in which we also physically move. Instead of seeing a photo of a shop or landmark, we can move around in it. A larger article of mine about the Metaverse is available at this address.

Of course, this development has not yet been fully realized, but many multinational companies are investing large sums of money to steer technology in this direction.

These include the American Meta and the African MTN.

So, what is the situation in Africa?

The difference between Africa and the rich world is unmistakable. In the rich world, the supply of “builders” of this world, which we can also call software developers, is very large. They are companies or professionals that offer services and a large audience willing to buy expensive screens and increasingly powerful networks.

From a consumer perspective, there are very few potential buyers on the Metaverse in Africa, but there is some availability of service providers and software developers. These professionals have limited opportunities to sell their skills locally and reach out to new generations.

Any expansion of the IT network and infrastructure on the continent, on the other hand, leads directly to more work.

Kenya, Nigeria, Rwanda or any other location can more easily sell these services if the Net connects them to the world.

Europeans have only recently realized the value of remote work: In Africa, this opportunity would have an extremely higher value.

The small number of data centers and the availability of few connections, usually directly between an African and a European city, have led to a colonization of African traffic. In this case, something similar happened to European traffic. Inter-African networks and data centers are needed.

Telecommunication networks are evolving, and the availability of skilled telework to customers in richer countries will therefore expand long before a single market for consumers emerges.

The evolution in the number of data centers and the decline in prices have led to a shift in data traffic. Previously, it was mainly directed towards Europe. However, cloud services are still developed in the United States. Inter-African traffic, based on generation and consumption of African content within the continent, is increasing in some regions, thanks in part to certain local services known as “edge computing”, which we hear about  – in South Africa, for example.

In addition to mobile, fixed line subscriptions are also increasing. Let us take a look at the telecommunications situation on the large African continent.

The African network is sparse, slow, and very expensive. There are few fixed lines, while wireless networks are often 3G. 4G availability is also low. In some areas, 5G is spreading nationwide, both in cities and countries: South Africa, Kenya, Nigeria and Tanzania are among the first.

It is very difficult to think on a continental scale today.

It would be more legitimate to hope that the connection came from the sky, via a satellite. Elon Musk’s Starlink, made up of thousands of satellites that form a global infrastructure – fast but with significant delays, communicates through satellites that are placed very far from the Earth’s surface.

Starlink began providing services in Africa in mid-22. At the beginning, prices are very high compared to the average income of most people. The first states to be served are Nigeria and Mozambique, with speeds over 100 MB /s. Clearly, in this case, even if the price is intentionally low, the number of users will be very small for a long time.

Imagining that the future of social networks will add a third dimension, Facebook has directed everything in this direction, even changing its name to Meta. Its proposal also focuses on Africa: the company of Zuckerberg, founder and CEO of Meta, has announced investment programs in 16 African countries for 50 million dollars in two years. According to some sources, the investment will add $40 billion to the GDP of the 16 countries over the next few years.
At the same time, The AR/VR African Metathon, or Imisi-3D’s marathon (hackathon) for virtual and augmented reality in Africa, is coming to the 2022 Edition.

Another initiative in this direction is Africarare, the MTN multiverse. In 2021, the pan-African telco offers a 3D virtual reality experience set in Ubuntuland and linked to a virtual currency economy. It is one of the worlds to be absorbed into the overall metaverse.

Some European and African companies have invested in Africarare. Austria’s WDL (World Data Lab) has acquired a village of 36 plots for a data science metaversity and other virtual initiatives, and MTN has established an area of 144 plots.

From the beginning, there has been a lot of African art: the permanent galleries Mila (tradition) and Inuka (rise), the avatars modeled after the bizarre Normunda tribe of South Africa’s Norman Catherine, and the music of Boity (Boitumelo Thulo), an all-around artist between rap, TV and business who has also launched ten thousand avatars.

Other expected initiatives are the DAO (distributed autonomous organization),

Companies that are completely controlled by a specific software, and play-to-earn gaming, which combines a simple Pokèmon-type game with the possession of figures and accessories that can have an even higher value as NFT.

The metaverse is a great opportunity for skilled telework. Also for the metaverse, as in previous occasions, Africa is blocked by the struggle between development and colonialism. The issue of investment in the various macro sectors is now governed by complex international rules that are changing before our eyes. On the other hand, policies at the global level have changed and cooperation continues to take new forms. Pressure from China has changed the approach of other macro economies, including the US, EU and even Japan.

Perhaps satellite connections and local data centers will enable this change of course, allowing the direct sale of rich African creativity to the rest of the world.

An African girl in the Metaverse as imagined by Dall-e, the AI-based image generator

A Virtual world as imagined by Dall-e, the AI-based image generator

Some images from the virtual world AfricaRare. 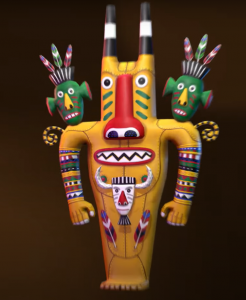 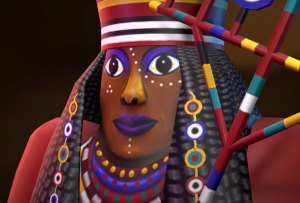 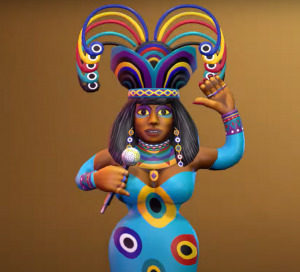