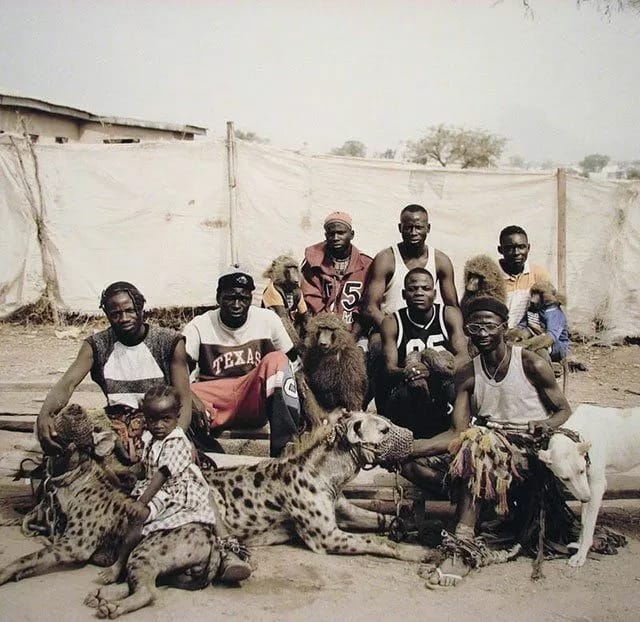 Africa is a huge continent that continuously offers the possibility of discovering new worlds and things that we in the western world would think impossible.

Since we can’t travel because of COVID, the only way to visit Africa is by navigating the Internet, and with a touch of imagination and using the right keyword, I accidently found myself reading about  Pieter Hugo, a South African photographer who published the book, The Hyena and Other Men, a series of wonderful and detailed photographs documenting the life and story of the Gadawan Kura, Nigeria’s hyena handlers.

The photographs were taken near Lagos and portray these men, described as street attractions or gurus (but not seen favorably by the local press who consider them criminals), travelling around the city and to various nearby villages with hyenas on leashes and, in some cases, even with snakes around their necks or with baboons.

Respected but at the same time feared by the inhabitants of the “host cities”, the Gadawan Kura take pride in the appeal and strength of the hyenas and use this to their advantage by staging performances enveloped in mystery and magic brews  that turns into a source of revenue with the sale of medicine to the people who stop and watch them.

The images speak for themselves and once again, Africa leaves us speechless and teaches us that imagination can be real. Criminals, gurus or street attractions, it doesn’t matter, the Gadawan Kura are without the shadow of a doubt one of the most original and fascinating things in the world.