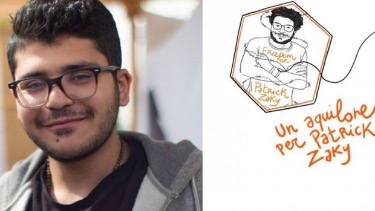 The kite designed by Gianluca Costantini at the Arco della Pace in Milan; a metronome at the Pantheon in Rome to mark the more than 240 days in detention; a blow up of his face in Piazza Castello in Turin.

This is how on Thursday, 8 October, Amnesty International Italia and its partners (Articolo 21 and Festival dei diritti umani (The Festival of Human Rights), with the added participation in Rome of Focus on Africa, will commemorate the eight months Patrick Zaki, the Egyptian student from the University of Bologna, has been detained. He was arrested on 7 February and formally charged the day after.

The mood on the streets is difficult to predict: will it be to celebrate his release or to relaunch the campaign for that goal? It all depends on the outcome of the umpteenth hearing on the renewal of his preventative detention, scheduled today and of which the outcome will be communicated a few hours before the mobilizations in the three cities.