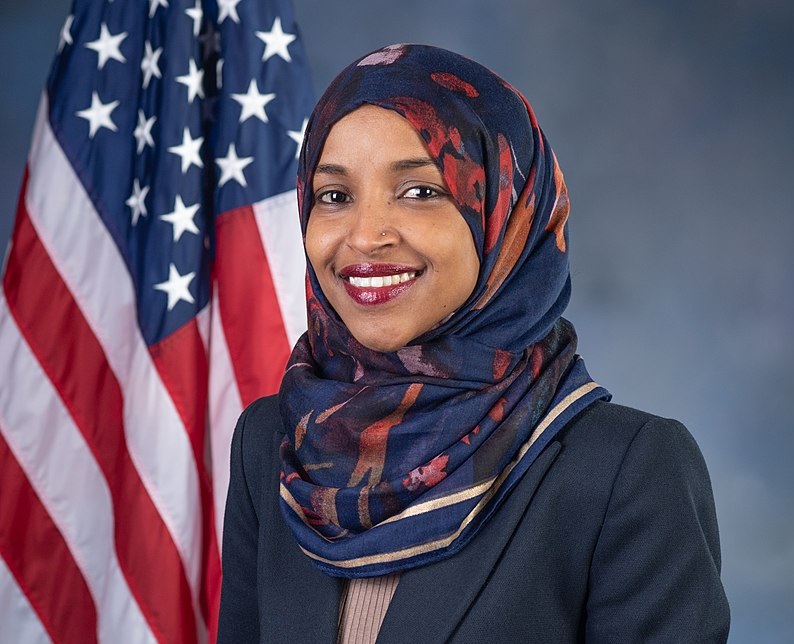 At times, history really can be incredible. Even in the way in which it places its protagonists. At the same time a girl, Mende Nazer, destined to become a worldwide symbol against slavery, was born in the Nuba Mountains in Sudan, Ilhan Omar, destined to become a member of the United States Congress, came into existence in Mogadishu, Somalia.

It only takes a look into Ilhan’s eyes to grasp her courage and greatness. It only takes hearing her speak, listening to her proposals, the latest one being that housing is a fundamental human right and would help in the struggle against homelessness. It only takes knowing her life story and her vision of the world to fall in love with her.

Ilhan has experienced poverty, fear and hunger. She was a displaced person for four years in a refugee camp in Kenya before her family moved to the United States where she began her battle for human rights and for human dignity.

She was always a bright student and became an active supporter of the Democratic Party in her teens. She became a cultural mediator in high school where she proposed to build bridges and break down the barriers, virtually, that separated different ethnic backgrounds. Just like she is doing now in Congress.

In fact, she herself said in an interview, “There was tension amongst the different ethnic groups in high school. The black kids born in the US, the black kids from Africa, the Hispanic kids, the American Indian kids, the new immigrants from different origins, and even between Arab Muslims and East African ones. After all, if you put such heterogeneous kids together without creating good programs to build relationships between them, you’ll inevitably end up with racial and cultural clashes. Again, I tried to build bridges. I knew I had to work hard in order to create a cohesive community, even if the only scope was to make it easier for everyone to survive high school. It meant finding students who, like me, thought of themselves as bridge builders and who would work with other students, the teachers, the schoolboard, the principal, in brief, everyone. So, we created an ambiance and in the end we all ate together, talked for hours, shared experiences and tried to mediate conflicts before they broke out into violence. It made my last years of high school a very powerful and gratifying experience.”

Ilhan’s message is simple and profound: she sees Islam as an extraordinary religion of peace, she sees an environment built on consensus building without populism of any kind; the belief that others can work together on the strength of ideas, proposals, policies and beyond; she envisions a world based on mutual respect, on the culture of encounters, friendship and sharing.

No other American politician combines socialism, integration, multiculturalism and a global view on these issues with such overwhelming beauty.

Ilhan is a contemporary figure, a champion of our multipolar world, a symbol and an example of national cohesion and reception that becomes mutual enrichment. She has been able to transform diversities into strengths. She has knocked down obstacles with the power of her story. She has never been ashamed of who she is, her origins, her suffering, her hijab, nor of her dark skin, African blood and the painful and desperate history of her people.

Ilhan is not afraid to use the word ‘identity’ because she is an example of positive identity, of freedom, of an inner beauty that becomes a collective passion and finally, of good policies that serve the community.

She wants to go to Washington to build more bridges at a moment when many, even her own party, are trying to erect fences and oppose a change that, in fact, is already tangible.

However the presidential election may end next year, there is no doubt that the United States has changed for the better and that nothing will be as it was before. This is the black, Spanish, feminist America, the country where minorities become majorities walking hand-in-hand, the America in which a young Somalian and Muslim woman proudly supports an elderly Jew from Vermont placing the massacres of her people on the same level as the Shoah Sanders’ family escaped in a historical moment rife with Trumps and Netanyahus. This America constitutes something immense, something that goes beyond the policies, the election and the contingencies.

This America cannot lose because the blood of the future flows in its veins. The blood of a world that will come to life, no matter how some will try to prevent it, by crushing the old conventions, fears, concerns,  struggles and miseries of a past destined to implode because of its own inconsistencies.

And Ilhan, whose smile is overwhelming and whose love for others warms the heart even thousands of kilometers away, is the emissary of this idea of the world.

Ilhan can’t become a presidential candidate because she wasn’t born on American soil, but her daughter has promised that she will run and become president one day. We like to imagine that it will actually happen, that Sanders is just the first step that sparks a movement that, objectively, will go far beyond him. Not surprisingly, his campaign slogan is, “Not me. Us”. A testimony to an awareness that politicians rarely express with such explicit boldness.

I can already imagine Ilhan’s daughter at the White House thirty years from now. I see her African beauty and the magic of a story, personal and yet familiar, able to build the new “American dream”, no longer veined with imperialism but with hands outstretched to the rest of the world. When this happens, it will be wonderful.