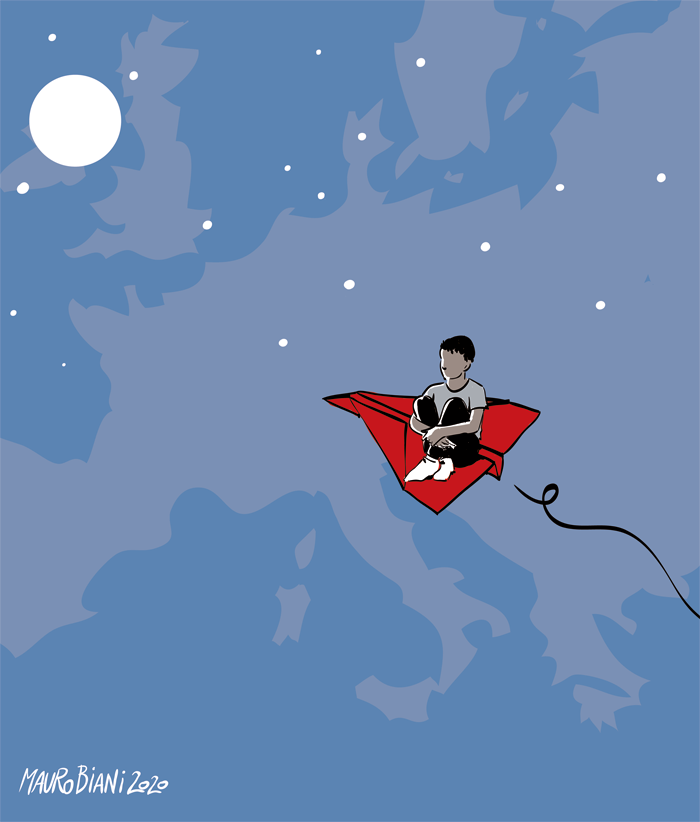 It would be nice to imagine him just like Mauro Biani did in today’s edition of la Repubblica: in flight on a paper airplane as he looks out on the continent of his dreams with pride and enthusiasm. We Europeans don’t seem to appreciate how lucky we are, and this is not just minor disregard, but a crime against humanity. Above all, it’s a crime against boys like Laurent Barthélmy Ani Guibahi. He is the fourteen-year-old from the Ivory Coast who tried to get to France hidden inside the undercarriage of an airplane not knowing, unfortunately, that at -50° and in the thin air at high altitudes, you can’t breathe and you die. In fact, he froze to death and his death will be mourned. We mourn his death like we mourned the deaths of Yaguine Koïta and Fodé Tounkara in 1999; two youths from Guinea who were the same age as Laurent trying to reach Brussels in the same way, even though they took some precautions knowing that temperatures would be freezing at high altitude.

Sure, you can blame naivety. Sure, it’s a crazy gesture any parent would stop, knowing that it is a fatal act of madness. Think whatever you like, but what’s the point of pointing fingers and making judgements about a boy who, just like Yaguine and Fodé, dreamt of a better future with us?

What escapes us Westerners, because we’ve always lived in comfort, in democratic societies and with a myriad of rights that don’t even exist in the collective imagination elsewhere, is that we were fortunate enough to be born on the right side of the world. The duty to share a part of this wellbeing with those less fortunate, who aren’t coming here to take away our rights and jobs but to provide their families with a better future, just like we Italians did at the beginning of the last century when we went looking for hope overseas, escapes us as well.

It would be nice if a school were named after Laurent, if every capital city in Europe placed a Stolperstein with his name on it, if his story were told in every classroom, if our children, starting from elementary school, were to learn about what is happening in Africa and why they often have a classmate named Mohammed with different colored skin than theirs.

It would be nice if contemporary migratory routes were included in school curriculums, obviously linking them to those of the past. It would perhaps prompt our children to realize that if we are still at the center of global news, notwithstanding the indifference on which we are dramatically bordering, it’s because we had personalities like Marco Polo and Cristoforo Colombo in past centuries.

But, above all, it would be nice if everyone everywhere read the letter Yaguine and Fodé wrote to Europe before getting on the plane,

We have the honorable pleasure and the great confidence in you to write this letter to speak to you about the objective of our journey and the suffering of us, the children and young people of Africa.

But first of all, we present to you life’s most delicious, charming and respected greetings. To this effect, be our support and our assistance. You are for us, in Africa, those to whom it is necessary to request relief. We implore you, for the love of your continent, for the feeling that you have towards your people and especially for the affinity and love that you have for your children whom you love for a lifetime. Furthermore, for the love and meekness of our creator God the omnipotent one who gave you all the good experiences, wealth and ability to well construct and well organize your continent to become the most beautiful one and most admirable among the others.

Messrs. members and officials of Europe, we call out for your solidarity and your kindness for the relief of Africa. Do help us, we suffer enormously in Africa, we have problems and some shortcomings regarding the rights of the child.

In terms of problems, we have war, disease, malnutrition, etc. As for the rights of the child in Africa, and especially in Guinea, we have too many schools but a great lack of education and training. Only in the private schools can one have a good education and good training, but it takes a great sum of money. Now, our parents are poor and it is necessary for them to feed us. Furthermore, we have no sports schools where we could practice soccer, basketball or tennis.

This is the reason, we, African children and youth, ask you to create a big efficient organization for Africa to allow us to progress.

Therefore, if you see that we have sacrificed ourselves and risked our lives, this is because we suffer too much in Africa and that we need you to fight against poverty and to put an end to the war in Africa. Nevertheless, we want to learn, and we ask you to help us in Africa learn to be like you.

Finally, we appeal to you to excuse us very, very much for daring to write this letter to you, the great personages to whom we owe much respect. And do not forget it is to you whom we must lament about the weakness of our abilities in Africa.

This should be enough to quash the racism that is slithering everywhere.

Distinguished Minister Azzolina, issue a communication for the inclusion of the letter in all schools. This, more than anything else, was what Yaguine, Fodé and Laurent dreamt of.