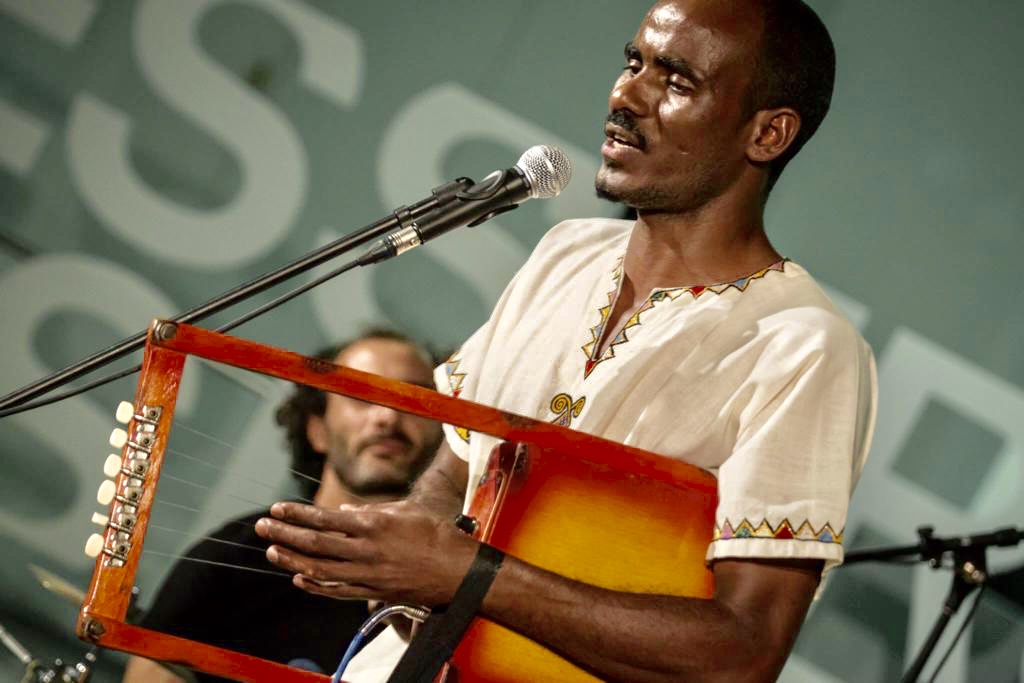 His eyes are like pearls. They see, they run, they chase, they remember, they cry for lives and smile at life. They are intensely bright white and dark black at the center. Pearls. Rare and solitary when they sip from the beautifully sublime, joyful, free, verdant Eritrea and the Eritrea that betrayed, suffocated, repressed and imprisoned. An Eritrea that he carries in his pockets, his hands, his eyes and his heart.

He is just under six feet tall. Forty-years old. Through vivid memories, he welcomes and embraces the shores and countries he touched in flight. He gazes at things he doesn’t know while drinking coffee, swallowing sips of hard-fought freedom. His freedom is never complete, never real in his errant daily search for something he doesn’t know, something that doesn’t exist, something he feels he should have and continues to seek it. He is something of a fugitive, a refugee, a wanderer of foreign lands, a migrant in friendly lands, lands that are never “my land, my home”.

Mihretu is here and there. A versatile artist, a sophisticated intellectual and a poet. The music of life is in his pearly eyes that see what’s not visible and don’t see what’s visible, and never stop dreaming, living, loving and believing in a free Africa.

With heart in hand, he breathes sweetly over the crib of the daughter he left in Eritrea with her mother. He escapes to other lands. He moves further and takes with him the scents of home that still linger in his nose.

He pays in dollars, one thousand two hundred, like the others on the boat, and then the difficult journey through the desert. One week on foot. Broken and bleeding. Cracked lips, parched throat, dry stretched skin and his stomach tight from emptiness.

The boat pitches and there is fear, anxiety and thoughts. Cruel Libyans use riding crops to lash, mark and wound. Mihretu is in Libyan hell suffering when he presents papers to “call for” his young Eritrean wife and daughter to go with him to Europe.

Mihretu hurts down to the bone, but his will to live is even stronger. He takes a risk, overcomes hurdles and goes towards the unknown, headed for freedom. He is on a boat with death next to it, in front of it, below deck and under the sea. Dozens of fellow companions die of hunger, thirst, seasickness, fall overboard because of the waves, and are hurled into the sea by men to make room. They are hidden under live bodies…  and the mother, who is holding her cold child in her arms, washing her with the warmth of her tears, heating her with her breathing and sobs, is begging to keep her close to her heart until they reach land, if they reach land, so that she can cover her child with bitter earth.

Macbel was three years old. Mihretu doesn’t want to talk about that voyage. He swallows up time but the tiny body held tightly to his mother’s heart is there and lives with him.

He lands in Lampedusa after ten days at sea. He travels around Italy. Half of Europe sends him back to Italy. He is not homesick and doesn’t feel what others call heartbreaking… but he says, “I don’t feel at home. I have to be careful all the time.”

He works and falls in love with Sara at the ARCI- Associazione Ricreativa Culturale Italiana, helping the needy and those who don’t have a voice. They work together at the landing port in Salerno, where they receive, mediate, sort, translate and treat. It’s love at first sight and its strong. The year is 2009. Sara Bruno and Mihretu Ghide get married in 2015. In January 2018, they have a daughter, Lisa.

The dance of the faces sways, hidden, below, and resurfaces in the regurgitations of the experience of migration. Mihretu is here in Crotone with Sara and Lisa, who is only a few months old, already a princess at birth. Mihretu is there. In Switzerland every year with Ferusa, his 18-year-old daughter. A modern family that cares and doesn’t betray. It loves, is close and united. His brothers and sisters live in Africa. In the south. He won’t say where. His parents and eldest sister live in Eritrea where Mihretu can never return. For now. A few years ago, homesickness took him to Ethiopia where he saw friends, classmates and siblings again. He feels anger for the Eritrea of today and has fond memories of his life there from 1993 to 2000. “I’m happy here with my Italian family,” he says. “But I miss something I can’t quite put my finger on very much. I don’t feel free.”

Mihretu, a long-term resident now, opposed the regime. He and his father showed nerve, strength and courage in their military greens. The regime went after them. He paid highly for his choice, and so did his brothers. So he ran away. He fled from Eritrea. To South Sudan, the desert, Libya. Lampedusa in 2006 and the SPRAR (System of Protection for Refugees and Asylum Seekers) reception center in Salerno in 2008. He met Sara and asked her to help his ex-wife and their young daughter, Ferusa, get out of that hell. They go by plane. A brief stopover in Salerno and then Switzerland.

Mihretu is here and there. He carries his Eritrea in his pocket, in his hands, in his eyes. He loves the simplicity of people and mixed meat in his spicy zigni sauce, the dish everyone ate together over there.

Political refugee, poet, he plays the krar, a traditional stringed instrument in East Africa, and sings in the Tigrinya language, the language spoken in Eritrea. He has been playing African music for ten years along with two musicians from Salerno. The name of the band is Mihretu Ghide e Panacea. They play songs about Africa with a view from here. They sing about Africa without borders. And in the autobiographical song called “Zemen”, Mihretu sings about the horrible thirty-six hours spent at sea.  He survived miraculously while his best friend died right beside him.

This is how Mihretu lives. A little here and a little there. He sings about Africa with death in his heart. He translates at police headquarters. He helps his fellow countrymen in need. He loves his wife, Sara, who works in Crotone. He helps his daughter in Switzerland, his siblings in South Africa and sings African-Italian lullabies to Lisa.

And he always carries Eritrea in his pockets, his hands, his eyes and his voice. He is a dreamer who will never give up.