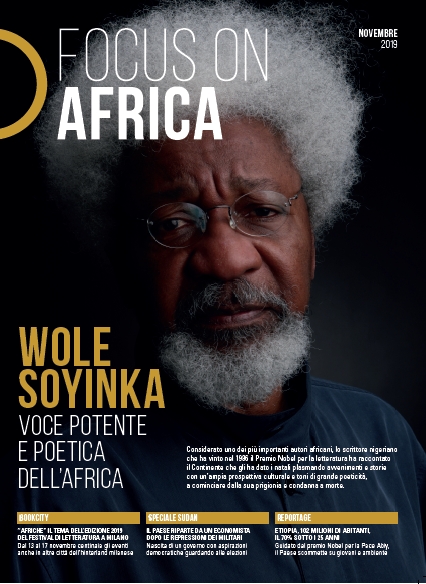 Over 3,000 writers in more than 1,500 free events; 1,400 school children from all grades; 400 volunteers and 250 locations throughout Milan; universities, theaters, and even hospitals, prisons and private homes. These are the figures for BookCity the book festival in Milan that has reached its 8th year and was even more widespread and engaging. It ended yesterday with the first African to receive Nobel Prize for Literature, Wolw Soyinka at the closing event that was held at the Triennale. Focus on Africa was one of the media partners with a special print edition.

Numerous African writers participated at dozens of events including Soyinka to whom we dedicated the cover of our magazine. At one of the BookCity events, the writer from Nigeria spoke with anthropologist Marco Aime on the delicate subject of the relationship between power and freedom. An important moment because he is the greatest living African writer.

“Today, humanity faces the same enemy freedom has had ever since man gathered in a society. The enemy is called Power. That is why today, the greatest threat we must face is political arrogance and the religious fanaticism, carriers of repression and intellectual closure and thought.” Said Soyinka who was incarcerated, persecuted and sentenced to death during the civil war in Nigeria.

His works are a perfect guide for reflection, all the more necessary and current today, on how to oppose fundamentalist and dogmatic behavior and to fight the “domination agenda”.

Imprisoned in Nigeria in the 1960s due to his political commitment , he received the Nobel Prize for Literature in 1986. Jaca Book began publishing his works in Italy in the 1970s, including The Interpreters, Death and the King’s Horsemen, The Road and  The Man Died: Prison Notes. A new collection of essays on power and freedom will be published in November. Soyinka uses words of concrete hope: freedom is humanity’s true home and humanity can build it both in wealthy countries and in conditions of poverty where there is no destitution and slavery.

The freedom of a life of poverty and dignity doesn’t seem to exist on our planet.  The populist chimeras use racism as a persuasive influence over populations in the northern hemisphere,  imposing new forms of slavery and locking those who propagate it in a cage of ideological slavery. Theater, literature and the arts are called on to create pieces of the real world. Symbolic gestures, like a ship that returns to Africa from Palermo carrying art and culture, and represent steps in the direction of cultural education and conversion. In his perfect balance of history, Soyinka presents a capacity for international political judgement that statesmen seem to lack.

Many other events were developed around the key theme of the 2019 edition; different points of view, stories and accounts.

BookCity is sponsored by the Department of Culture for the City of Milan and the BookCity Milano association that includes Fondazione Corriere della Sera, Fondazione Giangiacomo Feltrinelli, Fondazione Umberto e Elisabetta Mauri, and the Fondazione Arnoldo e Alberto Mondadori.

“Milan,” President Marchetti said, “has the suitable fabric; culturally and intellectually permeable for our initiative. And we are ready to help other cities so that they can replicate our model.”

Among the events was the one curated by our publication for the presentation of the book, L’innocenza spezzata (Interrupted Innocence) written by our Editor in Chief, Antonella Napoli who was be joined by

Luciano Gualzetti, Director of Caritas Ambrosiana, and Rossella Miccio, President of Emergency to discuss and analyze the forgotten crises and emergencies in Africa.