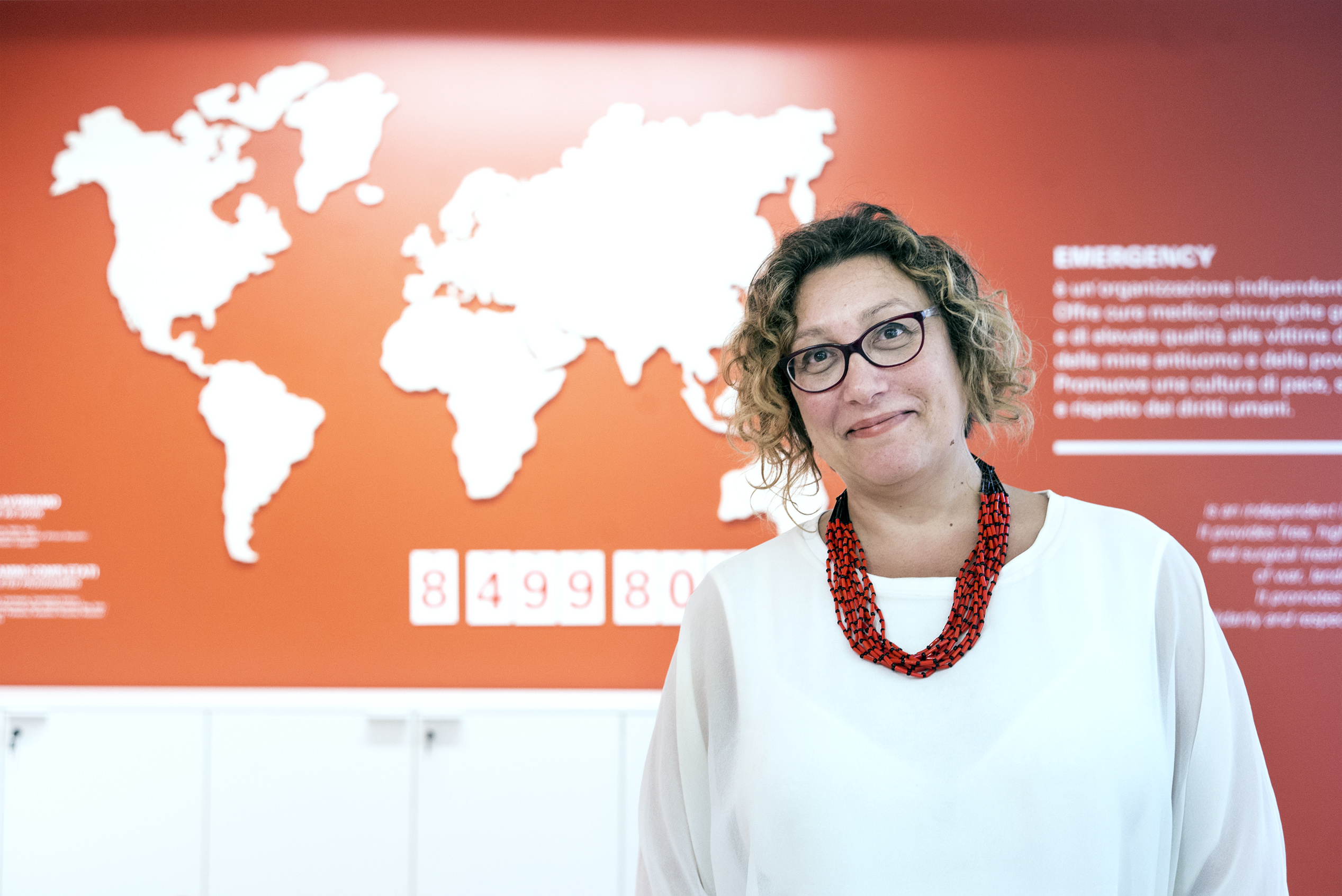 Twenty-five years ago, a visionary with hearts as big as Gino Strada’s and his wife Teresa’s, created an organization with the purpose of providing assistance and healthcare where neither were guaranteed.  It was a small organization then, almost artisanal, recalls its current President Rossella Miccio, both in how it operated and the budget available, which were much inferior than today.

Many things have changed since then. Throughout the years, Emergency has grown. In terms of knowing how much there was and is to be done, it has developed extensively and has treated millions of people in 18 countries all over the world.

“But what hasn’t changed is the spirit and the approach: always put the patients and their rights first, have the idea of concrete equality as a reference without ever compromising the quality of our work despite the fact that conditions are becoming more difficult.”

“Today, working in a country at war is more complicated than it was fifteen-twenty years ago,” says the President in an exclusive interview with Focus on Africa. “We notice that more often than not there is little respect for humanitarian work, and guaranteeing the same treatment and the same quality requires a great deal of effort. Without doubt, the budget has risen as well so the structure has had to reorganize in order to meet these rising needs. But it never lost its soul, our spirit. I think this is what makes the difference in the work we do both abroad and in Italy. Treating 10 million people in 18 countries is a big responsibility that urges us to keep working, every day, more intensely and incisively, especially in what Emergency calls ‘promoting a culture of peace’. The experiences these 10 million people have gone through gives us the strength and also the authority to demand change. And that’s what we continue to do.”

After two years of your presidency, what’s the first assessment?
“Even though I’ve been with Emergency for 19 years, being President has been and still is a major challenge. At the beginning, it was particularly complex because it coincided with a period in which the role of NGOs was being called into question and criticized by public opinion, so we suddenly had to confront everyone in a context we weren’t used to. It wasn’t easy but, seeing how things have worked out in the past two years, I’m very happy with the results and future prospects. This is true of the organization, that is decidedly growing in many areas in Italy, and in terms of the current role Emergency plays abroad as a point of reference on the humanitarian and cultural front. In fact, Emergency isn’t simply an NGO, it’s a very important reference of values in Italy. We observe this from the feedback we get from people who contact us and people we meet in a wide range of contexts in Italy and abroad.”

Gino Strada has always been the face of Emergency. Is it difficult to co-exist with such an extraordinary yet large personality?
“I’ve had the great privilege of working with Dr. Gino ever since I started working with Emergency on a two-month internship and from the start, I was involved in the activities in setting up the hospital in Kabul, working closely with him. He was, and still is, a great teacher and an important point of reference to whom I owe a lot. I tried to “absorb” everything he taught like a sponge. He is definitely a person with a strong character, demanding and at times even difficult. Despite a few clashes we’ve had, I have always had a constructive relationship with him and I can express myself in a transparent and serene manner. I express my doubts, worries, and concerns without ever feeling at fault or embarrassed. I think he gave a lot and still has a lot to give to Emergency and not only. He is important for all of us working in the association and I think even more so for people who follow Emergency from the outside.”

Emergency has been active for 25 years. Which year was the most difficult?
“We face difficult moments all the time. Personally, one of the most critical years was 2010 when three Italian aid workers  –  the coordinator of the project, the medical coordinator, and the coordinator of the hospital in Lashkar-Gah – were arrested by the secret service in Afghanistan under the false accusation of plotting to assassinate the governor of the Lashkar-Gah district. It was a nightmare. It made no sense at all. It was probably a preventative action to silence us as direct witnesses so they could launch a military attack in those regions. As soon as we got the news, I left for Afghanistan immediately: we had to interrupt our activities in the area because our points of reference were vanishing. We had been working in Afghanistan since 1999, we had been there 11 years. It was very complicated. At the time, we also felt very much alone because we didn’t receive, except marginally, any support from the Italian government. But at the same time, in addition to knowing  for certain we were innocent, we received enormous support from ordinary people who gave us the drive not to give up and keep going. A few days later, we organized a demonstration in Rome, in Piazza San Giovanni. There were 50,00 people shouting, “I’m with Emergency.” The biggest fear was that all the work we had done in Afghanistan could go up in smoke. Soon after, our workers were freed without any charges made against them and in time we rebuilt a relationship with the local authorities  and started up our activities in Lashkar-Gah again. Today we can say without question that Emergency has been an important factor in the recent history of the country and is appreciated and recognized by everyone.”

What are and in what phase are the projects in progress?
“Next spring, we are inaugurating the new Centre of Excellence in Pediatric Surgery that we began constructing in February 2017 in Entebbe on the shore of Lake Victoria in Uganda. The design of the hospital was developed pro bono by the Renzo Piano Building Workshop in collaboration with TAM associates and the Emergency technical department. It respects environmental sustainability: the structure is made of bricks of rammed earth, a traditional technique that uses natural earth for the thermal mass necessary to keep temperatures and the humidity steady. Furthermore, the structure will have 2,600 photovoltaic solar panels to meet energy needs. In addition to providing excellence in surgery, the hospital will also serve as a training center for young doctors and nurses from Uganda and the surrounding countries because one of our main objectives is to contribute to the growth of local healthcare workers with a view to long-term, sustainability in the country. Currently, we are working on the opening of a hospital in Yemen, a country that has been in a critical situation since 2011. Since the war escalated in recent months, there is an even greater need to provide medical treatment for the population, devastated by hunger, lack of clean water, medicine and basic necessities. Two out of three people don’t have access to primary healthcare, and over 14 million Yemenites live on the verge of poverty. We have already been recognized as an NGO in Yemen and this is the important first step to work in any country. However, it is very difficult to continue in the current situation. Our staff has carried out many missions and we are hoping for a breakthrough within the next few weeks so that we can proceed with the project”.

The health system in Italy in general is getting worse. What is Emergency’s commitment to it?
“We began the Programma Italia in 2006 because we are aware that the right to healthcare, upheld by our constitution, in practice often disregards many categories of people, such as migrants, foreigners and the poor. Moving within our National Health System, which is very complex from a bureaucratic point of view, isn’t easy for anyone who has difficulties with the language, various physical or psychological problems,  and little knowledge of their rights. Every day, our structures, located in many Italian cities from the north to the south, deal with migrants who have just arrived, foreigners who have been residents in Italy for some time, and even Italians on the verge of poverty and social exclusion because they were victims of the economic crisis and had no escape. Our stationary and mobile clinics and our socio-medical orientation desks provide assistance for everyone. Until late 2018, we even worked in various Sicilian ports, like Augusta and Pozzallo, and in temporary reception centers in East Sicily to provide initial treatment to migrants in the delicate moments of landing and the beginning of their journey in Italy. For the past few weeks, given the situation in the Mediterranean which has worsened drastically following the agreement with Libya and the instability of that country, we began a very positive collaboration with Open Arms and sent some of our staff – psychologists and mediators – on board the vessel. We are intensifying our commitment here, too.”