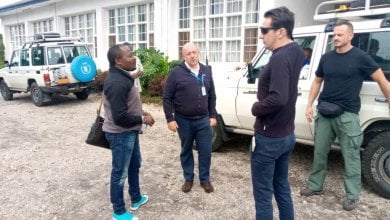 We still don’t have all the elements needed to understand with certainty what happened this morning on the road that goes through the Vitinga National park to reach Goma, but one thing is certain; the members of the convoy, seven people including Italian Ambassador, Luca Attanasio, and Italian Military Police Officer, Vittorio Iacovacci, were taken into the forest by assailants who spoke Kinyarwanda before being killed by them during a shoot out with park rangers patrolling the area with the help of Congolese armed forces.

News reconstructing the attack that are filtering out from the DRC Foreign Ministry, lead to a planned kidnapping to demand a ransom.

According to our sources, it is well-known that dangerous Rwandan armed groups operate in the area around Virunga that have repeatedly attacked civilian and military convoys.

A Congolese security forces officer, who wished to remain anonymous, said that the attacks in the area are organized and are never happen by accident.

Sometimes the attacks are ambushes aimed at kidnapping in order to demand a ransom, other times they are commissioned actions, or they are committed to get rid of rival groups.

The mystery that local security forces had not been informed of the ambassador’s presence in the delegation’s convoy remains.
The local police chief confirmed he had no knowledge of the Italian diplomat’s plans to travel in the area and even slipped in a polemic comment: travelling in such a dangerous area without notifying local security forces has raised many questions and surprises.

In short, it is not clear who is responsible and what happened exactly.
In order to shed light on the tragic event, the Italian Foreign ministry ask the UN for a detailed report of all the phases of the operation the ambassador was involved in and a thorough investigation of any omissions or shortcomings of the local authorities.

He offended the Prophet Muhammed in his posts and deserves three years detainment. This is…

A staff of 385, 179 of which are healthcare workers. About 80% are local professionals and…