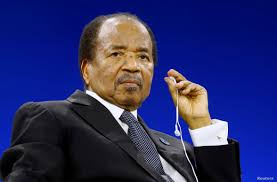 On 6 November 1982, following the resignation of President Ahidjo, Paul Biya rose to the highest office. In his first months as President, thanks to his promises of democracy and clemency for political prisoners, his popularity was huge, especially amongst youths. Then in 1984, the presidential guard attempted a coup. From that moment on, Biya began to become more authoritarian and ruthless. Repression was merciless: hundreds of people were killed, especially in the north of Cameroon. Former President Ahidjo, considered an accomplice to the putschists, was sentenced to death in absentia.

Since 1960, the year of independence, all the power in Cameroon has been in the hands of the President who is also leader of the only party, the Rassemblement du Peuple Camerounais (RDPC). In addition to being an extreme centralizer, Paul Biya is also a “deadbeat king”: he doesn’t work much but he travels a lot abroad accompanied by a “court” of ministers and assistants, especially to Switzerland, where he stays at one of the most luxurious hotels in Geneva at the expense of the Cameroonian people. The Council of Ministers meets only 3-4 times a year and so decisions are made very slowly. This way of governing has led the country to ruin: in 1980 Cameroon was the fourth largest producer of cocoa, had a very high growth rate (13% in 1981) and was considered a middle-income country. Since 1986 it has become a country with many poor people, terrible infrastructures and a very high rate of corruption. In 1988, Transparency International rated Cameroon as the most corrupt country in the world. The streets are in terrible conditions: few of the main roadways have been asphalted and most of the streets are just dirt roads. On 27 January 2021, 54 people were killed and many others were injured in a serious road accident in western Cameroon.

At the beginning of the 1990s, poverty and authoritarianism drove the population to rebel. They began to strike and cause civil disobedience, the so-called opération villes mortes. As a result of popular pressure, in 1992 Biya pretended to open up to a multi-party system and called for presidential elections. The official results saw the outgoing president victorious with 40% of the vote against the 36% of the main candidate of the opposition. Election fraud was evident and the opposition protested in vain. In 1997, the opposition boycotted the elections and Biya got 92.6% of the votes. The Cameroonian dictator was elected again in 2004 with 70.9% of the vote.
Opening up to a multi-party system was only for appearances sake. In reality, Biya created hundreds of small parties, that he secretly controlled, with the aim of weakening the opposition. Freedom of press is practically inexistent: public television is controlled with an iron fist by the president’s men and the few existing newspapers are often censored if they dare attack the government. The judiciary is not an independent body because judges are nominated directly by the president, and political opposers are persecuted or arrested.

In 2007, Biya announced his plan to revise the constitution where the biggest change was eliminating the limit of two presidential mandates. In February 2008, a popular revolt erupted against this plan: repression was brutal. Hundreds of protesters were killed and thousands were arrested. In 2008, the constitutional revision was voted on by the National Assembly and in 2011, Biya was reelected with 78% of the vote. The American Ambassador to Cameroon, Robert Jackson, reported many irregularities but the Supreme Court rejected the claims lodged by the opposition and confirmed the dictator’s victory. By then it was clear that Paul Biya would be “President for life”.

In July 2018, despite his 85 years, Biya announced his intention to run for the October 7 election. The opposition chose Maurice Kamto, born in 1954 in Bafoussam, to run against him. In October, Biya was proclaimed the winner with 71.28% of the vote but Kamto contested the results and proved, thanks to his team of lawyers, that the elections had been rigged. In response, on 26 January 2019, the leader of the opposition was arrested along with about 200 activists from his party. He was detained for several months until 5 October 2019. In September 2020, Maurice Kamto was put in house arrest. His home is under surveillance by uniformed men armed to the hilt and no one can exit or enter.

In 2020 the conflict between the separatists of Ambazonia, an Anglophone region that self-declared independance in 2017, and the Cameroonian government led to civil war. Over 3,000 people were killed and 70,000 people fled their land. According to Abongwa Hariscine Keng, Vice President of Ambazonia who lives in exile in Italy, a veritable genocide took place with the deaths of almost 15,000 people. One of the most serious events occured on 14 October 2020 in an elementary school. In the city of Kumbà, eight children were killed by armed men in civilian clothes. The situation was of such concern that Pope Francis sent Cardinal Parolin to Cameroon on a reconciliation mission. The Vatican Secretary of State was in Cameroon for six days, from January 29 to February 3 2021.

In conclusion, it is unacceptable that a president stay in power for 38 years. Without political alternatives, there is no democracy or respect for human rights. France has a great political and moral responsibility because for the past 38 years, all French presidents have unconditionally supported the dictator, Biya, one of the most corrupt men in the world.