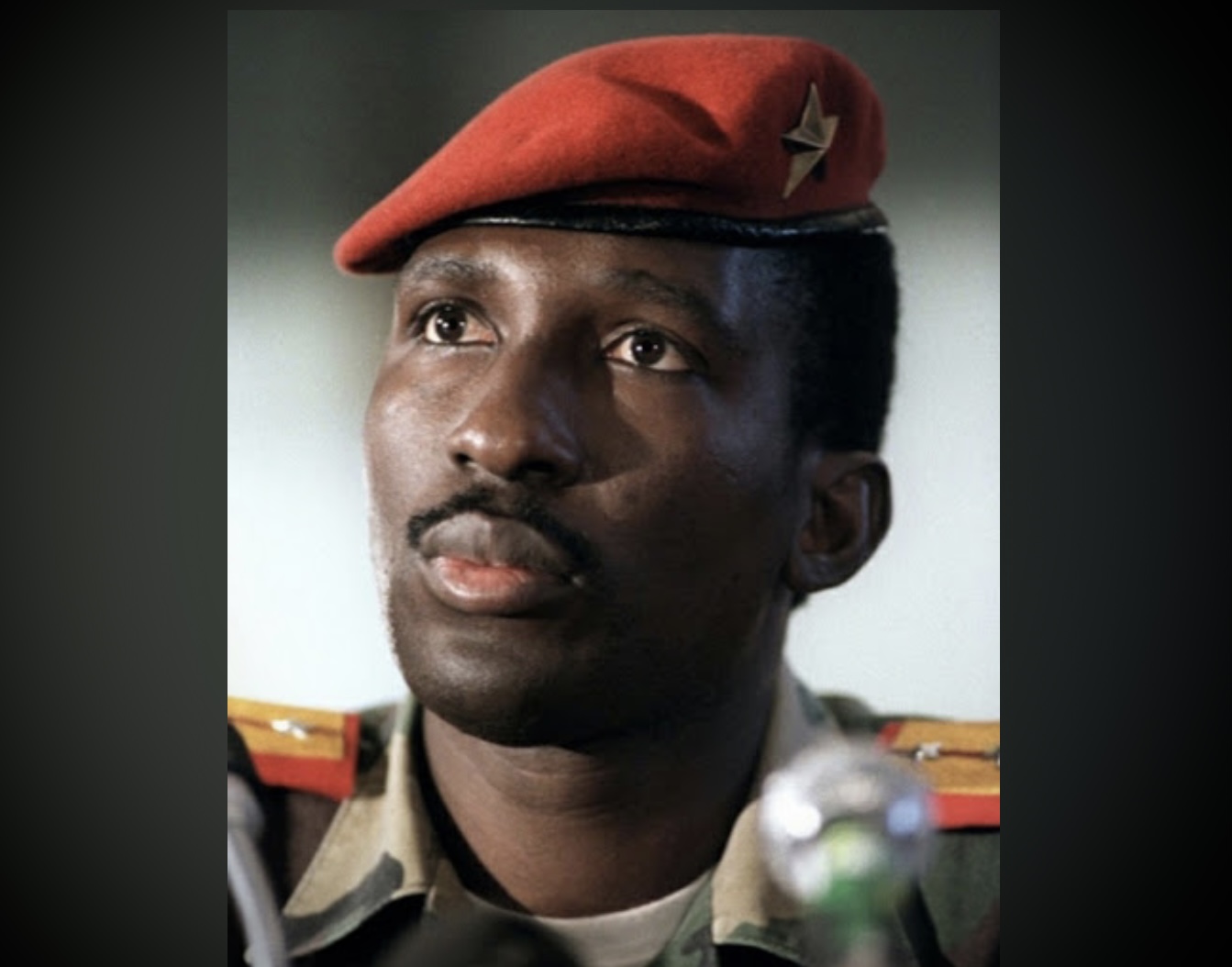 It’s with these words that I want to tell you the story about a great hero and figure from the last century, Thomas Sankara, the African Che Guevara. A man who is not well known but who deserves the same importance and attention as many other past heroes.

This story begins in Burkina Faso (previously Republic of the Upper Volta), a “fourth-world” country; arid, landlocked and devoid of natural and economic resources, but that boasts the birth of Commander Sankara, a different kind of soldier, atypical, who didn’t just give orders to his men, he also listened and tried to understand them. At the age of 27, in 1976, Sankara, along with another young officer, Blaise Compaoré, founded the “Communist Officers’ Group” and a few years later, in 1983, they overturned the then ruling Ouèdraogo government in a coup d’état without shedding blood.

After the coup, Sankara officially became President of Upper Volta. With great commitment and determination, Sankara, along with his trusted friend, Blaise Compaoré who became Vice President, began a project to restructure the state taking inspiration from libertarian and communist examples. The name of the country was then changed from Upper Volta to Burkina Faso meaning “the land of the upright people”. Using his talents as a musician, he also rewrote the national anthem called, “Une Seule Nuit”, Only One Night.

In four years of government, Sankara was finally able to give dignity to the country instituting great reforms and innovations, but above all, by launching a battle against the corruption that had been going on for far too long.

Sankara rejected wealth, he lived on the brink of poverty, he got around by bicycle, he even imposed the same lifestyle on his ministers. The goal was to live each day like any other inhabitant in Burkina Faso.

Thomas Sankara was also strongly committed to ensuring equality for men and women. Sankara began a type of integration and safeguarding program for former prostitutes to encourage them to enter the workforce, and he urged the people of Burkina Faso to use condoms against AIDS. In addition, Thomas Sankara abolished the tribal practice of female genital mutilation and polygamy. He then launched a mass vaccination program and to fight desertification of the Sahel, he planted a million trees in the area. To promote small businesses and render Burkina Faso more autonomous and independent, Sankara used the army which led to a significant reduction in prices allowing the entire population to purchase basic goods.

Under Sankara, the people became an integral part of the country’s life in both little and big everyday things. Sankara’s revolution was primarily based on sharing and equality for all and the main message was to make the western world understand that they were no longer devoted servants, but people who were free to choose their own destinies. At that time, Thomas Sankara strongly condemned western countries’ support for the white president of South Africa, Pieter Willem Botha, a staunch promoter of apartheid, and it was because of these anti-imperialist ideas that the President of Burkina Faso was continuously attacked. One such incident was the thwarted attempt to overthrow him in a coup in 1984.

On 29 July 1987, Sankara gave a famous speech at the Organization of African Unity on the alleged debts of African countries to Western countries. He received many accolades for his words, but at the same time they brought on the antipathy of many African leaders associated with the West. Afterwards, Sankara had to be escorted everywhere. There was fear for his safety.

But it wasn’t one of his enemies to end it all, but rather his lifelong friend who in the meantime had become his opponent; Blaise Compaoré. On 15 October 1987, the two of them met. Perhaps because of an argument, Compaoré took the gun from Sankara’s belt and shot him fatally in the chest. Other versions say that Sankara was killed during an ambush of armed men order by his former friend. Some claim that it was an accident. On his death certificate, the cause of death is by natural causes and Sankara’s body was buried in pieces in an unmarked grave near Ouagadougou. But it doesn’t end there. In the meantime, Blaise Compaoré rose to power and tried to erase Sankara’s legacy from the people’s memory in every possible way and went as far as prohibiting everyone from pronouncing his name in public. He even proclaimed the date of the former president’s death as a national holiday. Furthermore, in 2007, on the 20th anniversary of Sankara’s death, fearing protests, Blaise Compaoré distributed gifts and money to the population in order to stop people from going to the Dagnoen cemetery where some of the remains of Sankara are presumably buried. But people still went to visit their leader. Because of this, after the anniversary, Compaoré’s men damaged the grave which was later reconstructed.

After years of tyranny, a popular uprising in 2014 ended Blaise Compaoré’s unscrupulous dictatorship, and drove him away permanently.

So finally, on the walls of houses, on signs and from people’s mouths, the name and figure of Thomas Sankara came to life again. The African Che Guevara will never die.