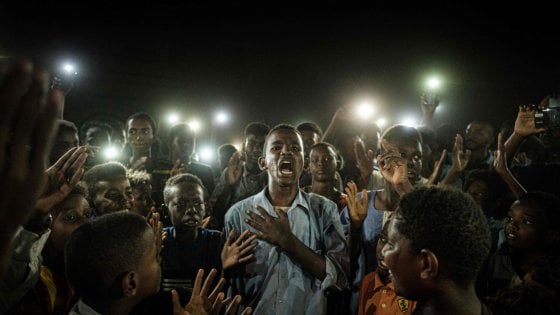 The most moving image of the Resistance! A young man reads a poem surrounded by protesters and illuminated by his peers’ mobile phones. The shot was taken by Japanese photographer, Yasuyoshi Chiba for France Presse and its powerful message earned it the World Press Photo of the Year 2020. The image of a young man was immortalised as he recites poetry amidst protesters calling for civilian rule in Khartoum, Sudan, after a military coup ousted Omar al-Bashir and ended his 30-year rule.

During the peaceful protest, in June 2019, many youths were killed: blood on innocent middle school students’ bookbags!! Yet the boy, in the face of danger and death, recites poetry! A gesture that goes well beyond courage, beauty and emotion!

This was the focus of “Sudan: Children in the Trenches” with journalists/eye-witnesses Abdelaziz Yakub (Sudan) and Jok Madut Jok (South Sudan) that opened the latest edition of “Imbavagliati, Festival Internazionale Giornalismo Civile” in September 2019, which I created and curated.

During the meeting, moderated by Ottavio Ragone, Editor in Chief of La Repubblica in Naples, Antonella Napoli, journalist, writer, international affairs analyst and Editor in Chief of Focus on Africa whom had just returned from Sudan, gave us a glimpse of the prospects for the democratic process that has just begun, the unresolved conflicts and the issue of child soldiers. Enzo Nucci, RAI correspondent for Sub-Saharan Africa, spoke about the difficult path towards peace in South Sudan that include the numerous agreements and the problems facing international forces in cutting out a political role for themselves. Father Daniele Moschetti, Director of the Comboni Mission in South Sudan, talked about the complex humanitarian situation in a country in profound crisis. The poetic illustrations drawn “live” by Fabio Magnasciutti were spine-tingling.

From Syria to Afghanistan, crossing through Libya, Spain and Morocco, the fifth edition of the festival against gags turned the spotlights on the “Wars of the Innocent” in countries where minors live in situations of war and poverty and on which the threat of death and exile looms ominously.