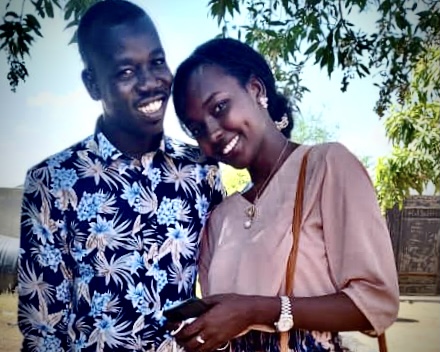 Eshan Ahmed Abdallah and Deng Anei Awen are in their early twenties. She is a Muslim from Omdurman, Sudan. He is a Christian from Aweil, South Sudan. They met and fell in love in 2018.

A year ago, after fleeing the country where Eshan’s family lived, who was against their union, they got married with the Muslim rite hoping they would not incur retaliation from her parents.

Eshan is pregnant with their first child and they live with a death threat hanging over their young lives.

“We had to get married with the Islamic rite because we were frightened. But because I’m Christian, the archdioceses of Juba issued a regular marriage certificate. Now our life is at risk because of this,” Deng tells us over the telephone, making an appeal to Pope Francis.

“The Lord has given you to us and in the name of the Lord I hope you can save our lives from Islamic groups that want to kill us,” are his heartfelt words addressed to the Holy Father.

“Don’t think that by escaping, even if you reach South Sudan, you are safe. I will catch up to you. I swear on Allah that wherever you are, I will come and cut you into pieces. If you don’t change your mind and return, I will come to you and I will kill you,” said Ahmed Adam Abdullah, the young Sudanese girl’s father, threatening her through a video published on his Facebook profile.

The young couple know they are not safe in Juba where they sought the South Sudanese government’s help. An appeal which had negative results: The Minister of Justice responded he could not help them.

The local Muslim Council, to which Eshan’s family appealed saying, at first, that she had been abducted, condemned the marriage, deeming it null and void, and issued an arrest warrant for the couple.

The young girl herself had published a video on Facebook announcing her marriage to Deng thereby disproving she had been kidnapped and stating she had left Sudan of her own free will and that she freely chose to be with the man who was “right for her”. In the post published on social media, she ended by denouncing the beatings, the deprivation of freedom and the serious psychological pressure she was subjected to when she told her parents about her love for Deng.

But her courageous act of independence and claiming her rights cost her dearly.

Her post, like the photos published by her husband, in which she appears without a hijab, were shared on Sudanese social media and created a hate campaign against them.

The conservative Sudanese society, still conditioned under the law of Sharia, is extremely strict with regard to mixed marriages although when a man asks to marry a woman of a different religion other than Muslim, the problem does not exist.

Eshan knew that marrying a man from South Sudan, moreover Christian, without her family’s approval would have upset their archaic mentality, but she thought that they would accept it in time.

She never expected her parents to issue a fatwa against her and her husband, a religious opinion with origins in the sacred text of the Koran and in Islamic tradition which often turns into a death sentence.

“We’re frightened. My wife and I are very scared and that’s why we are asking to be taken out of here. We aren’t safe here,” says Deng Anei Awen, fearful for his wife’s condition, with only days left until she gives birth.

After receiving public death threats from the father of the bride, the couple asked the intervention of South Sudanese authorities  stressing how the opposition to their marriage was, in addition to religion, founded on tribal racism against Deng. They hoped that by denouncing the violation of rights perpetrated by Eshan’s family they would receive protection.

But their expectations clashed with the interests of a government that avoids disputes over low-profile cases with the neighboring country from which South Sudan separated in 2011 with a referendum of independence after a twenty-year war.

“We are in constant danger. My family can send anyone at any moment to kill me and my husband,” the young woman in her ninth month of pregnancy cries out. “We know the African borders are open and they can arrive at Juba easily. We have asked various human rights organizations for support and to intervene to get us to any country willing to give us asylum for our safety but no one has been able to help us yet,” she concludes bitterly.

The story of  Eshan and Deng has sparked a lively debate on social media in both countries of origin of the protagonists. In Sudan, the Sharia precept applies in which a Muslim woman cannot marry a man who belongs to another religion or does not believe, under penalty of annulment unless the man is willing to sign a declaration of Islamic faith. Both Sudan and South Sudan are conservative patriarchal societies where decisions regarding daughters are mainly made by the father.

In a couple of videos on Facebook, Eshan recites the verses of the Koran on the obedience due by “believers” to their parents, stressing the rule under which a young woman cannot marry a man without the blessing of her “guardian”. Consequences can be lethal to those transgressing the precepts of Islamic law.  Such as the case of Meriam Ibrahim, the daughter of a Sudanese Muslim who was raised in the culture of her Christian mother and condemned to death for apostasy after marrying a Christian from South Sudan. Meriam was freed thanks to an international campaign raised in her defense.

Eshan and Deng hope that their story provokes the same indignation and mobilization.