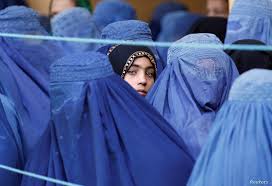 Maryam is a 14-year-old girl from Afghanistan. Her dream is one day being a doctor but it is bound to go unfulfilled. Helping Maryam and many other young women like her to keep hope alive is an immense challenge. Supporting today Women for Afghan Women is bow more important than ever.
WAW was founded in New York in April 2001 in response to the brutal conditions Afghan women and girls were suffering under Taliban rule. After the October 2001 attacks in the United States and the ousting of the Taliban in Afghanistan, the organization evolved from a small network of volunteers assisting 10 Afghan refugee women in New York into an over 700-member team that today serves hundreds of thousands of clients through extensive, direct services and programming in 32 facilities and across 14 provinces in Afghanistan, a community center in New York, and an advocacy office in Washington, DC.

Women for Afghan Women (WAW) is committed to the leadership and agency of Afghan women and girls in the struggle for their rights. Our work is community-based and takes place within the religious and cultural context of the women of Afghanistan. The organization and the breadth of our services are strengthened by our commitment to diversity, with our board and staff including men and women, and a diverse representation of age, religion, ethnicity and sexual orientation.

Over the past 16 years, Women for Afghan Women has become the largest organization for Afghan women and children globally, and the largest women’s organization in Afghanistan. Today, WAW provides life-saving and life-changing advocacy, education, and direct services for women and children across Afghanistan and New York who have endured human rights violations, including forced and underage marriage, attempted “honor” killings, domestic violence, ba’ad (custom of females exchanged in compensation for a crime), rape, forced prostitution, unlawful imprisonment, and barred access to education and employment.

WAW’s services have become an important stopgap in the fight to eradicate gender-based violence against Afghan women and girls. Proudly, today, we are the largest women’s organization in Afghanistan providing mediation, protection, and life-saving services to women, girls, children, and their families.

To ensure our impact propagates, we are constantly evolving, adapting, and improving the scope of our programs to meet the changing needs of Afghan society and communities. Today, our needs-based programs have also expanded to meet the urgent requirements of refugees in the U.S. and Afghanistan, in addition to conflict-induced internally-displaced persons (IDPs) in Afghanistan.

In Afghanistan, Women for Afghan Women (WAW) operates 32 centers and offers services and programs to beneficiaries across 14 provinces providing pro bono mediation, protection, and life-saving services to women, girls, children, and their families. Increasingly, WAW is serving IDPs and the recent influx of refugee returnees, particularly from the European Union, Pakistan, and Iran through its new Protection and Monitoring Project, in addition to WAW’s other longer-standing programs such as Family Guidance, Women’s Protection, and Children’s Support Centers. Our life-saving and life-changing services impact hundreds of thousands of women, children, family members, and Afghan community leaders and public officials each year.

In the United States, WAW’s New York Community Center (NYCC) has become a lifeline and second home to the Afghan immigrant, refugee, and Afghan-American community.

Supported by our advocacy efforts in Washington, D.C, we serve the direct needs of thousands of individuals and families from this under-served population in the United States, each year, by providing culturally sensitive, holistic, and immediate support.

Ethiopia, the Diocese of Adigrat calls for urgent humanitarian corridors for Tigray

The 6 sisters arbitrarily arrested in Addis Ababa on November 30th were released. These are…