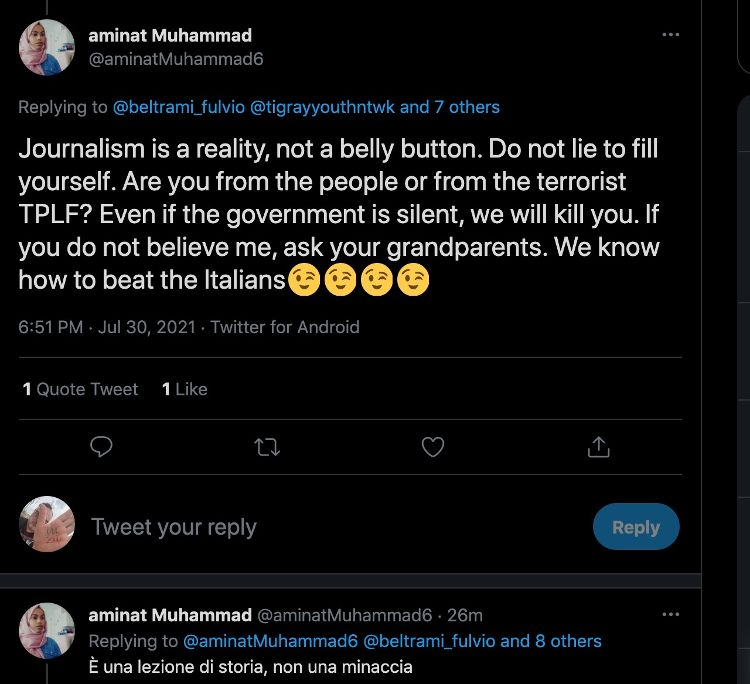 The first casualty of the war is the truth.

In 2018, one of the first political acts made by Abiy Ahmed Ali, elected prime minister, was to decrease the pressure on Media, trying to open spaces in favor of press freedom. I remember as if it were today the joy and the atmosphere of freedom that was breath at the time.

Not only could we foreign journalists work without fear, butordinary people could freely and publicly criticize the government. In 2017, the people I spoke to in Addis Ababa begged me not to discuss political issues. A year later the same people were talking to me aloud about it while we were enjoying a good cup of bunna or savoring a heavenly Abesha beer on tap. Accustomed to prudence, I tried to change the subject by receiving the disappointment of my Ethiopian friends. “Fulvionow there is democracy. Can we talk. It is our right ” they explained to me.

At the time, I signed the articles on Ethiopia under TonioTamene pseudonym. I felt compelled to help strengthen the wind of democracy by writing what Abiy Abinot (the son of the revolution) was doing for our country. We were all thrilled, intoxicated by the promises of a bright future in the continuity of the four-party governing coalition: the EPRDF, which for almost thirty years had guaranteed economic development and stability as well as making a vital contribution to the fight against Islamic terrorism in the Horn of Africa region.

A regime that, after having brought Ethiopia out of the dark Middle Ages of the Amharic imperial era and DERG red terror, transforming the country into a worldwide success story and tripling the standard of living of the population, was capable of review its policy, initiating democratic openings. Abinot was an integral part of this Perestroika wanted by EPRDF. The link between Abiy and TPLF was cemented by 10 years of military and political collaboration.

A Perestroika necessary to avoid a civil war that had been smoldering since 2012. It was clear to everyone that the social confrontation with the main ethnic groups: Oromo and Amhara was leading to military confrontation. The EPRDF, of which the TPLF was the majority party, chose peace by giving to a young politician (Abiy Abinot) the post of Prime Minister with the task of making the democratic process irreversible. It was a mature and agreed choice.

Finally, peace came with Eritrea, which increased the enthusiasm of over 100 million Ethiopians and mine as well. It did not matter if the details of the agreement had not been disclose. There was peace! The EPRDF would have progressively imposed a democratic change also in Eritrea because democracy is more contagious than the Covid19 virus. The dictator Isaias Afwerki and North Korea country in African sauce would soon be a horrible but distant memory. The Eritrean brothers would also be free.

Unfortunately, no one at the time understood the deception of Abiy, the nationalist Amhara leadership and the dictator Afwerki. An evil trio that filled their mouths with peace and democracy to better prepare war and dictatorship. The first sign came in July 2020 when hundreds of Ethiopian citizens of Oromo nationality were slaughtered like beasts just because they protested the murder of singer and activist HaacaaluuHundeessaa accusing the government of having commissioned the murder.

After the massacre of the Oromo, events precipitated and the true intentions of the Emperor became clearer until they were confirmed without a shadow of a doubt when he decided to wage war against a part of his population in Tigray and Oromia by associating foreign troops in the enterprise.  No one had dared to appeal to foreign troops to slaughter their own population. Neither Haille Selaissè, nor Mengistu.

We returned to the Amhara emperors and DERG dark age. Spies returned to listen people’s speeches and report to their masters. Control over the internet, WhatsApp, social networks returneddouble increased. No matter if the privacy of citizens is harmed. The important thing is to know who was against Abiy, Agegnehu Teshager, Temesgen Tiruneh. Ethiopian Embassies returned to report on the “unwelcome” behavior of the diaspora. Instead of democratizing Eritrea, these three Ethiopian leaders allowed Afwerki to teach them how to dominate and repress an entire people with terror and blood.

Since November 3, 2020, not Tigray but the whole of Ethiopia has plunged into a bath of blood, crime, sexual violence, ethniccleaning. Freedom of the press and expression ended as if by magic. As in other conflicts generated by archaic and brutal African dictatorships, even the Ethiopian one began to identify in the journalist the first enemy to silence. The civil war has transformed the wonderful country of Ethiopia into the most dangerous place for journalists, after North Korea and Eritrea. Ethiopia ranks 101st out of 180 in the annual press freedom index compiled by Reporters Without Borders.

The list of journalists and media victims of persecution, brutal physical attacks, arbitrary arrests, espionage and expulsions is incredibly long. A repressive and premeditated policy aimed to discourage independent information about Tigray and Oromiaconflicts. The son of the revolution wanted to wage an extermination war against his own people without the world knowing.

All these persecuted journalists and media have been accused of being connected to the “terrorist group” TPLF, spreading (for profit or ideological affinity) the enemy’s propaganda. The same accusation leveled at me by the Ethiopian Embassy in Rome in its letter of 26 July 2021, which, evidently, responds to directives received from the central government of Addis Ababa in Amharic and poorly translated into English.

The letter, which Focus On Africa editorial staff received, relates to the disappointment expressed by the Ethiopian diplomatic corps in Italy that the prestigious Italian newspaper was hosting a “propagandist”, myself. According to the diplomatic representation in Rome, my articles, full of prejudices and false news, diminish and disrespect the Italian public and the Ethiopian people. The letter contains the same rhetoric and ridiculous and absurd accusations used to arrest Ethiopian journalists, expel foreign ones and rage on any national or international media that dares to write about the ongoing civil wars in Tigray and Oromia.

A duty to report the facts originated not from the alignment for or against a political faction but to Raise awareness to public opinion on the need for peace and national dialogue. Urgent needs considered of vital importance to try to rebuild a country torn by ethnic hatred and war, constantly rejected by Amhara leadership, by the dictator Afwerki and, consequently, also by whoever occupies the role of Meshrefet.

There is not much to analyze in the letter received from the Ethiopian Embassy in Rome, other than underlining the gross attempt at censorship to interrupt my (free) collaboration with Focus on Africa with the clear aim of applying state censorship beyond Ethiopia borders. Censorship has always been a political tool of dictatorships as free information is the crucial element of effective democracy, feared by dictatorial regimes.

Censorship and freedom of the press have always been at war with each other and will continue to be. Censorship is the weapon of those who exercise power with force and terror. Tothose who want hide their plans (including extermination) and therefore poorly tolerate independent press, considered as an affront to those who, to legitimize themselves before to their own people and to the outside world, they know nothing other than the imposition of violence. In the final analysis, censorship is worse than murder, as Gustave Flaubert reminds us, as it is the attempt on thought, an injured soul crime.

Censorship has become one of the many weapons for the Ethiopian warmongering regime to try to win the war unleashed by the inability to face the clash with the opponent on a political, democratic and civil level. One weapon among many, to be associated with the humanitarian blockade, hunger, sexualviolence against 7 million of its own citizens and the absurd crusade against all humanitarian workers accused of supplying weapons to Tegaru “terrorists”.

In reading this letter I smiled at the propaganda clichés it contained and at the same time I understood how much this regime, in which we all had placed our hopes of living in a better Ethiopia, is degenerated to the point of trying to censor foreign journalists miles away from Ethiopia.

I also realized that as long as this regime remains in power, I willnever be able to return to my beloved Ethiopia where I have spent many years of my life. A bitter and forced exile. I don’tdare to imagine what would happen to me if I came back in the actual political contest. Many of my friends Amhara, Oromo, Tegaru have already died in the battles wanted by the new Emperor, supported exclusively by dreams of power, religious extremism typical of the Protestant sects and mother divinations. Still alive in my soul the memory of their smiles, their hopes, their will to live. My heart is full of tears about eternal mourning because no one will be able to revive them.

Suddenly I am receiving death threats from Ethiopian nationalist extremists, some even posted on Twitter (see photo). It had never happened before. I have never believed in coincidences, so it is reasonable to assume that I have been included in the list of victims of the ongoing organized campaign on social media against foreign journalists and media, conceived and promoted by nationalist Amhara leaders.

A campaign of pure hate against us journalists similar to the one promoted on 2016 by the HutuPower regime of the military junta in power in Burundi. One of the many weapons that totalitarian regimes use in the attempt to annihilate every critical and independent voice, whether national or foreign. In a climate of war hysteria and racial propaganda from threats to the real act, it is often a short step.

It is enough that the right opportunity presents itself. Living and working in the region that opportunity could arise. A risk that I take into due and serious consideration but that does not scare me because those who choose investigative journalism must be aware of the risks and ready to pay the consequences, even the most extreme ones.

I thank Focus On Africa which, in addition to giving me the opportunity to respond to the insidious slander that has been thrown at me, has demonstrated with concrete acts all the solidarity and support to myself and to free and independent information.

I also thank the Ethiopian diplomatic corps in Italy for this letter as it reinforces the belief, that is at the basis of the information service that I constantly propose.

A journalist’s duty is to tell the truths that the powerful don’twant to hear. Everything else is propaganda.

Fulvio Beltrami Independent and free journalist West Africa and the Horn of Africa.

Note. This is a personal intervention not necessarily linked to the editorial line of the editorial staff of Focus On Africa which I asked for publication, appealing to the constitutional right to be able to respond to the insinuations addressed to me by a foreign government currently in a state of civil war. Any responsibility for the content of this article must be attribute solely to the undersigned.

The elections on 21 June will be characterize by a very low turnout. There are…