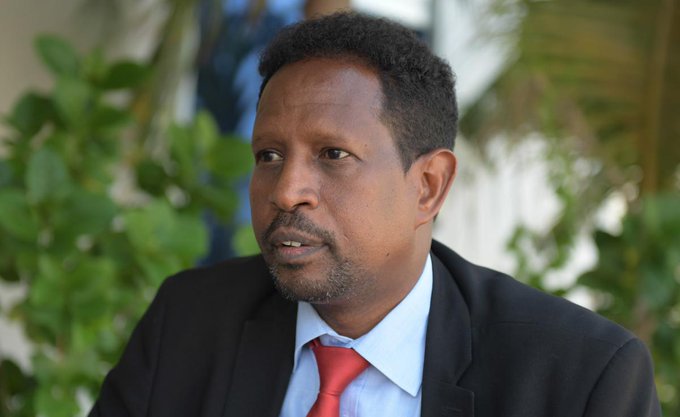 This time it was a woman kamikaze who blew herself up in the mayor’s office in Mogadishu. Eleven people were killed and many were wounded, including the mayor of Mogadishu, Abdirahman Omar Osman who was immediately rushed to Quatar for treatment.

The Mayor of Somalia’s capital city is a layperson, pro Italian, and determined to fight terrorism which he established once again earlier on in the day when he met with United Nations special envoy to Somalia, James Swan, before being wounded in the blast. The shocking dynamics of the attack emerged soon after the suicide bombing: the explosives were detonated by a young woman accompanying a disable and blind girl the mayor had helped.

Omar Osman is a good person.

We met for the last time last month for an interview, in the one and the same office. He is a fellow journalist and was an activist for the Somali community many years in London. He was later summoned by  transitional governments to Mogadishu. He was a spokesperson and minister for the government before being elected Mayor and Governor of the region.

The Mayor of Mogadishu is charismatic and is contributing to renewed awareness in the common battle against terrorism led by Al Shabaab, the Islamist group that claimed responsibility for the attack in which he was wounded.

A few months ago, in collaboration with the Somali government and Italian cooperation, Omar Osman promoted an exhibition in Mogadishu on the city’s history and architecture. At the inauguration last December, he participated at the event with the Italian Deputy Minister of Foreign Affairs, Emanuela Claudia Del Re, who was in Somalia at the time.

In a context marked also by external interference and forces taking advantage of the weakened state of the country, Italians are always welcomed.