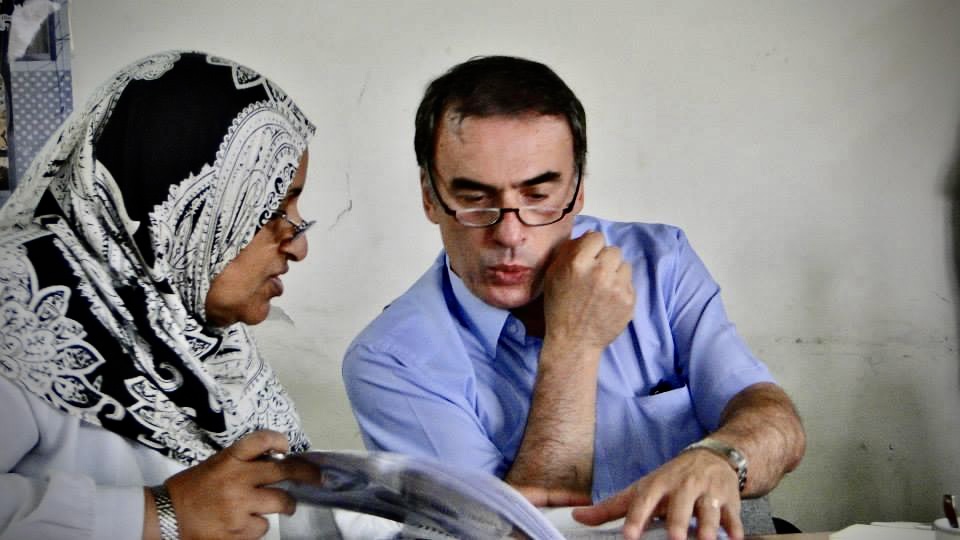 Every time I travel, I lose something of myself, but I receive something from the world.

Even this mission to Niger, where I have never been, promises to restore a sense of priorities and to reconcile with what really matters, at least for me, beyond the accumulation of nonsense that I have gone through in the last two years: an media ordeal orchestrated by a group of liars who created a kind of parallel world.

Now I get back on the road, once again, with convinced and precious human inspiration, not just professional motivation, to close the circle of my life.

I started living and working as a doctor with CUAMM and with CUAMM I am going to conclude my story thanks to Dante, doctor and priest, successor of Don Luigi. He, Anacleto Dal Lago, the many friends who have remained so for forty years, have taught me a lot, and have certainly given me much more than I have been able to give back over my professional years.

It was Tanzania at the beginning; this time another place on the same continent from which I painstakingly learned the essence of a human being and where I raised my first two children.

Life is not very strange in the end and this continuity tells me: what has never disappeared is the love for the least, the attempt to understand their suffering and, most of all, the hope that pervades everything and does not disappear, never, which nourishes an entire earth, where everyone is expected to make their own small contribution, the classic drop, to give back what the chance of birth always manages to give to a few and deny to many.

We leave for Istanbul, for an intermediate break full of the usual strong scents of Turkey running on a tumultuous and contradictory march towards an uncertain tomorrow, which will lead all of us somewhere together, as we have grown up sharing the same sea and the same magical air.

And then towards Niamey, passing over those countries that have been my second homeland for a long time: Palestine and Jordan, with my closest friends who still can’t see that full own tomorrow, and Egypt first, then Libya. How many memories now. How many things done, how many people met and then left: how much study, how much work, how many dangers faced, even unconsciously, because the cause was worth the risk.

And how many friends lost along the way of life.

The encounter with the three religions has never thrilled me, perhaps because I have always tried to resist the attempt to understand the incomprehensible. You believe it or you don’t believe it. Maybe we shall think about it later when the final moment approaches.

There is always an after for these issues.

We land in Niamey: a new, beautiful, functional airport, built by the Turks as an instrument of their policy of (re) expansion in this part of the continent. The trained staff, quick and kind, the Embassy car ready and the African night around, alive even if there is no one around in a deserted city, clean and well-kept like few others, even in its dignified poverty.

And then ministries, bishops and Embassies that open the doors of hospitals and clinics to us, where the usual suffering appears, accompanied by the painful sense of helplessness that has beenmy constant company since I started this profession.

Women sitting in the microscopic gardens of Niamey’s great maternity hospital, hanging from tubes of saline or glucose, the two blunt weapons that we use whenever possible. Women waiting for the new birth: I have never understood if they feel they must, or whether they keep the fresh expectation of a new life that opens up a future that is very often already marked, with a fierce fight for survival. Here, in the most devastated area of ​​the world for maternal, neonatal and infant mortality, with a human development index adjacent to hell, this fight is lost very often. Nevertheless, they still try, and try and sometimes succeed, with the stubbornness of the human tribe.

Population is growing and too fast, compared to the water that is not there, despite the great river flowing a few meters, to the food that deteriorates rapidly at 47 degrees in summer, to the harvest that disappears in the hot and arid desert wind or that the attacks of armed gangs, never so wretched and murderous as in this extreme environment, prevent them from being cured to survive.

I also visit the madhouse in the national hospital: as usual, not many staff, no drugs, the condemnation of those who manage to reach the only psychiatric facility in the country to live in any case marginalized by everyone and also excluded from the possibility of a conversation, of that exchange of words which is often therapeutic under certain conditions. At least I do not see the chains on the ground of many other places that I have visited and with which these people are deprived of the last residue of dignity.

It is a good start: there is no ostentatious insensitivity with which healthcare personnel try to overcome the threatening and evident burnout at every latitude in which I have worked.

The doctors are good, the nurses are there, and they walk incessantly from bed to bed (bed? A crowded simulacrum, but again nothing new), as it happens in every hospital.

The point, if anything, is another, and it is the same as in our areas of work as seen in the pandemic: a hospital – you may like it or not – is the place where the disease is treated, but not the place where health is built and defended, where the community isprotected against risks that we know very well, but which too frequently do not have the tools and resources to fight.

What is there, outside the houses, the urban belt, the mutual aid aggregations with which a city hopes for tomorrow? What happens, for example, to the migrants in hostile land who disappear in directions that no one can identify, if not the managers of the modern trafficking which, after centuries, replicates itself with updated tools to master an ancient slavery? Who vaccinates, who protects the water sources, who prevents climate change from destroying the crop, who destroys the waste and their clouds of mosquitoes and flies, who prevents the attacks of major diseases whose damage is amplified by physical attacks with firearms?

I enter the largest private hospital in the region, built by a friendly nation, ready to exchange a built asset here too with raw materials and the energy resources that become more precious than money. It is well known that international cooperation is animated by interests: it is only a question of diagnosing and balancing them in the constant search for a balance between giving and having, set aside during the centuries of the robbery of Africa’s extraordinary human resources, and revitalized by development ethics often one-sided in a vision straddling neo-colonialism and national interest, with cooperation professionals in the middle: they try their best, and sometimes even succeed.

It has always surprised me how often it is just enough to really believe in something and go straight ahead, resisting chimeras and projects rich only in money: CUAMM is one of the agents of this change, together with a concert of friends and colleagues, many other organizations, volunteers, missionaries (how much I have reassessed them over the years), members of a civil society that sometimes find the tools of true solidarity, that of micro-projects that have the only ambition to improve the living conditions of those around us. I no longer believe in the pharaonic and ambitious works of the great projects that have promised epochal changes that never took place: a river of money, many times the wonderful river on which we pass and that continues to flow for reasons and in directions that we do not know and that no one talks about any longer.

And then, here are the meetings with those in command: surprisingly qualified people, of great vision, with a rare clarity of horizons and the awareness of risking being hostages in their country and gears of a great global machine that always threatens to crush their expectations of progress. and well-being. But they believe it and it shows. They have that light and enthusiasm that I remember seeing only in the greats of the past with whom I shared a few moments of discussion, before they disappeared, and not always for natural causes.

But here is that energy and that will shine through, and that’s enough.

We return after meeting the Italian Embassy and staff working in several domains, such as cooperation, military and security: I cannot forget the last time I met Ambassador Attanasio in Congo, before he was killed: he had the same light and the same energy that I observe today. This gives hope and undermines the natural skepticism in which we take refuge every time we talk about work programmes with people who do not yet know each other wellenough.

It will be fine: we are reading and decoding a situation where there are three lines of intervention that CUAMM will have to evaluate whether to follow or not. Difficult in a difficult land: but CUAMM has always taken up the challenge and won it, with the dedication, will, ethics and professional ability to which I am happy to have made a small contribution.

We return. Same route, with a sumptuous sunrise that greets us from the desert at the time of take-off, which hides the poverty, misery, and death that we hope to be able to help fight together. It will take years and a lot of effort, perseverance, and trust: but the CUAMM guys will still make it.