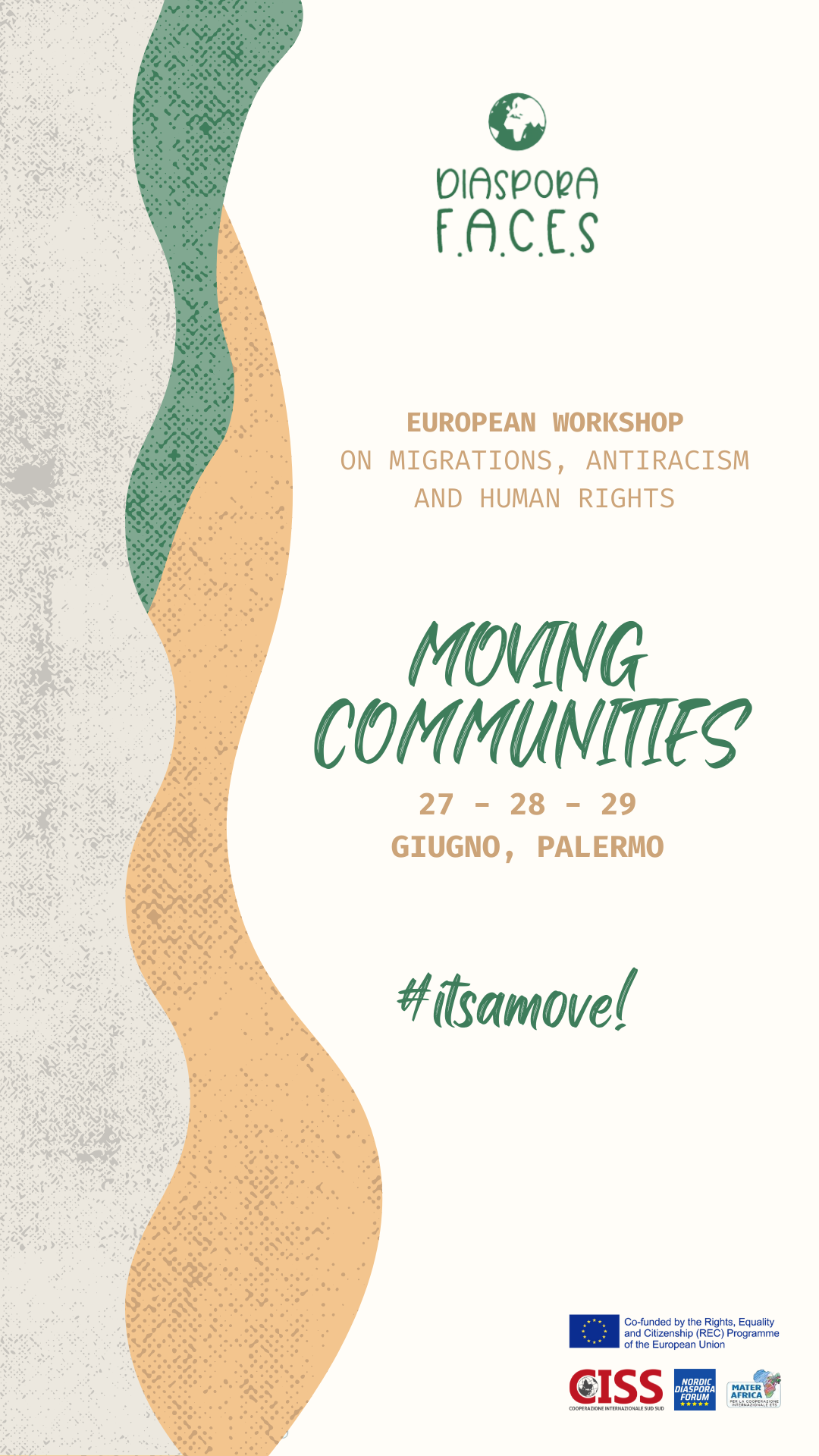 Europe of Rights starts again from Palermo: Moving Communities, the workshop and Manifesto against racism and Islamophobia, is coming from 27 to 29 June.

Organized by CISS – South South International Cooperation, with the media partnership of Focus on Africa, the three-day workshop will take place at Camplus. A moment of discussion and participation in which the realities of European civil society meet to give life to the Manifesto Moving Communities, Comunità in Movimento.

The initiative brings to Palermo different expressions of Italian and European civil society such as Razzismo Brutta Storia, Doctors Without Borders, ENAR – European Network Against Racism, LVIA, Stravox, Focus on Africa, Forum Antirazzista and many others that will work together to co- create the Moving Communities Manifesto with the aim of devising a shared strategy to combat anti-migrant racism and hatred by triggering lasting and concrete change.

During the last day, the work carried out in previous meetings will be presented in the presence of the President of CISS Sergio Cipolla, the former mayor of Palermo Leoluca Orlando, the former mayor of Riace Mimmo Lucano, the journalist Andrea De Georgio, the lawyer Giorgio Bisagna and representatives of the Carta di Roma and Doctors Without Borders. The city of Palermo, and its civil society, for decades has stood out not only for its being an open city, aimed at confrontation and dialogue, but also for a very strong political stance towards mobility as a right: “There are policies for managing the migration phenomenon, which by their nature can change in one direction or another, “states the President of CISS – South South International Cooperation” but there is also a feeling of society as a whole that is very often much more advanced of these policies. This was demonstrated in Poland by the many people who spent this winter at the cost of considerable risks in helping migrants and refugees who risked being rejected and the whole history of the city of Palermo, since ever open to recognizing the right to mobility of every human being, has proved it.

It is therefore the fundamental task of civil society to always fight for politics to adapt its choices to the deeper values ​​that animate it. ” In recent years, the phenomena of racist and xenophobic violence have increased across Europe. According to the latest reports by the FRA – Fundamental Rights Agency of the European Union, ethnic and religious minorities in Europe are among the groups most discriminated against on grounds of gender, religious symbols and skin color.

In Italy, according to the data collected in the White Paper on racism published by Lunaria, the two-year period 2018-2019 was the worst in the last ten years and most of the episodes are attributable to demonstrations and racist acts of Islamophobia and afrofobia. As emerged on March 21 during the second edition of the EU anti-racism Summit, major political challenges persist and a high level of inter-institutional commitment and cooperation is needed to address them.

In partnership with the Nordic Diaspora Forum and Mater Africa as part of the Diaspora f.a.c.e.s. co-funded by the European Union, CISS – South South International Cooperation is preparing for a three-day workshop divided into thematic groups to discuss racism, discrimination, violence, citizenship and European migration policies through debates, book presentations and reports with a final day open to the public, that of June 29, where the Moving Communities Manifesto will be officially presented at a press conference.

EVENT TAB – in media partnership with Focus on Africa

Dear Focus on Africa, I am writing this letter in the hope that our request…