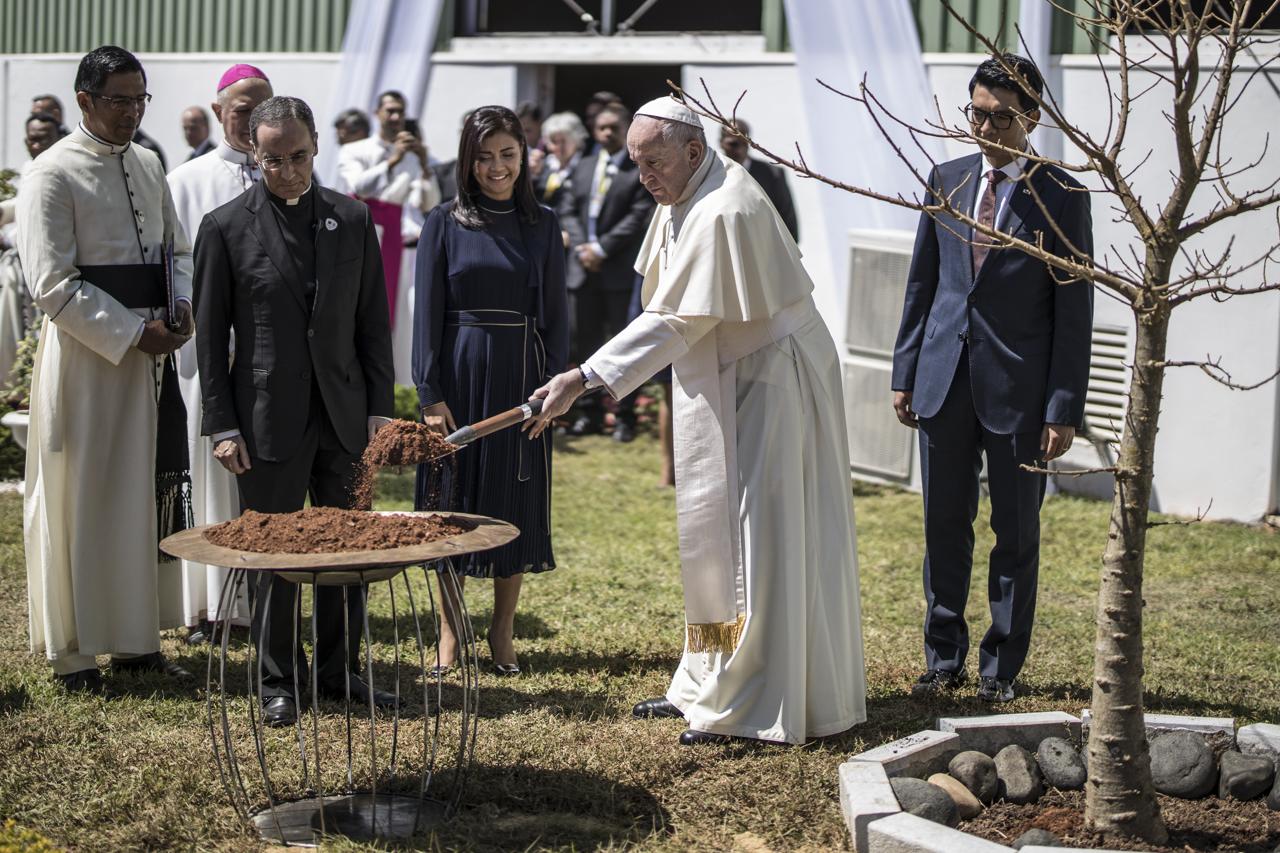 From the appeal against deforestation that is devastating Madagascar to the need to guarantee a dignified life and a job to members of the community. These were the moving themes addressed in the last day of public meetings by Pope Francis in Mozambique. He is currently in Mauritius and leaves tomorrow for Antananarivo and his flight back to Rome.

“Poverty is not inevitable!” He exclaimed calling on young people to, “never stop fighting the baneful effects of poverty; never yield to the temptation of settling for an easy life or withdrawing into yourselves.”

“As we look around us, how many men and women, young people and children are suffering and in utter need!  This is not part of God’s plan,” he said in his homily at Mass at the Diocesan Grounds of Soamandrakizay in Antananarivo where he encouraged people, “not to dilute and narrow the Gospel message.”

“It is hard”, he continued, “to follow [Jesus] if we seek to identify the kingdom of heaven with our personal agenda or our attachment to an ideology that would abuse the name of God or of religion to justify acts of violence, segregation and even murder, exile, terrorism and marginalization.”

“In the face of contempt for human dignity […],” the pope said. Christians “cannot stand with arms folded in indifference, or with arms outstretched in helplessness.  No.  As believers, we must stretch out our hands, as Jesus does with us,” he continued defining it as “one of the worst forms of enslavement: living only for oneself.”

“It is the temptation to fall back into our little universe,” he stressed,  “and it ends up leaving little room for other people. The poor no longer enter in, we no longer hear the voice of God […]”

The Pope also warned not to, “be limited or reduced only to bonds of blood or membership in a particular group, clan or particular culture. “When “family” becomes the decisive criterion for what we consider right and good,” he added, “we end up justifying and even “consecrating” practices that lead to the culture of privilege and exclusion: favoritism, patronage and, as a consequence, corruption.”

Pope Francis’ brief stay in Madagascar earned him the title of the “Green Pope”, or rather, the eco-friendly pope, but it may be more appropriate to call him the “Pope of Integral Human Development”.

Let’s start from the end of his visit. Pope Francis spoke about poverty and people who have nothing at all, “This is not part of God’s plan,” he said at Holy Mass in front of a million people. Poverty brings people and populations to their knees. “By lifting our gazes” and seeing human suffering, people will understand that they cannot follow Jesus, “if we seek to identify the kingdom of heaven with our personal agenda or our attachment to an ideology that would abuse the name of God or of religion to justify acts of violence, segregation and even murder, exile, terrorism and marginalization.”

To young people in Madagascar who praised him for hours, Francis identified a mortal danger, a thought that will defeat us through its bitterness: “Therefore… nothing can change and nobody can do anything.”

But, credibility in the face of the resignation in Madagascar demands commitment, dedication and vision.

Every year in Madagascar, where 75% of the population lives below the poverty line, 200,000 hectares of forests are lost, and by 2040, the rain forest could disappear for good. That’s why Pope Francis met with the people of Madagascar exactly one month before another apostolic journey that is having difficulty attracting attention begins; the Amazon Synod.

Madagascar, as well as Mozambique which he visited recently, is one of the places where the pope had a duty to visit in order to transform the approach important to Paul VI into a worldwide reality and finally bring it back to the foreground: Integral Human Development. Protecting humans and protecting the environment cannot be separated in integral human development. Therefore, in the Amazon like in Madagascar, an attempt to put the integral human development approach into practice is being made. The pope defined the poverty he found there, that forces 3 out of 4 Madagascans to live on less than 2 dollars a day – the infamous “poverty line” – as inhuman. Whereas environmental crimes are blooming, starting with the pillaging and smuggling of parts of an environmental heritage that is unique to the world and specific to Madagascar, in particular its precious rosewood tree, prized for its resistant wood because the tree grows slowly.

The barons of the rosewood trees in Madagascar are extremely rich, like others who have specialized in similar environmental crimes against one or more important world heritage biodiversity assets, in addition to gold, another lucrative smuggled good.

The pope immediately reminded President Rajoelina – elected because of his promise to fight corruption, an urgent need seeing as the country is one of the world’s top-ranking countries for corruption – that “the deterioration of biodiversity compromises the future of the country, and of the earth, our common home”. Madagascar is one of the temples of biodiversity; 89% of its flora and fauna can’t be found anywhere else in the world.

Yet, deforestation is moving at a fast pace. It exploits the poor who lose their full earnings to obtain a gram of survival. “As you know, the last forests are menaced by forest fires, poaching, the unrestricted cutting down of valuable woodlands. Plant and animal biodiversity is endangered by contraband and illegal exportation,” Pope Francis said.

“We have also come to realize that we cannot speak of integral development without showing consideration and care for our common home,” he added.

He went on to say, “This calls not only for finding ways to preserve natural resources, but also for seeking “comprehensive solutions which consider the interactions within natural systems themselves and with social systems. We are faced not with two separate crises, one environmental and the other social, but rather with one complex crisis which is both social and environmental.”

This means that today many disparate people are creating their own conditions of poverty and being forced into activities of deforestation in order to survive and hold onto a piece of fertile land. This is human integral development; “So it is important to create jobs and activities that generate income, while protecting the environment and helping people to emerge from poverty”.

Skepticism isn’t necessarily his fault nor his political qualities alone, but rather the knowledge that either the world chooses to take human integral development called for by the pope into consideration, or Rajoelina will have a hard time of it on his own, even though his intentions are good.