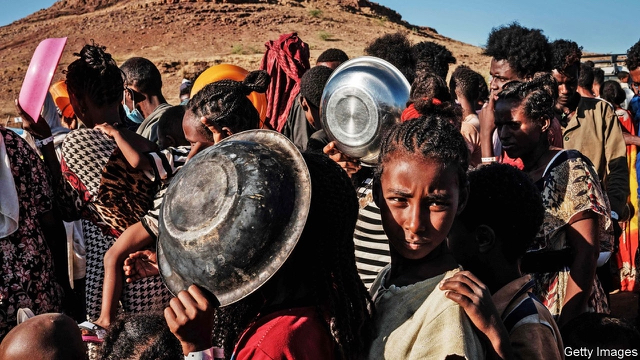 Africa risks, in such historical juncture crossed by the war that the Russian aggression against Ukraine has unleashed on the eastern border of Europe, a profound food crisis to which all analysts of international political issues draw attention. With consequences the extent of which is difficult to calculate now. The dependence of African states on supplies of wheat and other cereals from Ukraine and Russia is, in fact, very high. The UN estimates that the percentage of African imports of these primary goods from the two countries currently at war is over 40%. Ships loaded with grain blocked in Black Sea ports threaten to aggravate the continent’s already difficult living conditions. Neither the recent visit to Moscow made by the president of the African Union, Senegalese Macky Sall, together with the president of the African Union Commission Moussa Faki Mahamat, to try to reach an agreement on the matter, seems to have had some effect if not offer a propaganda opportunity to Putin.

Yet, Africa does not lack the resources to escape its dependence on other countries of the globe and gain a position that protects it from the dangers to which it is exposed today. There is no need to continue to mention the riches available to the territory and which are coveted by all the world powers, committed to finding raw materials to ensure a prominent place in the next geopolitical order. Left, today, to exploitation by foreign nations – and by companies and businesses related to them – in exchange for remuneration intended to finance a power that is maintained mostly with weapons, violence and terror, they could instead be a source of income sufficient to cover the needs of the entire African population and raise their fortunes. And perhaps not to allow a neocolonialism – more insidious than the previous one practiced by European countries – which has its national matrices in China, Russia and Turkey to proceed undisturbed in grabbing Africa and its inhabitants and becoming the master of both.

Of course, changing this state of affairs to initiate some transition towards a future of conscious promotion of African identity is a difficult undertaking. But small steps in this direction can be taken. Sometimes – paradoxically – this happens thanks to fatal events which, by changing the scenario of the world in which we live, force us to rethink it. How, in fact, the war waged by Russia on Ukraine is waging, which – with its economic impact on people’s lives, almost everywhere – has already forced many countries, including Italy, to review their internal conditions and redesign their development prospects.

It should be remembered, for example, that Africa is, from a territorial point of view, one of the largest continents. And that intensive agriculture, unknown to most, is not practiced at all. It is true that the climatic conditions are not the most favorable. But technological advances, if properly employed, can transform lands that are otherwise ready to become desert into plantations. Cutting-edge technologies, industriousness and targeted investments can make even the most unproductive land fertile, transforming a hostile environment into a manicured oasis. This is what the State of Israel has done – albeit in a somewhat too unscrupulous way that has not favored good relations with the Palestinian population, uses to other, more traditional ways of life – the State of Israel in the square kilometers of land that descend. to the south and extend towards the Red Sea.

That this is a particularly interesting prospect, however, is demonstrated, in hindsight, by the many initiatives underway – by international agri-food companies, foreign governments and private individuals – for the hoarding of uncultivated land and vast agricultural plots in depressed areas of the world to exploit the products obtained there.

It is the so-called land grabbing, a phenomenon that intensified in the first decade of this century and that today is practiced almost everywhere on a large scale. 70% of land acquisitions are concentrated in sub-Saharan Africa. But even the regions of the Horn of Africa – Ethiopia among the first – victims of the ongoing economic and food crisis, are conceding land to multinationals. Preparing to become – once again, unfortunately – dependent on others for their own subsistence and to remain without productive independence in an area of primary importance such as food.

There are few cases of good use of the land and direct exploitation of its resources. Mostly due to missionary funds that finance the initiatives. But the results are not lacking. The workshop held in June in Nairobi brought as an example, among others, the entrepreneurial experience of the sisters of Kamasa, Zambia, who started an aquaculture and poultry, goat and pig breeding experiment that employs more than 300 workers. seasonal and employs about 250 farmers from small cooperatives. In addition to giving an income that contributes to the maintenance of more than 900 pupils from poor families. Similar experiences are repeated in Uganda and Kenya.

These are, of course, sporadic cases and of modest dimensions, which do not modify the scope of the problem. But it is a question of starting, as far as possible, a process that will enable Africa to draw on its natural raw materials for the sustenance of its populations. And to exploit the immense expanses of land that – with the help of new cultivation techniques that enhance its potential and rectify its defects – could be made fertile and become an opportunity for well-being. How are the agri-food multinationals and foreign governments preparing to do, expecting large profits. China above all. And while the food crisis looms on the horizon for the African peoples, the vast lands of the continent, awaiting attention that is struggling to reach those who have always lived on the soil of Africa, are still lying uncultivated and abandoned to a destiny uncertainty, that does not bode well.