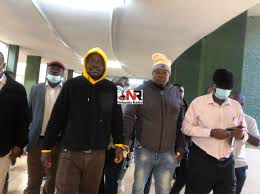 Members of political opposition Job Sikhala and Godfrey Sithole were arrested on 14 June after attending Moreblessing Ali’s funeral. Ali, a political activist, was missing for three weeks before being found murdered and her body mutilated on 11 June. The Zimbabwean authorities have accused them of encouraging their supporters to cause violence in Nyatsime, Chitungwiza, during Ali’s memorial.

Job Sikhala, chairman of Citizens Coalition for Change, and Godfrey Sithole, MP for Chitungwiza North, were denied bail when they appeared in the magistrates court and they have since appealed to the High Court. They are still denied access to their lawyers.

Sikhala’s arrest is politically motivated. He has been arrested a record 67 times on politically-motivated charges without conviction.