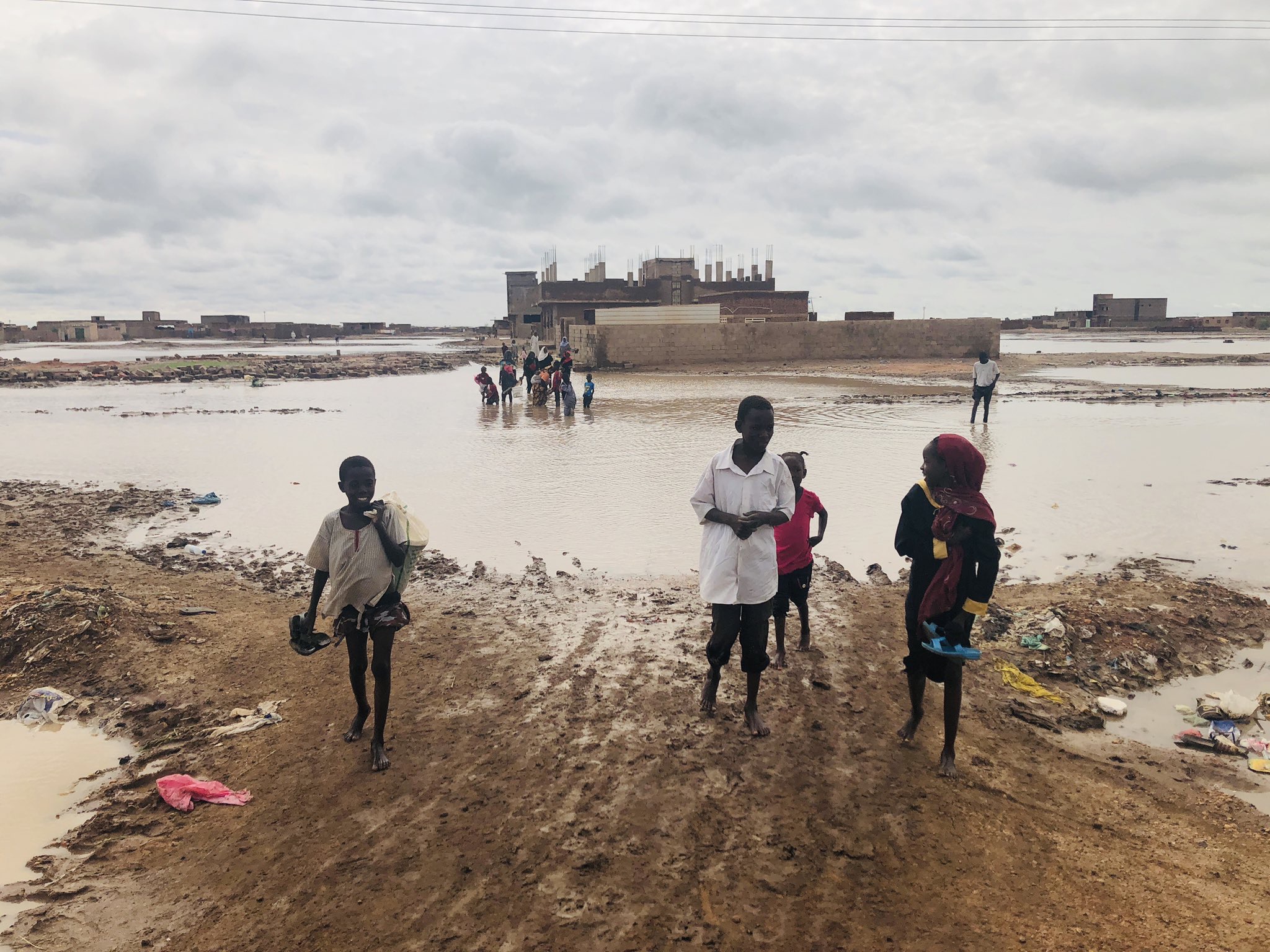 The dark gray skies of one of the most devastating rainy seasons in recent years that counted over a thousand homes destroyed and seven deaths, looms over Khartoum threatening the celebrations for the establishment of a transitional government.

Houses are flooded, crops are ruined, roads are bumpy and treacherous to drive on. Most of the neighborhoods in Khartoum and its twin city, Omdurman, are inaccessible.

Hundreds of evacuees have momentarily been set up in a tent city that offers poor shelter and little safety.

The rains continue and the risk of further calamities and the spread of infection are inevitable.

Despite damages caused by the floods, the Forces for Freedom and Change alliance and the military government that has been in office since the coup d’état on April 11 that ousted President Omar Hassan el-Bashir, are formalizing an agreement in the capital of Sudan, marking a historical date.

While the country gets ready to take its first step towards a democratic future, – at least this is what the Sudanese hope after the protests that began in December 2018 led to the fall of a thirty-year dictatorship – the former dictator, who is accused of corruption and war crimes, is on trial facing the charges made against him by the prosecutor’s office that is asking for the death penalty.

While a dark curtain is about to drop on Bashir, the spotlight is now on Abdalla Hamdok, an economist who was named to lead the sovereign council until 2022.

His nomination was unanimous and on August 20 he will be appointed Prime Minister of the transitional government together with ten members selected mutually by the parties who signed the agreement on August 5 in Addis Ababa, ending the protests.

The council members have already been selected, as well as the head of the judiciary and the public prosecutor, Abdel Gader Mohamed and Mohamed Al Hafiz Mahmoud respectively, both independent magistrates who immediately showed their support for a democratic government in Sudan lead by civilians.

Despite the destruction caused by floods and the devastating economic crisis that continues to afflict the people of Sudan, the country seems to be moving forward with optimism.

But the overall situation is extremely complex, explains Lana Haroun who was actively involved during the protests against Bashir and who shot the photo of Alaa Salah, the student who incited protesters in Khartoum, chanting protest songs: a photo that went viral.

“Due to the increase in the price of fuel, the gas stations that should help to drain rain water are not working,” says Lana. “We have been dealing with the problem of floods for weeks. Over 1,000 homes were flooded and completely destroyed. Furthermore, the health and sanitary situations are devastating. We fear the first deaths caused by malaria and cholera may begin soon. There have already been many cases diagnosed and the hospitals don’t have enough medicine for everyone. We certainly didn’t want to begin our future like this… Pray for Sudan,” concludes the young activist whom, along with the Sudanese population, has waited for years to see a historic day such as the one currently taking place in extremely tragic conditions.

From Khartoum to Omdurman, especially along the Nile that flows through the city, the scars of devastation caused by the monsoons are clearly evident.

A bitter beginning for a new government that, in addition to piecing the social fabric torn by repression and violence back together, will have to help the economy of a country on its knees after a long and as yet unresolved crises, back on its feet.