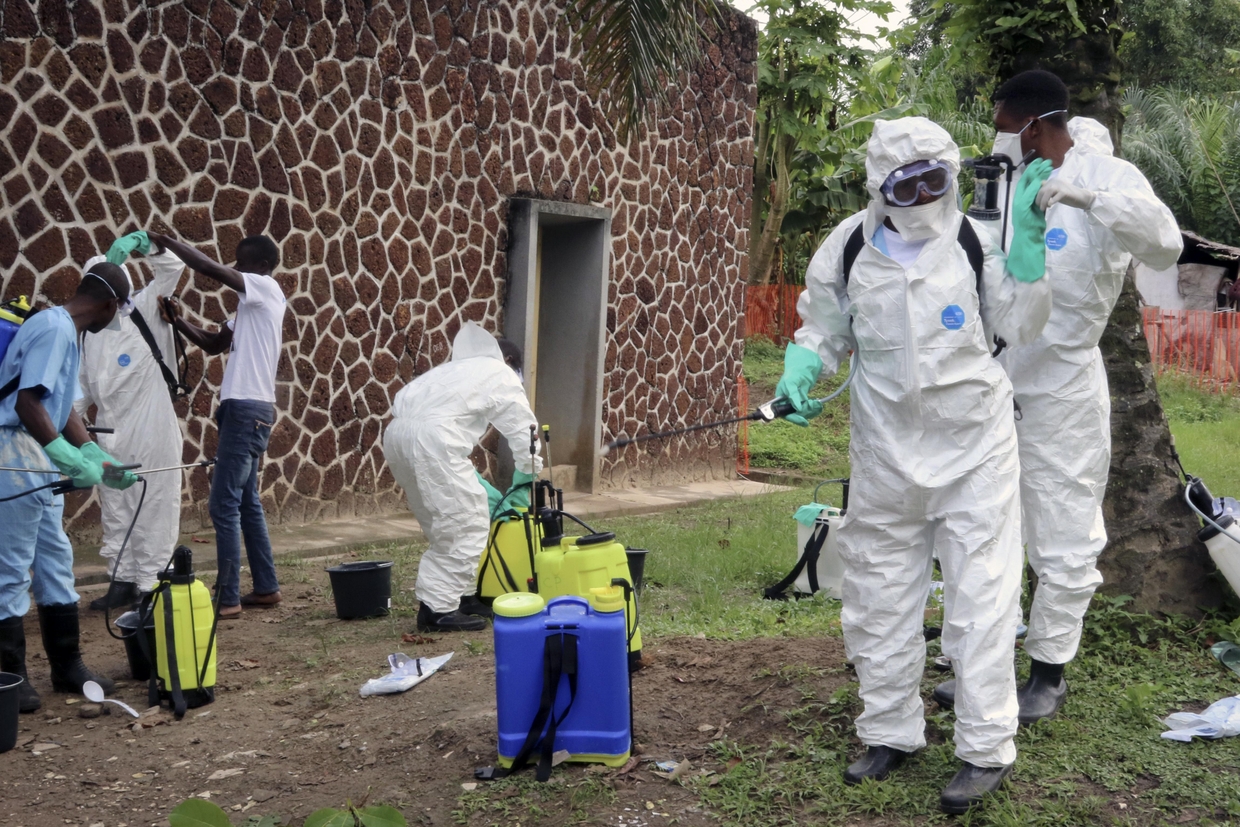 Ajar arrived from Butembo to the Ebola Treatment Center in Goma on July 15, weak and semiconscious. He was the first patient struck by the epidemic in the area surrounding the city of Goma in the Democratic Republic of the Congo (DRC), a city with a population of over two million near the border with Rwanda.

After lab tests by the Ministry of Health confirmed the presence of the virus, the patient was put in an isolation ward and received the necessary medical treatment.

Ajar’s admittance to hospital presented an alarming development: proof that the virus was spreading and could go beyond the Congolese borders.

In just over two weeks, the number of patients registered in Goma rose to five, two of which died, thereby further increasing the alarm. Rwanda’s decision to close its borders without first consulting with Kinshasa [the capital of DRC], was not surprising.

A few weeks previously, the World Health Organization (WHO) declared the Ebola outbreak in North Kivu, that caused over 1,600 deaths, a Public Health Emergency of International Concern (PHEIC).

Kivu, the center of a war that has been raging for 15 years, and Ituri are the regions that have been hit the hardest. A year after the first cases were diagnosed in a large urban metropolis, it is clear that Ebola containment hasn’t been effective.

The current outbreak in DRC is the second worst in the history of the disease after the epidemic that hit Guinea, Liberia and Sierra Leone from 2013 to 2016.

For months the NGO, Doctors Without Borders (MSF) Italy, that actively participates with various local hospitals and with its own medical facilities, has been seeking a breakthrough in stopping Ebola outbreaks.

A change of pace that, according to international operators, cannot take place without the collaboration of patients and their families who must be directly involved in managing the virus.

Raising awareness on how to contain the spread of the virus is the main challenge. The crucial point is that vaccination campaigns must reach as many people as possible.

However, more vaccines, medicine and tools are also needed to treat other serious medical needs in the communities.

“Local involvement has become one of the main responsibilities of our responding medical teams,” says Claudia Lodesani, specialist in infectious diseases and President of MSF Italia. “But approaching communities has become more difficult due to the troubles that occurred after elections in Beni and Butembo were postponed. People are even more reluctant to accept safety measures to prevent the spread of the virus, such as safe burials and decontamination in healthcare facilities and centers.”

“The risk now, after confirmed cases in a large city,” continues Lodesani, “is a faster propagation and a higher number of people exposed to contamination. In a large urban context, population density means a greater chance of coming into contact with the virus. Such as the case in Monrovia, Liberia, in 2014, when the Ebola outbreak exploded after it reached a big city.”

The epidemic, explains the President of MSF Italy, runs the risk of getting worse because it broke out in a war zone; an element that makes access to the population very difficult.

Given the situation, medical teams cannot move around freely and identify suspect cases.

“The outbreak has also spread to another border area where there is a lot of movement between the neighboring countries, South Sudan and Uganda. These countries have already registered cases of the virus. All neighboring countries have to adopt preventative measures and reinforce their healthcare systems. In order to contain the infection, it is important to have a clear idea of things that work and things that don’t work and implement intervention strategies through local involvement,” concludes Dr. Lodesani.

Since the declaration of the epidemic on August 1, 2018, the NGOs that responded to the emergency have increased their medical activities in relation to the growing number of confirmed cases. In the past few weeks, in particular, MSF has concentrated its response activities to the health zones of Butembo, Katwa and Komanda. It expanded the Ebola Treatment Center in Butembo from 64 to 96 beds, opened a new facility in Katwa, east of Butembo that holds 70 beds, and opened a transit unit in Komanda in the Ituri region, where new outbreaks were identified.

“With Ebola, treatment centers alone are not enough. Connecting with the communities and building mutual trust is key to getting the outbreak under control,” said Roberto Wright, MSF anthropologist in Katwa. “We need to increase our efforts to engage the population as active participants in the fight against the outbreak. This includes listening to their broader needs.”

At the end of December, MSF distributed trauma kits to local healthcare centers that responded to the outbursts of violence. Transit Centers not only identify Ebola patients and refer them for treatment, they also help ensure adequate care for other health issues.

“Visiting communities to present our activities before we actually launch them can go a long way in terms of improving mutual understanding and facilitating better collaboration in the long run,” said Wright.

Despite the commitment of international organization volunteers, the cases in Goma prove that the epidemic is spreading quickly.

This comes as no surprise to doctors who have been fighting the virus for months. It was only a matter of time. Preparations for an emergency Ebola outbreak in Goma began at the end of 2018, strengthening the epidemiological surveillance system and ensuring that it can provide adequate capacity to manage suspect cases.

The signs were clear: people kept dying in the communities, the number of healthcare workers rose and the spread of the disease was inevitable.

The Ministry of Health and WHO monitor the situation closely but a change is necessary. An effective response to the outbreak must become a priority in order to prevent an international epidemic.

Healthcare workers believe it’s important to take stock of what works and what is useless. In a situation in which finding and identifying contagion isn’t easy, not everyone who contracts the virus is reached.

In order to reduce the propagation of the disease, a large-scale approach and improved access to vaccination campaigns for the entire population are necessary.

Unfortunately, the instability of the Democratic Republic of the Congo makes operations difficult. In recent months, due to violent attacks against its facilities, MSF was forced to suspend activities in the Ebola Treatment Centers in Butembo and Katwa, making the situation much worse.

In the meantime, rising insecurities caused by presidential elections further restrict access to medical treatment in the Beni area where many healthcare facilities were damaged during protests in recent weeks.

All this rendered prompt identification of new cases even more complex. Within a few days, medical centers were already overcrowded.

“In this situation, people might have no other choice than to seek medical help in health facilities that do not have adequate triage or infection prevention and control measures in place, which makes the risk of contamination higher,” says Laurence Sailly, MSF emergency coordinator in Beni. “We are talking about a population that has endured many years of conflict. On top of that, they are now faced with the deadliest Ebola outbreak DRC has ever seen. The unrest of these past few weeks adds even more to their plight by limiting their chances of finding adequate medical care.”

The emergency is not limited to DCR and Rwanda. A strain of the infection has also developed in the district of Kasese, in Uganda, where on June 11 of this year, three suspect cases were diagnosed. An MSF team responded with Uganda healthcare officials to handle patients who may have the virus and/or show symptoms attributable to Ebola. Careful monitoring of the cases is necessary to confirm whether or not they have contracted Ebola.

International healthcare professionals are prepared to respond and handle new cases with an 8-bed treatment center in the Bwera hospital MSF helped build in August 2018.

The Ministry of Health in Uganda began local training programs for healthcare workers to assist patients with hemorrhagic fever, even during the response to an epidemic in Marbur, and to improve hygiene and infection control in the hospitals in Kagando and Bwera where confirmed Ebola cases were admitted for the first time.

The health crisis is rapidly worsening and doctors report that they are at risk daily because the working conditions are not adequate.

The World Health Organization stated they only had half the funds needed to face the epidemic, and the unrest in North Kivu, the epicenter of the outbreak, doesn’t help in the containment of the virus.

There are over a million displaced persons because of the conflict, most of whom are in neighboring Uganda and Rwanda. Border controls are regularly carried out, but according to WHO, the risk of the epidemic expanding beyond Africa is genuine.

The severity of what is happening contradicts with the indifference to places in which it is taking place. The donor countries who finance campaigns after natural disasters and humanitarian crises in “friendly” countries, don’t appear to be as responsive to an alarm that should not be underestimated. By anyone.