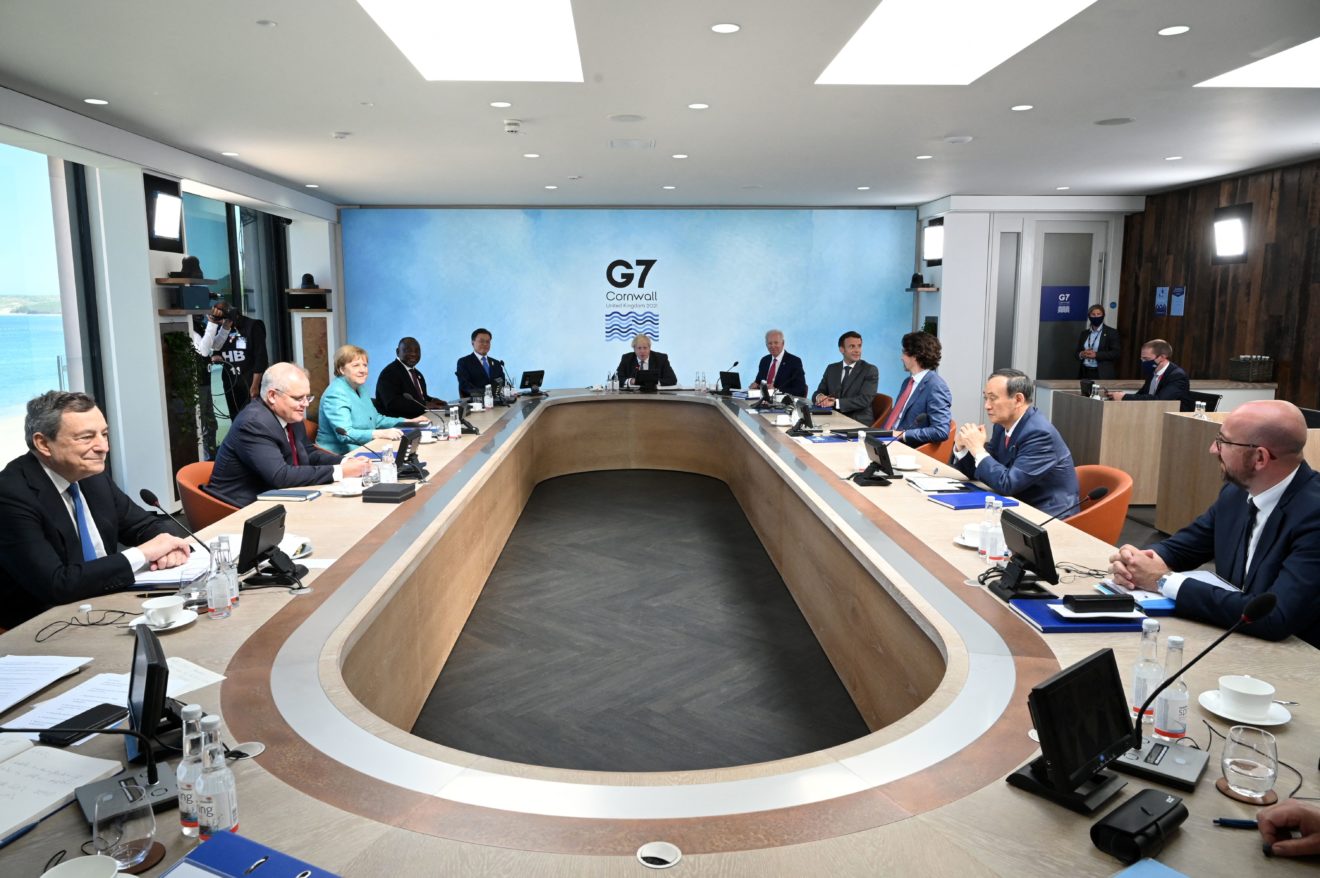 During the 2021 G7 Summit , the seven largest advanced economies in the world asked for an immediate ceasefire in Tigray, the withdrawal of Eritrean troops and a comprehensive and credible political process. They also expressly called for  unimpeded access for humanitarian organizations to save the population.

“We are deeply concerned by the ongoing conflict in Ethiopia’s Tigray region and reports of an unfolding major humanitarian tragedy, including potentially hundreds of thousands in famine conditions.” Reads a statement released after the G7 Summit.

The statement of concern of the seven richest and most powerful democracies in the world was released  shortly after the United Nations’ top humanitarian official, Mark Lowcock,  told Reuters, “Food is definitely being used as a weapon of war,” in Tigray where the Ethiopian army and its allies are fighting against the Tigray People’s Liberation Front (TPLF)

A report published this month by the Integrated Food Security Phase Classification (IPC) said that the United Nations warned that 5.5 million people in the region “face high levels of acute food insecurity” of which 353,000 are at the highest “catastrophe” phase. On Tuesday, the United Nations Security Council will discuss the crisis.

Hunger as a weapon of war joins ethnic cleansing, sexual violence, the destruction of economic, healthcare and education infrastructures, and the blatant attempt to erase the cultural identity of the Tigray by destroying monasteries, churches, monuments, and historical archives and by imposing Amharic culture and language. These are components that determine the definition of genocide that, last month, the Patriarch of Ethiopia’s Orthodox Church accused the government of.

Ethiopian and Eritrean armies have been accused of having deliberately blocked the supply of humanitarian aid to Tigray. Humanitarian organizations report that various foodstuffs intended for the population are stolen or confiscated by Eritrean and Ethiopian soldiers. The Prosperity Government denies the accusations stating that it is distributing assistance to restore order in the region. It also denies that there is a famine and it continues to state that the Eritrean troops have started to withdraw even though reliable news sources show an escalation of the presence of Eritrean troops that have spread to Oromia (circa 30,000 men) and to the borders with Sudan.

The mocking challenge of the Addis Ababa central government, based on denials and the alleged defence of national sovereignty, was launched by the Deputy Prime Minister and Minister of Foreign Affairs of Ethiopia the day before the leaders of the G7 discussed the “Ethiopia dossier”. An evident pre-empted diplomatic and media attack. The minister, Demeke Mekonnen, accused the group of rich countries of “a condescending approach” in favour of the TPLF and demanded they “desist from these unhelpful activities.” In a video statement, Demeke also accused unspecified members of the “international community” of “waging a campaign” against Ethiopia. According to him, the accusations of the government using hunger as a weapon of war were a blatant lie.

Even the declared intention of collaborating in a positive and constructive manner with partners to increase humanitarian aid and restore basic services in Tigray is bound by the interests of the nationalist Amhara top officials and by the dreams of power of a Nobel Prize laureate who is losing his leadership and gradually turning into an instrument  to impose policies of ethnic domination and territorial needs, and Afwerki’s revenge against his cousins in Tigray.

The demands made during the G7 Summit appear sensible and brought about by a firm will to stop this absurd civil war where the majority of victims are civilians.

Or so it would appear.

In reality, these demands could just become a way to clear their conscious, like Pontius Pilate, if they are not supported by concrete actions that end the continued organized and planned massacre of part of the Ethiopian population. The primary focus of the massacre is Tigray with branches in Oromia. We cannot fail to compare the (all but ignored) atrocities committed by the Ethiopian National Army and Eritrean soldiers against civilians in Tigray to the atrocities being committed in Oromia in the exact same fashion.

The message is clear. Whoever opposes the plans for Amhara ethnic domination and the ambitions of the Eritrean dictator, Isaias Afwerki, is subject to total repression. The mentality that leads to these actions is the imposition of domination by fire and sword: the same policies of the Amhara Emperors during the Solomonic dynasty upheld by Menelik I and Haile Selassie.

Equally clear is the desire of the Ethiopian Prime Minister and his allies/masters to ignore international appeals and to continue to resolve a political issue (which goes well beyond the clash with the TPLF in that it is a national issue not a regional one) through blind force and the complete repression of certain ethnic groups that are against centralizing state powers that would benefit Amhara domination.

Western powers are at an impasse. Their proposals for a peaceful resolution to the ongoing conflict in Ethiopia are being ignored. Insisting on humanitarian assistance in a context of general conflict could not only be misleading but also detrimental.

Even though necessary and commonly shared, humanitarian aid by UN and NGO agencies faces the risk of becoming an instrument used by the aggressors to “cure”  the more violent aspects of a conflict on a population without actually resolving the causes, and without stopping the criminals who have devised the aggression and are perpetuating crimes against humanity.

When all preventative measures to avoid a conflict fail, and faced with the clear intent of genocide, the international community cannot merely request demands based on principles or promote humanitarian aid. It must react, like it reacted in the nineteen forties against the Nazis.

The Nazi holocaust, the genocide in Bosnia perpetrated by Slobodan Milošević’s Serbian government, and the African holocaust in Rwanda in 1994 are predecessors of a moral obligation to intervene militarily against another country to stop genocide.

This principle was defined during the World Summit held in September 2005 to celebrate the 60th anniversary of the United Nations. During the event, in a section regarding international relations, a document was approved wherein  a fundamental principle determines the conditions of a military action that is morally and juridically justified in the presence of specific, structured and widespread violations of human rights within a country or in a specific geographical area.

This principle foresees the timely use, by both individual States and the international community, of any appropriate means to stop the systematic implementation of crimes against humanity, or worse, a premeditated genocide in the shortest time possible. Early interventions should use peaceful means but in the blatant absence of cooperation by the country accused of the crimes, military action cannot be excluded.

In short, the principle of justified military actions consists of a resolution that is aimed at protecting the world’s population from genocide, ethnic cleansing, war crimes and crimes against humanity in general. A military action should be triggered when a State cannot or will not protect its own population, or when it is the State itself committing the crimes. In these circumstances, the international community has the responsibility to intervene and take action to defend the human rights that have been violated.

This responsibility is intended to avoid the recurrence of the humanitarian disasters that took place in Bosnia, Rwanda, Kosovo and Somalia because international institutions have the responsibility of preventing and stopping these crimes against humanity.

Assuming that Abiy’s government allows open access to humanitarian organizations, this would become an instrument used by the Prime Minister and his regime to alleviate the suffering that he himself has caused, and to clean up his international image. Clever moves in view of a military victory which would be obtained with the use of chemical weapons as well. This is the case in Ethiopia.

Simply invoking access to humanitarian workers opens the door to the risk of refraining from the responsibility to protect the population as stated in the report by the Secretary-General of the UN on 21 March 2005 that authorizes a military action in any pursuit to end the freedom of living in dignity according to the most fundamental principles of “freedom from fear and from tyranny”.

A military intervention can take place in two ways. The first is characterized by an opposition force with a “full combat” mandate that separates the forces fighting in a conflict by imposing a ceasefire and forcing the two sides to negotiate peace agreements that are monitored and presided over by the international community acting as a super party arbitrator.

The second is characterized by an offensive against a warring faction or government that deliberately commits unilateral crimes against humanity or attempts to enact genocide. This intervention is taken in order to depose a government (and provide a subsequent trial) that has extended itself outside the limits of humanity in order to impose political domination with fire and sword. The second type of action was applied during the civil war in Yugoslavia in 1999 and in Libya in 2011.

Many people will object and say that any sort of military action could create a situation of extended conflict with the direct involvement of several regional and international powers, such as was the case in Syria. Let’s not forget that in addition to its direct allies (Afwerki and the Amhara fascist leaders), Ethiopia is protected by Russia, China, Turkey and the medieval monarchies of the Arabian peninsula; The United Arab emirates and Saudi Arabia.

The objection is fair and cannot be underestimated, but it creates a dilemma that is not easy to resolve. Is it better to intervene, knowing the risks that the conflict may expand, or to witness the completion of a genocide? Whatever the best solution to resolve this dilemma may be, one thing is clear: humanitarian access alone is not enough to stop a genocide and neither are appeals for peace and economic sanctions.

The use of force (gradual and controlled) is the only way to resolve a situation with a government that has deliberately placed itself outside international laws and moral codes. Once defeated, the leaders responsible for these crimes must undergo a trial and receive exemplary sentences as was the case with the Nazis at the Nuremberg Trials and the Hutu Power racial supremacy forces in Rwanda.

Insisting only on certain demands means agreeing with Minister Demeke Mekonnen who advised the international community to “desist from these unhelpful activities.”

NB: This analysis is purely personal and does not necessarily reflect the opinions of the news outlets with which I collaborate.