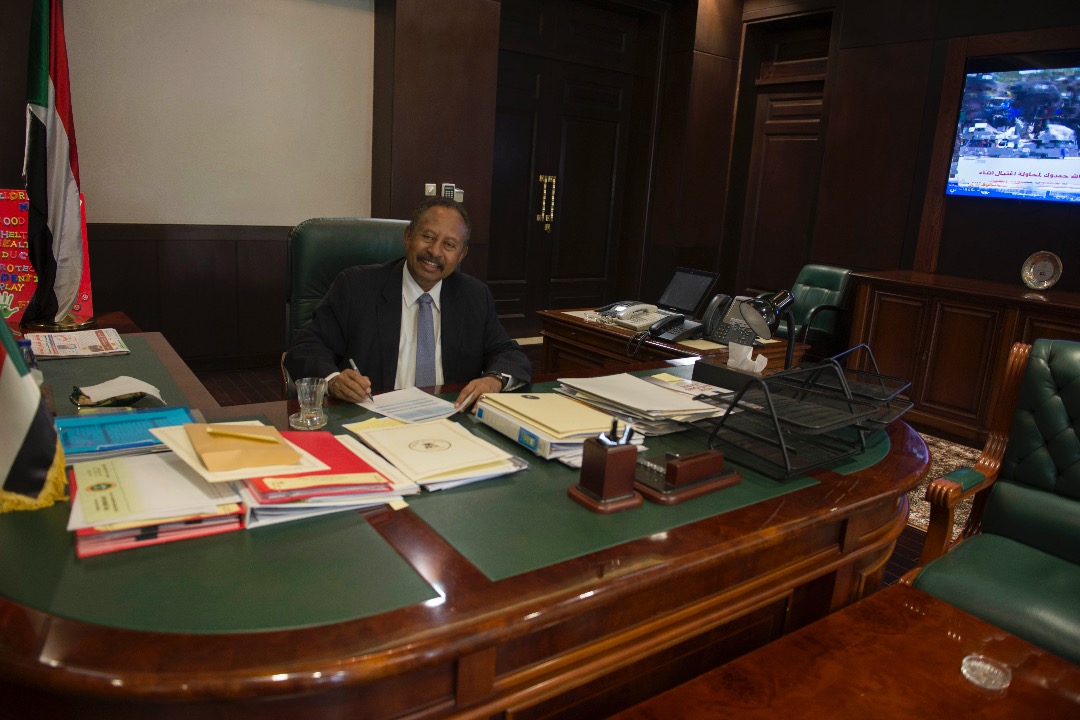 He wanted the people of Sudan to see him smiling and working at his desk after he had already reassured them via Twitter that he was fine shortly after an assassination attempt from which he emerged unscathed and in good shape.

“Rest assured that what happened today will not stand in the way of our transition, instead it is an additional push to the wheel of change in Sudan,” wrote the Prime Minister of Sudan, Abdalla Hamdok, on his official Twitter account.

The many Sudanese who believe in him responded en masse to his message, asking him to continue the reforms undertaken by his government. Since the internationally renowned economist was officially appointed last August, his government has been determined to complete the transitional phase that will end with an election in 2022.

Hamdok launched a nine-month plan to save the country from economic crisis and has received $2 billion USD from the World Bank to fund it.

One of the key points of the program presented by the Sudanese Ministry of Finance in early October, will see cuts to bread and fuel subsidies, one of the factors that triggered the protests that led to the fall of former President Omar Al-Bashir on 11 April 2019.

The distinguished Prime Minister of Sudan, who served on the United Nations Economic Commission for Africa (UNECA), decided to replace State subsidies on a large scale with direct cash transfers to poor families. A decision that provoked discontent in a large part of the population.

Hamdok has repeatedly emphasized that his government’s priority is to stabilize the Sudanese economy.

Not an easy task.

Raising issues of an economy in profound crisis with a daunting debt, has turned out to be quite a challenge. Almost as difficult as ending the internal conflicts after months of protests, without precedent, that forced former President Omar Hassan al Bashir to resign after more than 30 years in office.

The Prime Minister selected the members of his government from a list of names put forward by the Forces of Freedom and Change, the coalition that gathered together various protest movements.

Among the 49 candidates proposed, 14 independents were chosen to hold the posts of Ministers in as many departments. Many important ministries were entrusted to civilians, but the strategic Ministries of the Interior and Defense remained solidly in the hands of the military.

Along with the majority of the Sovereignty Council, the organism that shares government seats during the transitional period are members from the former military junta (Transitional Military Council) that took power in April 2019.

When there are important changes in a country due to military intervention, control of the armed forces is a crucial issue.

The path towards democracy in Sudan so far has been a minefield upon which even Islamic forces have played a role and “led” the fate of Sudan.

Working within a state apparatus in which 80% of the officials were nominated by Bashir, and changing things, was a tough game to play from the start. Sudan is a country that, since 1989, has been under the yoke of a dictator who practically destroyed the country and drove horrific “matches”, such as Darfur.

The power of the Sovereignty Council must not be underestimated either. It is chaired by General Abdel Fattah al Burhan, and the deputy chairman is Mohamed Hamdan Dagalo, known as “Hemetti”, the man who led the paramilitary army for years; the infamous Rapid Support Forces composed of Janjaweed militia, “devils on horseback”.

This same rebel group was involved in the shootout with armed forces outside the Directorate of Intelligence Services of Sudan following the announcement that the Prime Minister had decided to disband the structure. The shootout took place when government forces tried to disperse sit-ins held by the paramilitary who opposed the presidential decree to dissolve it. The first to protest against the government were members of the “Operations Authority” unit of the National Intelligence Security Service, that had about 14,000 active personnel.

It was the strong arm of Sudanese security forces.

Therefore, it cannot be ruled out that behind today’s assassination attempt, from which Hamdok narrowly escaped, there is someone who did not take his government provision very well.

There has been no shortage of clashes between the old establishment and the new Prime Minister on many issues during the first seven months of the transitional government, including the possibility of handing over former dictator Bashir to the International Criminal Court.

However, the fulcrum of the disagreements is the economic management of the country. The generals don’t want to give up control of it nor the military’s “income”, used to manage business and exchange with other countries.

Dagalo, responsible for the brutal massacre to disperse protesters outside military headquarters in Khartoum on 3 June 2019 which caused hundreds of victims, continues to influence the military used by Sudan in conflicts that involve longtime allies of Khartoum, from Libya to Yemen.

Last, but not least, in order to understand what lurks in the shadows of the government buildings in Khartoum, it is essential to keep in mind the investigations, demanded personally by the Prime Minister, into money-laundering, arms trafficking, and other illegal activities carried out by politicians and the army.

In short, the list of who would like to see the prime Minister of Sudan dead is well-nourished. Looking at all the “evidence”, it is easy to predict that what happened today will not remain an isolated “hostile act”.