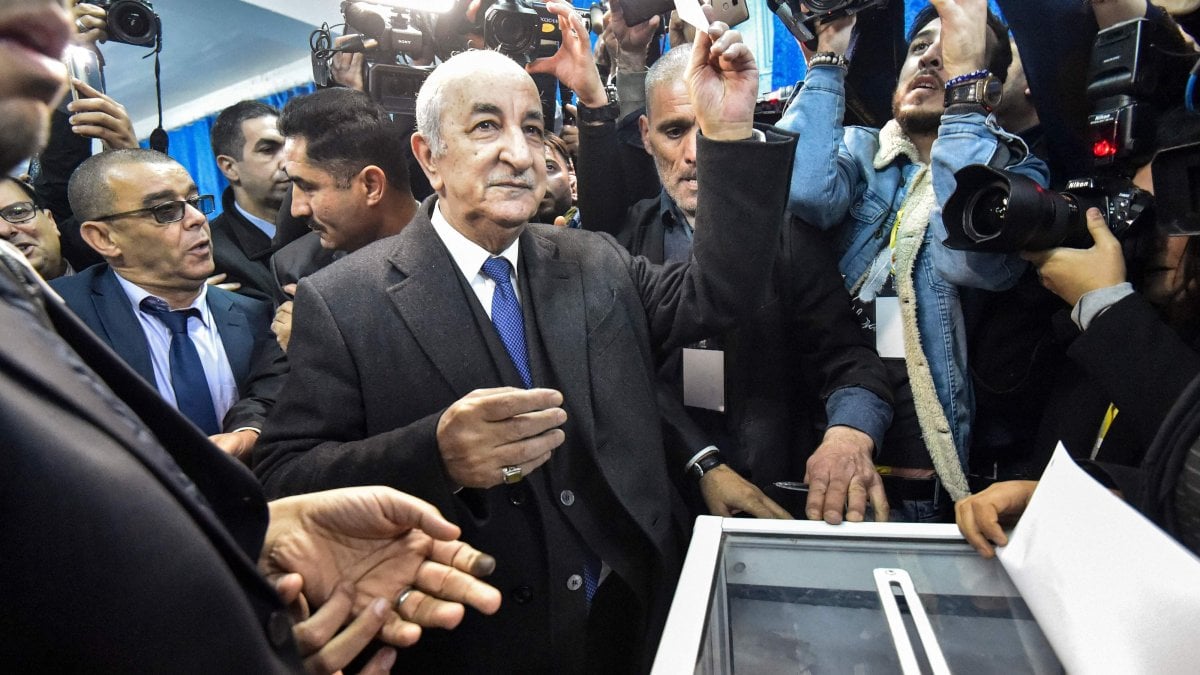 “I extend my hand to the Hirak for a dialogue towards peace-keeping in a new Algeria.” In his first news conference, the president-elect of Algeria, Abdelmadjid Tebboune, gives us an idea of the fear of how the failed agreement with the movement that boycotted the presidential elections in Algeria can affect his mandate. People took to the streets in a massive protest against the recent presidential elections undeniably proving that a sword of Damocles is hanging over the former Prime Minister’s head. Tebboune has ties with the same establishment the population has been protesting against for months. A human tide has been challenging the results for days. According to protesters, the mandate secures power to representatives of the corrupt, non-transparent, inefficient government formed by Abdelaziz Bouteflika who was ousted in April after serving as president for 20 years.

Former Prime Minister and Minister of Communications during the deposed president’s first government, Tebboune, 74 years old, won the elections in Algeria as an independent candidate.

Of the five candidates, Tebboune is particularly close to Chief of Staff and Deputy Minister of Defense Ahmed Gaid Salah, Algeria’s strongman.

Tebboune once served as Prime Minister for the briefest period in the history of Algeria; two months and 21 days. He was dismissed from office because of the then president’s brother, Said Bouteflika, and became Minister of Housing supervising the construction of the controversial Great Mosque of Algiers that was entrusted to a Chinese construction company.

Taking advantage of the President’s trust and, according to analysts, encouraged by Gaid Salah, the former Prime Minister decided to drastically reduce imports, over 40 billion dollars a year, in response to the fall in oil and gas revenues that was putting a strain on the country’s resources. He stated that he wanted to go after the new oligarchs and limit the weight they had within the regime and declaring that he intended on “separating money from politics.”

Tebboune received his degree at the National School of Administration in 1969 and served as wali (prefect) and minister a number of times. Tebboune somewhat incarnates old school state bureaucracy whose power was weakened due to the rise of Algerian capitalism.

His “arch enemy” Ali Haddad, President of the Algerian Business Leaders Forum (FCE), is close to Said Bouteflika. There have been numerous schisms between the two, such as in December 2016 when the ministers decided to boycott an “Algerian-African investment forum” prepared by the government but run by Haddad. On 5 July 2017, they had a “face-off” where Tebboune, Prime Minister at the time, told Haddad he could not participate at a ceremony held at the Ministry of Labor. A few days later, he sent his construction company, the leading company in the private sector, formal notices regarding delays in the execution of a number of projects.

On 30 July, Said Bouteflika responded by publicly humiliating Tebboune at the El Alia cemetery during the funeral services for the former head of government, Redha Malek. Eloquent images of Bouteflika with Ali Haddad by his side ignoring the Prime Minister were broadcast. The nightly news editions aired the scene and got the message across to Algerians that the “ruler” was renouncing Tebboune. On 15 August 2017, the Prime minister was fired and replaced by Ahmed Ouyahia but Tebboune gained some popularity as the oligarch hunter. However, after he was dismissed, he confirmed his loyalty to Bouteflika assuring his support for his fifth mandate.

But Tebboune is not exactly squeaky clean. His son Khaled is in pre-trial detention for suspected money laundering in the Kamel Chikhi, aka ‘El Bouchi’ (The Butcher), case. Chikhi has been associated with a record-topping seizure of cocaine, 700 kg, by port authorities in Oran in 2018. The case led to a number of arrests within the higher echelons of the army.

Recently, right in the middle of the presidential campaign, a relative of Tebboune’s, business man Omar
Alilat, was arrested and charged with corruption.

In explaining why he decided to run for President, Tebboune said he, “wanted to participate in the recovery of the country. With 50 years of experience in the government, I think I have the necessary means to resolve the fundamental problems and remedy the moral, economic, political, cultural and generational crisis.”