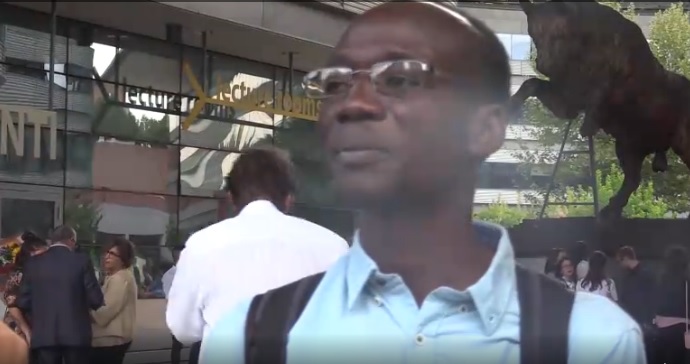 When he left his village in Darfur, he was in his early twenties. He was from the southern region of Sudan where he left his family, or rather what was left of it after years of conflict and the humanitarian crisis that struck two and a half million people. He began the long journey that brought him to Libya and it took until 2011 to land on the shores of Lampedusa.

He was without documents, desperate. Today Ahmed Musa was awarded his degree at the university of Turin with a dissertation on human rights in Darfur, where he is from and where he was incarcerated, deprived of his nationality and tortured and where his father and six siblings were killed. He spent his first days in Turin sleeping in the Porta Nuova train station.

Musa now lives in the university dorms and is going to continue his studies to get his PhD. He has refugee status and a small child he named Nelson Mandela.

Ahmed, 32, was born in the town of Entkena in Sudan. He escaped prison because he was left for dead and abandoned in a field where farmers found and helped him. It took him five years to reach Italy, three of which were spent in Libya. Before pro-government militia attacked his city, he had received a degree in Economics in Khartoum where he taught and married a co-worker who is currently a refugee in Norway.

“Studying,” says Musa as he waits to discuss his dissertation, along with his thesis advisor Valentina Pazé,  “is a way to prove that no one can destroy the will of another person. Through studying, my parents taught me, you can change your life and that of others. This is why I made this choice. It was difficult but I am very happy here. I escaped from a war and now I am a normal person.”

“Through studying,” he adds, “I try to give my contribution to improve that which surrounds me. My role model is Mandela. I want to be like him and work to bring peace everywhere, not only in Darfur. I am an active member  of the community and I would like to continue my studies, get my PhD and then be a professor in order to teach how human rights must be respected.”

“I would like to stay in Italy,” he says. “I feel at home here. So much so that when I visit my wife in Norway I leave with luggage filled with pasta, pesto and coffee.”

His thesis: Human rights in Darfur, addresses one of the least studied wars. The conditions of chaos and violence in the area are indeed so terrible to make empirical research impossible. The dissertation committee emphasized that the thesis takes on an important value even as testimony.

The dissertation was written in English and defended in Italian. It received 90/100. What emerges is the scene of a genocide carried out to achieve ethnic cleansing against non-Arab populations.