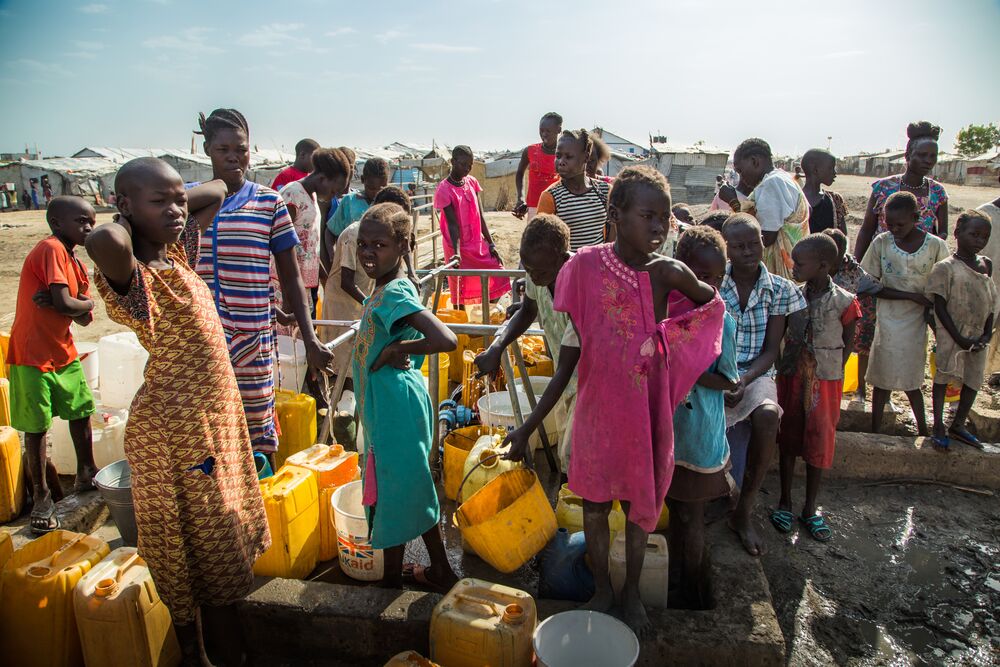 Nine months after an agreement signed between the parties at war in South Sudan, the future is still uncertain for about 180,000 displaced persons who live in Protection of Civilians (PoC) sites operated by the United Nations Mission in South Sudan (UNMISS) and built to receive thousands of displaced persons in search of safety. In Bentiu and Malakal, where the largest sites are located for the number of people they receive, Medici Senza Frontiere (MSF) treat the effects of the difficult living conditions: the lack of security, insufficient access to food and water, and inadequate shelter.

MSF has been asking to improve conditions within the camps for some time, especially access to water and better sanitation. The latrines in the Bentiu center where 100,000 people live, overflow with liquids that stream down to where children often play. This is one of the reasons why almost half of the patients at the MSF 160-bed hospital in Bentiu are children under five years old who arrive with acute diarrhea, skin disease, eye infections and worms; illnesses that can be avoided by improving sanitation and the quality of the water.

“The lodgings are obtained by combining several tents. If a person in the first tent has tuberculosis, it is very likely that he will infect the other occupants. Without the means to separate them, the risk of infection is high,” states Peter who has lived in the Bentiu Center for five years with his five children even though he comes from the nearby town of Rubkona.

In Malakal, which was the second most populated city before the war and one of the hardest hit by the conflict, MSF also runs a hospital in the PoC Center where about 30,000 people live. In 2018, 51 people (1 person a week) were treated after attempting suicide, and over 2,400 mental-health consultations were provided, both individual and group, by MSF staff.

“Many of these people have experienced traumatic events during the war, such as the loss of a family member or their homes. Many witnessed violence and were forced to flee. These events, together with the precarious living conditions, trigger symptoms of psychosis. Some of our patients have attempted suicide and suffer from deep depression. Resignation is a widespread symptom among the entire population at the Malakal center,” states Carlos Alberto Meza, Head of Mental Health Activities for MSF

The two Protection of Civilians sites were created to protect people from the violence that hit South Sudan, but security within the sites is not absolute: robberies, looting and sexual violence are frequent.

“The life for everyone, but especially for women, is very difficult. These five years have affected people. They are unhappy, they lost many things when they had to flee their homes, and there have been so many deaths in the community. Some people are mentally ill and even say it would be better to kill themselves,” says Achol (in the photo), a 32-year-old woman who comes from Obai, a village south of Malakal.

For those who have a job, the risk of being attacked is even higher.

“Even me, because I have a job, we are the most targeted people in the PoC. Where can I run though? We don’t have the choice to leave, it’s still better than outside.” says David, one of MSF’s health promotion staff that lives in one of the PoCs.

Despite the countless difficulties, many people still have hope for a better future.

“If we witness it, the peace, then we can go outside. If not, better to be here, but what I want to add is that all the women from South Sudan, all the people of South Sudan, hope for peace. If there will be peace, that will be nice,” says Teresa.

Tens of thousands of people have died in South Sudan and an average of one person in three has been forced to leave their home since the war began in December 2013. Two million people fled to neighboring countries, while a further two million people are internally displaced. One of the most important MSF missions in the world is being carried out here.

MSF runs basic and second-level healthcare programs in hospitals and clinics, carries out awareness-raising activities for displaced persons and remote communities, responds to emergencies and epidemics, and provides preventative activities such as vaccination campaigns.