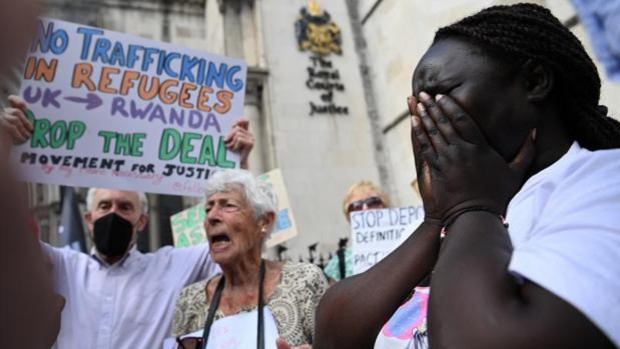 On Tuesday morning, from the Colnbrook immigration center seven migrants from Albania, Vietnam, Iran and Iraq were escorted to the Boscombe Down airbase airport to be deported to Rwanda under a pact signed between the two countries where Rwanda pledges to welcome all unwanted migrants from Boris Johnson’s government under a lavish reward.

In the previous days, the objections to the high court and the court of appeal that raised general points on the lawfulness of the deportations had been lost. The deportees were to be transported to Rwanda by a Spanish airline, Privilege Style. Following the protests, the government decided to board them on a military plane at the Boscombe Down air base. One of the deportees, of Albanian nationality, injured himself in an attempt to prevent deportation. With inhuman ruthlessness, the British military summarily medicated him and boarded him like a beast on a military plane. An Iraqi fainted when he boarded but was taken on board anyway where he received brief and hasty medical assistance.

A large group of human rights activists gathered in front of the military base to prevent deportations by infuriating the Ministry of the Interior. The police had been ordered to disperse the demonstrators by force. Order withdrawn at the last minute due to the large presence of the national media.

A coalition of human rights charities – Care4Calais, Detention Action, and Public and Commercial Services Union – had requested a flight injunction days earlier, but the request was denied by a high court judge on Friday. The court said there was a “material public interest” in allowing Interior Minister Priti Patel, the daughter of Indian migrants from Uganda who arrived in the UK in the 1960s, to implement immigration control measures.

The deportation was overturned following the European Court of Human Rights (ECHR) ruling that human rights lawyers Duncan Lewis had contacted about their client, a 54-year-old Iraqi who had arrived in Britain with a small child. boat less than a month ago and was on the list of deportees. A provisional sentence has ordered the British government to stop the deportations as there are strong doubts about the conditions for the deportees to Rwanda. The ECHR has no jurisdiction over Great Britain after leaving the European Union, but the British High Court deemed it appropriate to support the decision of the ECHR in order not to worsen the country’s already compromised image on this treaty called a modern slave trade.

In April 2022, a partnership for migration and economic development was agreed between the UK and Rwanda. It allows the UK to send some people to Rwanda who would otherwise seek asylum in the UK. London has committed to pay Rwanda 120 million pounds for the service rendered.

On June 10, the High Court considered a petition for an urgent interim injunction to prevent any transfers to Rwanda from being made before a related judicial review of the policy can be heard. This briefing provides an overview of the asylum agreement between the UK and Rwanda, related legal issues and areas of dispute, and the role of Parliament in examining it.

On the eve of the deportations, the archbishops of Canterbury and York together with 23 bishops of the Church of England published an open letter to the government condemning the deportations and the agreement stipulated with Rwanda calling it an immoral policy that brought discredit on the honor of Great Britain . The letter was published in The Times, dealing a severe blow to the London government as the Church of England has a huge influence on the country’s domestic politics and among British public opinion. days earlier, the Archbishop of Canterbury had declared the UK Rwanda agreement “sacrilegious”.

The Holy Father spoke on the subject on Saturday 11 June. Pope Francis has decided to raise his voice against the British government procedures for the repatriation of migrants, including among these also those entitled to humanitarian protection and those who have already obtained English citizenship which can be revoked with the new law.

The Pope’s position was taken seriously by the Rwandan government as Pope Francis in 2013, during the historic meeting with President Paul Kagame, relaunched relations between the Vatican, the Catholic Church and Rwanda, admitting for the first time the heavy responsibility and the shameful participation of the Catholic Church in the genocide of the Tutsis which took place in 1994. About 200,000 people were killed thanks to priests and cardinals and bishops who had lured them into churches by promising them protection and then handing them over to the genocidal militias. At least 12 churches were the scene of horrendous crimes with thousands of Tutsi faithful slaughtered inside.

In 2013 Pope Francis imposed a new policy based on reconciliation, peace and collaboration between the countries and populations of the Great Lakes Region aimed at avoiding a second genocide. To impose the new course of the Vatican, the Holy Father had to marginalize and call to obedience various elements of the Congolese clergy and Italian and Belgian missionaries who in the region continued to support the Rwandan genocidal forces and the terrorist group FDLR by promoting a subtle but effective campaign against Rwanda and the Tutsi ethnic group.

To strengthen his forward-looking regional peace policy, Pope Francis supported Congolese President Felix Tshisekedi who was aligned with the integration of the countries and peoples of the Great Lakes. Unfortunately Tshisekedi in recent weeks has been sidelined by the Generals, exponents of Congolese civil society and by the Rwandan FDLR terrorists who want a war against Rwanda. On Tuesday in Goma, the capital of North Kivu province, the hunt for Tutsis began after Congolese civil society in agreement with FDLR terrorists unleashed an angry mob of desperate people against Rwanda, the Rwandan citizens present in the city and the Tutsi minority. Congolese. The provisional toll speaks of 18 victims including women and children.

Many are also rightly shocked by the agreement with Rwanda. About 160 charities and news groups described him as “shamefully cruel”. A quick poll showed that voters are against the project. The president of the Law Society of England and Wales questioned its compliance with international law.

The United Nations High Commissioner for Refugees (UNHCR) has made a rare intervention in publicly opposing the asylum policy of the UK and Rwanda. “People fleeing wars, conflicts and persecutions deserve compassion and empathy. They should not be traded as commodities and moved overseas for processing, “the body said in a statement.

Prominent figures, including Prince Charles, UN refugee chief Philip Grandi, and the entire leadership of the Church of England have condemned the plans. The Prince of Wales privately described the policy as “appalling,” according to the London Times, a significant assessment by the heir to the British throne that he should maintain political neutrality.

Boris Johnson’s government, covered in scandals and guilty of shameful participation in the war in Ukraine by sending weapons and soldiers passed off as mercenaries fighting the Russians alongside the Nazi militias in Kiev, continues to defend the slave trade with Rwanda . At stake was the political reputation of Prime Minister Boris and Priti Patel, who had previously claimed that this would be the future for thousands of people who claim to have come to the UK to seek refuge. The Tories say sending asylum seekers to Rwanda will help reduce the number of people arriving in the UK on small boats across the Channel.

Rwanda also defends the infamous agreement. In previous weeks, the government has commissioned international media agencies to paint a bright future for the incoming deportees. He even committed the crime of displacing Tutsi orphans of the 1994 genocide from a hotel to turn it into a reception center for deportees. An act that shocked Rwandan public opinion.

I make a personal appeal to His Excellency the President of Rwanda, Paul Kagame.

You fought for the liberation of your people from the Nazi horror of HutuPower ethnic domination, managing to stop the genocide and transform a poor devastated country into a great nation in economic growth where ethnic divisions have been abolished and the rule of law established. You represented and still represent the new political course of Africa that fights the tyranny of dictators and tribal and ethnic ideologies.

By virtue of his work and to honor him, it is appropriate that during the Commonwealth meeting that is taking place in Kigali, he announces the recession of the infamous migration agreement with Great Britain.

An obligatory gesture to make us understand that the ideals of peace, justice and freedom for which she fought in her youth, risking her life personally, are still alive and respected.

A gesture of high symbolic value and of justice necessary in this difficult moment that your country is crossing, threatened by the genocidal terrorist forces that have settled in neighboring Congo and Burundi and are determined to carry out a second genocide of Tutsis in Rwanda.