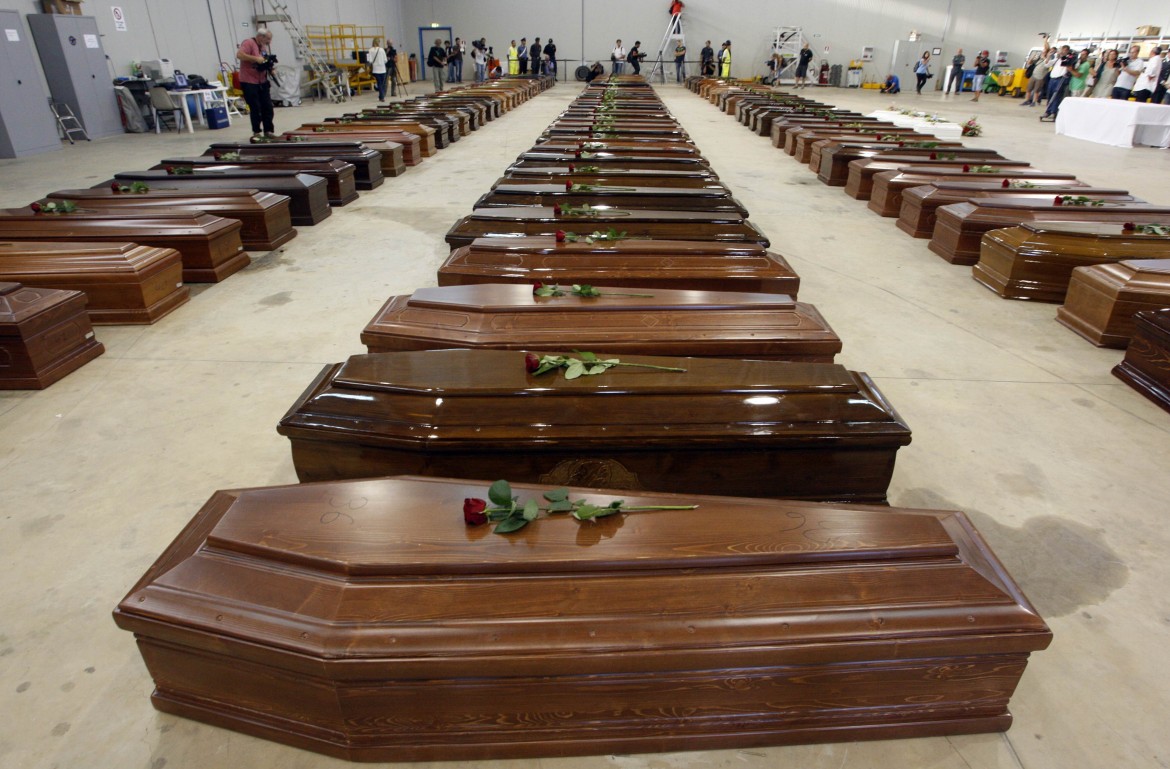 October 3 is a date for remembrance of and, above all, to remind us of the accountabilities of tragedies like the shipwreck off Lampedusa six years ago in which 368 Eritreans drowned.

The expanse of bodies, including dozens of children, that Giusi Nicolini, mayor of the island at the time, defined “a carpet of human flesh”.

Since 2016, on 3 October, Italy commemorates the National Day in Remembrance of the Victims of Immigration.

If remembrance is due, more so is to reflect upon and admit that not much has changed since that fatal 3 October.

Europe has failed. Six years have passed since the tragic shipwreck near the coast of the Island of Lampedusa where 368 people died. Six years since “never again” was promised but has been disregarded time and time again.

The images of the coffins lined up one after another, many smaller white ones, in a military hangar, are still sharp in our memory. An undying memory because it’s impossible to forget.

In reaction to the tragedy, Italy created Operation Mare Nostrum that saved many lives. Over 170,000 in one year.

But in October 2014, the operation was suspended because Europe didn’t want to take on certain responsibilities and didn’t want to consider the Mediterranean as “only” a European Sea.

Thus Triton was established. An operation focused primarily on monitoring and discouraging the arrival of migrants rather than providing rescue.

Since then, a further 170,000 shipwrecked people have been rescued by Italian and other European ships but mostly by privately-owned boats and those owned by non-governmental organizations such as Medici Senza Frontiere.

Policies opposing NGOs began, but they continued to save lives nonetheless.

There are many, too many, corpses that still wash up upon our shores or end up at the bottom of the sea along with the precarious vessels on which they climbed aboard on a journey of hope that rarely ended in a safe port.

To date, since the shipwreck that shook an entire continent, there have been 20,000 victims and the Mediterranean has become an infinite cemetery.

The Day of Remembrance has one genuine aim; to preserve and refresh our memory about how many people lost their lives while trying to emigrate to our and other countries to escape war, persecution and poverty.

But a simple “commemoration” isn’t enough.

Much more is needed to engage the Member States to rise to the challenge of migrations, to safeguard the life and dignity of people fleeing their countries. Men, women, and children who are looking for nothing more than a chance for survival.

This year alone, there have been over 1000 people lost at sea in addition to the 700 confirmed deaths. And 2019 isn’t over yet.

As stated by Filippo Grandi, the United Nations High Commissioner for Refugees, in the past 10 months, over 300,000 people crossed the Mediterranean Sea, 28% of which were children, many of which unaccompanied by or separated from their families.

Legal and protection policies exist and should be implemented: family reunification, resettlement, humanitarian corridors, study and work visas. Concrete possibilities so that people fleeing from wars, violence and persecution can arrive at a safe place without undertaking dangerous, life-threatening journeys as even UNHCR spokesperson Carlotta Sami stressed.

We repeat, 3 October should not be just a day to remember the tragedy at Lampedusa but rather a time for reflection and condemnation so that the accountability of those who created the conditions for such tragedies is clear. We cannot accept indifference.

The European Union has as yet failed to establish new common policies on political asylum and immigration. The European Commission’s half-hearted efforts to reform the Dublin Regulation and to introduce redistribution quotas for reception among Member States has not produce results. We are waiting to hear about the developments proposed at the meeting on immigration held in Malta last week.

Hope never dies, but I fear that the Visegrád Group block may restrain, or at least hinder, the proposed system. EU sources have already taken the Malta proposal apart: there are no real obligations. There is no mention of port rotation nor the distinction between economic migrants and refugees.

There is only one thing we are sure of: a “humane” solution to immigration is not a top priority for Europe.

It isn’t even an issue our own government is racking its brains about. It is, and will remain, “simply” a tragedy for the desperate people trying in vain to land on our shores in search of salvation from war, crisis and natural disasters.