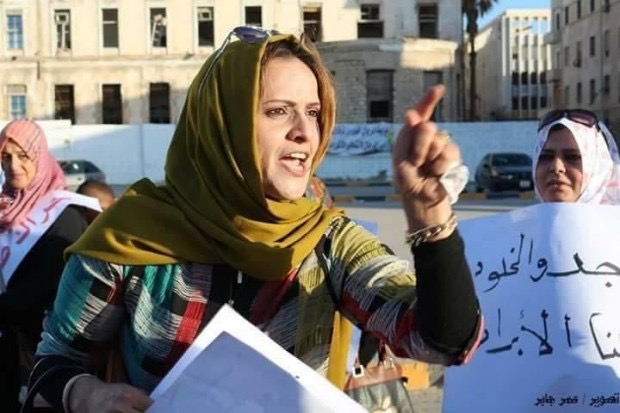 Gunmen in three vehicles barged down the main shopping street in Benghazi, Shara Ishreen (20th Street), and opened fire on Hanan Al-Baraasi shooting her in the head and then escaping. The assassination was executed by professional masked military forces in the middle of the crowded street. Al-Baraasi was taken to Al-Galaa Hospital  but was pronounced dead on arrival.

Hanan was a lawyer and activist for human rights who was a harsh critic of the Jihadists and the military officials imposed on the capital city in Eastern Libya. And she never bowed to them: she was very outspoken on Benghazi radio, TV, press and on social media. She had received death threats and her daughter escaped a kidnapping attempt.

She was assigned armed protection at her home.

Despite her support of the Libyan National Army (LNA) led by General Haftar against the Jihadists that had occupied Benghazi and Derna for many years, she had recently criticised Haftar’s son, Saddam, accusing him of having risen in the military ranks too rapidly, surpassing other officers with more merit. She also questioned the source of wealth of the General’s son and the head of one of the units in the LNA, hinting at kickbacks on military commissions.

The city of Benghazi and all of Libya is in mourning for a courageous woman who never pulled away in the name of the injustices that the Libyan society suffered and is undergoing at the hands of armed forces that hold impunity and are above the law.