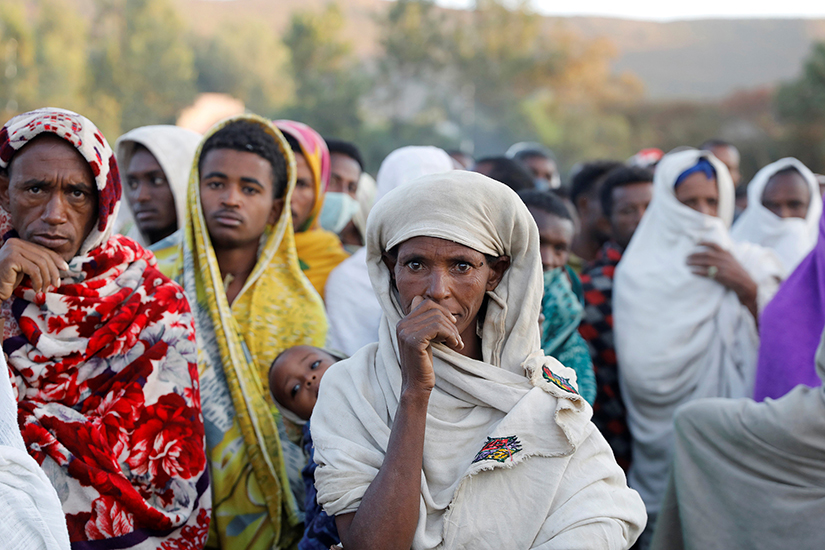 On Focus On Africa Magazine we denounced and reported testimonies regarding the arbitrary and mass arrests of Ethiopians of ethnic Tigrayans. Group arrests of Tigrayans of all ages, sexes, and social classes suspected of being dissidents, terrorists, partisans alongside the TPLF, labeled by the central government as a terrorist group in May 2021. The implementation in November 2021 of the national state of emergency has legitimized deportations and arbitrary detentions in many cases in unknown places. The police forces have the power to decide the fate and timing of the arrest.

The arrests for the modalities implemented were declared, not only by Amnesty and HRW – Human Rights Watch, but also by the United Nations itself, as harmful to human and individual rights. The repression on Tigrayans was seen right from the start of the war in November 2020: dismissals from jobs, dismissal and arrest of thousands of military units, including high-ranking ones, within the federal army because ethnic Tigrinya, blocked current accounts.

These activities were legitimized as the governmental will of the pursuit of national security: the modalities, however, immediately had repressive connotations.

To date, it is estimated that more than 30,000 Tigrayans have been arrested in the Addis Ababa area. Indiscretions have leaked news that some thousands have not reached the point of detention as executed: the hope is that the recent decision to establish an independent investigative commission by the UN Human Rights Council will soon shed some light on this too. context: the more time passes, the more there is the risk that refutations will become difficult if not impossible to carry out. In the rest of Ethiopia, no information was leaked. Regarding the publication and sharing of information, the national media have constraints dictated by the government in a state of emergency for a total of six months starting from November 2021: in this context, the danger of a biased or better propaganda narrative is palpable.

Precisely for this reason, what will follow is an interview with a person who wants to try to give justice and a voice to those who have no voice: Desta Haileselassie Hagos.

We ask him directly to introduce himself and let us understand the work he has been doing for a year.

Desta Haileselassie Hagos, an ethnic Tigrayan, is a Postdoctoral research fellow at the KTH Royal Institute of Technologoy in Stockholm, Sweden. Desta has been compiling the list of civilian victims of the genocidal war on Tigray for more than a year now. The list of verified civilian victims compiled so far can be found at Tghat Media, https://www.tghat.com/victim-list/.

In introducing this article, we tried to give insight into the situation and context in which Tigrayans live today in Addis Ababa and in the rest of Ethiopia. Do you have anything you would like to correct or add?

What is happening to ethnic Tigrayans in Addis Ababa and the rest of Ethiopia is an extension of the genocidal war on Tigray. The arbitrary mass arrest of ethnic Tigrayans in concentration camps everywhere in Ethiopia, shutting down businesses owned by Tigrayans without any legal notice, ethnic profiling of Tigrayans, ethnic cleansing of Tigrayans from the western part of Tigray by the Amhara militia and Fano etc. has been widely reported by the international media outlets, human rights organizations, and state department of the United States of America (USA). The situation is getting worse from day to day. Hundreds of thousands of ethnic Tigrayans are believed to have been arbitrarily detained across many detention centers in Ethiopia without any criminal charges.

Regarding the list and the estimates on the amount of Tigrinya killed, can you give us some more details?

Given the total communication blackout in Tigray, it is not easy for me to statistically state the actual number of Tigrayan civilians killed over the past 14 months. A joint press release by three Tigrayan political parties on 02 February 2021, however, revealed that an estimated 52, 000 Tigrayan civilians had been killed from November 2020 to January 2021. Since then several well-researched and exceedingly credible reports by the international media and human rights organizations have detailed atrocity crimes committed in Tigray by the invading forces including dozens of documented massacres of unarmed civilians. Taking this pattern into account, you can imagine the number of casualties over the course of the war. At Tghat Media, we have managed to compile 3136 civilian victims. The actual list of casualties we have collected so far is about 5.96% of the estimate of civilians killed arrived at by the three Tigrayan political parties in February 2021. For more details, you can refer to an article we published in August 2021.

Regarding the arrests of the Tegaru, those who follow you on social networks know that you share updates. You recently reported in the Humera area a group arrest between women and men, transported by truck to unspecified destinations. Can you tell us about it?

Yes, according to reliable sources we spoke with on 18 December 2021 on the ground in Humera, the Amhara militias and Fano transported Two ISUZU trucks full of Tigrayan women detainees and four ISUZU trucks full of Tigrayan men detainees from Humera to unknown locations on 17 December 2021. Their exact whereabouts is not known yet. This is as part of the ongoing ethnic cleansing project of the Western part of Tigray.

Have you had any testimonies about the life of the Tegaru inside the concentration camps?

The danger of these concentration camps, in addition to the detention methods that harm human and individual rights, are potentially dangerous for the very lives of the arrested Tigrayans. There are those who hypothesize that they can be executed out of court. Several appeals have been made to the international community to warn them of a potential genocide. It is a heavy accusation: what do you think of this compared to the testimonies in your possession?

It is actually true according to my sources and crimes like these are being carried out in coordination with the Eritrean security agents.

There were also reports of men and women of the church arrested with the usual excuse of being suspected of supporting the TPLF. Some of them, however, for no justified reason, but only because they are of Tigrinya ethnicity: would you like to comment?

As I said earlier, what is happening to ethnic Tigrayans in the Amhara region and other parts of the country is an extension of the war on Tigray to exterminate Tigrayans. As a result of the ethnically motivated mass arrest of Tigrayans in Ethiopia, hundreds of Tigrayan Church scholars have also been detained without any crimes based on their ethnicity.

We thank Desta for the availability and the information shared.

On the subject of arbitrary arrests, yet another piece of news was received a few days ago. This time towards two Sisters of the Ursuline order, Sister Lemlem Ghiday Aigarer, Sister Birkti Gabray Halibo arrested in Kobo, Amhara, on 30 and 31 December 2021 and currently, 5 January 2021, would still be held in the Kobo prison. The two nuns have Tigrinya origins, the motive for the arrest is not clear, but the law of “suspicion” legitimized by the State of National Emergency applies, but by means of violation of human rights.

Ethiopian authorities also arrested Tigrayans deportees at checkpoints on roads to Tigray or at Semera airport in the Afar region and transferred them to detention facilities in Afar or southern Ethiopia.

“Tigray migrants who have suffered horrific abuse in Saudi custody are locked up in detention facilities upon return to Ethiopia,” said Nadia Hardman, a migrant and refugee rights researcher at Human Rights Watch. “Saudi Arabia should offer protection to Tigrayans at risk, while Ethiopia should release all Tigray deportees arbitrarily detained.”

There are various causes of emigration that has led thousands of Ethiopians to migrate in the last ten years, from economic difficulties, drought, to the violation of human rights: they emigrated to Saudi Arabia via the Red Sea and Yemen.

The Ethiopian government warned in January 2021 that it would cooperate in the repatriation of 40,000 Ethiopians, starting at 1,000 per week. 40% of the repatriations between November 2020 (start of the war in Tigray) and June 2021 were Tegaru, people of Tigrinya ethnicity.

Between mid-June and the end of July, deportations increased with over 30,000 deportees. The wave coincided with an increase in the profiling, detention and disappearance of Tigrayans by the authorities in Addis Ababa and later by the ENDF, the defense forces from the Tigray region and with the intensification of the conflict of the TDF – Tigray Defense Forces.

As reported in Addis Standard:

“Human Rights Watch interviewed 23 Tigers – 20 men and 3 women – who were expelled from Saudi Arabia between December 2020 and September 2021, with the majority deported between June and August 2021 and subsequently detained in Ethiopia between April and September. The deportees were held in facilities throughout Ethiopia: in the centers of Addis Ababa; in Semera, Afar region; in Shone, Southern Nations, Nationality and Region of Peoples; and in Jimma, in the Oromia region. Human Rights Watch has sent letters with questions to the Ethiopian National Commission for Disaster Risk Management, the Federal Police Commission, the Saudi Arabian Embassy in Washington, DC, the Saudi Human Rights Council, and the Ministry of the Interior. of Saudi Arabia, but received no response. “

In all this articulated and smoky context there are many unresolved questions and facts to be ascertained: it is not known what future each individual prisoner will have, if they are released, if they can have a regular trial. To date, unfortunately, all arrested Tigrayans, of all ages and social classes, live in limbo, between life and death in the silence of the rest of the world.

On Sunday 9 January, reports arrived that Eritrea had launched a heavy military attack on…