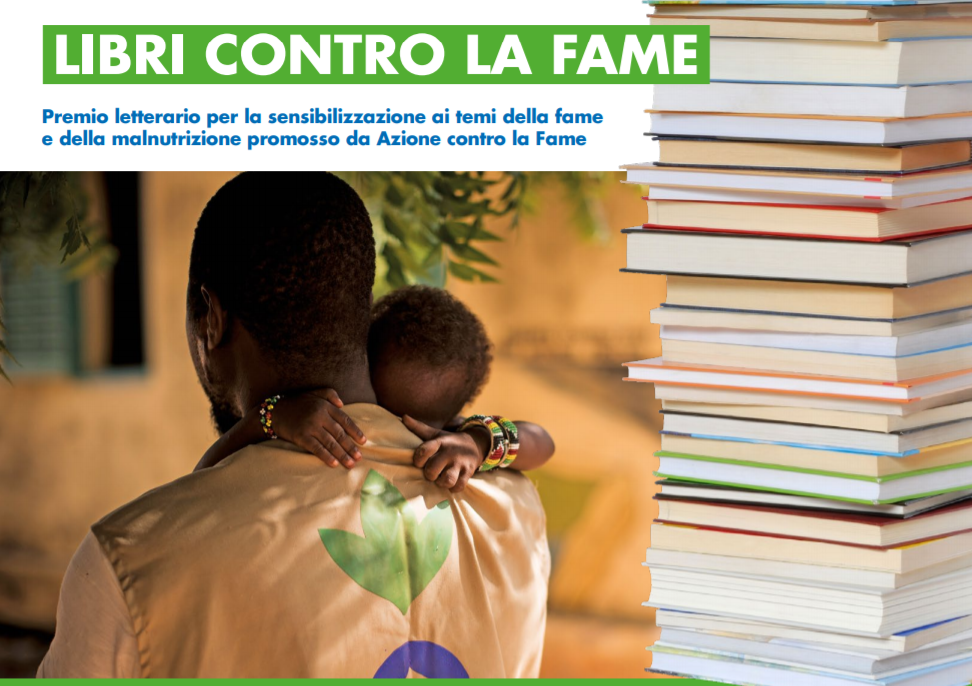 Senator Emma Bonino will close the first edition of the Libri contro la Fame (Books Against Hunger)  award, a literary contest promoted by Azione contro la Fame (ACF – Action Against Hunger Italy). The award ceremony will be broadcast on the organizations Facebook page and on the newspaper La Repubblica’s YouTube channel on Friday, November 13, at 3:00 pm as part of the Bookcity Milano events calendar. At 4:00 pm, the ceremony will be followed by press room dedicated to the contest on Zoom where you can meet writers and publishing company representatives (attached save the date with the links for access, ndr).

Action Against Hunger is a global humanitarian organization that takes decisive action against the causes and effects of hunger. We save the lives of malnourished children. We ensure everyone can access clean water, food, training and healthcare. We enable entire communities to be free from hunger. Last year alone, Action Against Hunger served more than 17 million people in 50 countries.

Its headquarters –in Italy, France, Germany, Spain, United Kingdom, Canada, the United States and India – are committed to keeping public awareness alive on hunger in the southern hemisphere. The scourge of hunger is a current event: in the past five years, the trend has been rising steadily. The structural causes are also current events: suffice it to mention conflict, climate change and economic, social inequality and now even COVID-19 can trigger a new global hunger emergency.

According to the Global Nutrition Report 2020, almost 690 million people are currently malnourished  (+60 million in the past five years). If the numbers continue to rise, about 840 million people will suffer from malnutrition by 2030 (SOFI). In this scenario, dramatic in itself, a further theme is inserted, it is called “future”. 5.2 million children under five years of age died last year from illnesses that could have been prevented including those caused by malnutrition (UNICEF): hunger and undernourishment, in particular, contribute to approximately half of global infant deaths (45%, 2.3 million children).

In its first year, the literary competition Books Against Hunger, was promoted and encouraged by the [Italian office] of the organization with a view to raising awareness on hunger and malnutrition. These two scourges. that will also be aggravated by the effects of the pandemic – both in health and social character –  could lead a further 132 million people to suffer from hunger.

The project wants to highlight the central role culture has in this great battle: the same culture that, in the 1970s through the works of Françoise Giroud, Bernard Henri Lévy, Marek Halter, Alfred Kastler (Nobel Prize for Physics), Guy Sorman and Jacques Attali, established the creation in France of Action Against Hunger. The organization repeats the message that the world, today, is equipped with the necessary knowledge to prevent and cure malnutrition with efficient, low-cost solutions. But, at the same time, it is necessary to be aware of the scale of the phenomenon and formulate clear policies that are in line with the Sustainable Development Goal, Zero Hunger. Hunger is created by man and he himself can end it: in this respect, culture and raising awareness play a very important role today.

In this spirit, the awards ceremony will be preceded by a Web Talk on the issue “Where there is culture, you can eat. And we can fight global hunger”. The event will be presented by Carlo Ciavoni, journalist with La Repubblica and Director of Mondo Solidale. Speakers include General Director of Azione contro la Fame, Simone Garroni, Senator Emma Bonino, one of the first intellectuals and activists who helped establish Azione contro la fame in the ‘70s, and Lodovica Cima, publisher and author of children’s books.

“The male and female writers, and male and female illustrators supported by the entire publishing community have always given us a view of the world because they investigate it, they plunge into it and they read the phenomenon into it with sensitivity and attention,” says Simone Garroni, General Director of Azione contro la Fame. “Today, thanks to “Books Against Hunger”, in its first year, we want to bring attention on the most serious scourge of our planet, hunger, that in the past few years because of wars, climate change, inequality and now, COVID-19, has returned with force and struck the most vulnerable communities, and in particular, children. Hunger is a current event that must be fought in order to guarantee a future for humanity. Man is called to take on this challenge because often, man himself is the origin of the causes that determine it.”

There are 17 books in competition grouped in three categories: children’s books, fiction and non-fiction.

The jury will soon be giving an evaluation of the works and decide a winner in each category.

Youths leading a campaign to improve orphanages in Sudan: that’s why Fill a Heart (FaH)…