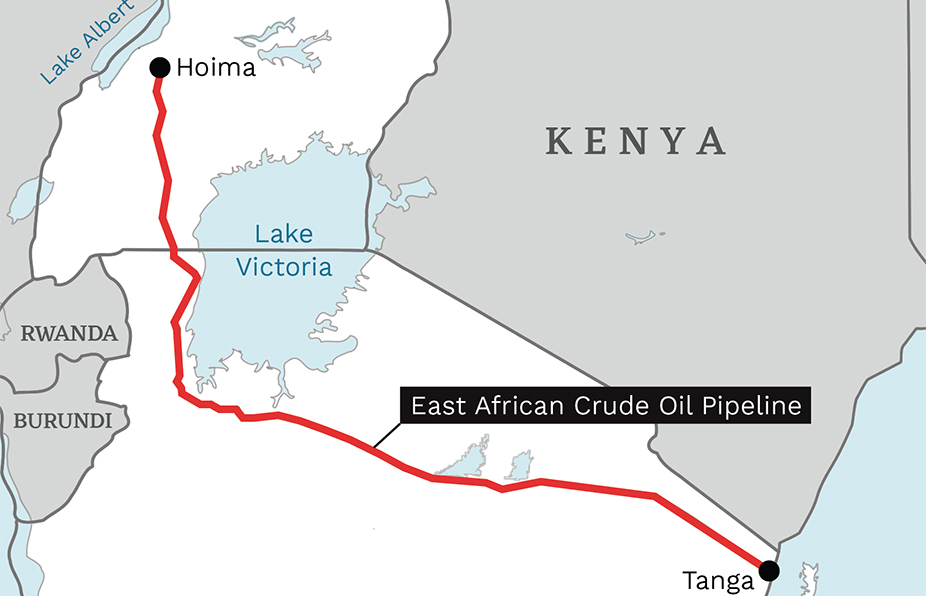 The mega pipeline between Uganda and Tanzania is underway. The East Africa Crude Oil Pipeline will be 1,400 kilometers long and will transport crude oil largely to China. There is a risk on the socio-environmental impact it will have. East Africa is concerned about the construction of the major pipeline project that will extend to the port of Tanga, on the border with Kenya on the Indian Ocean, from where it will take route mostly to Asia.

Oxfam sounded a warning immediately followed by environmentalists and human rights activists who denounced the risks for 12 thousand families forced to leave their land and turn their entire lives upside down.

Our own missionaries are also worried. We spoke by phone to Don Sandro De Angeli, fidei donum, from the Archdiocese of Urbino, who has been in Moroto in North Uganda for four years. He explained, “First of all, the pipeline will destroy the environment surrounding Lake Albert, one of the largest and most incredible natural resources in the country. Secondly, it won’t benefit the people living in the area. The financial return will be advantageous for the oil companies involved, including Total, certainly not for the local populations.”

“China is one of the biggest promoters of the pipeline; in fact it is involved in the China National Offshore Oil Corporation project and the crude oil extracted will mainly serve the Chinese market.”

The investment for this major project (when completed, it will be the longest pipeline in the world), that will transport oil from the subsoil, crossing rivers, forests and waterways, is equal to 3.5 billion dollars. It involves a cement pipe that not will only destroy farmland, it also threatens to further endanger the ecosystem as denounced by non-profit organizations and charities.

“’Displaced’ families were compensated and many people were relocated to brick houses in areas far away, it’s true, but families have protested because they don’t know where to keep their livestock and because they used to farm their land there,” said Don Sandro.

The oil will be extracted in Uganda and run through Tanzania: the Uganda National Oil Company and the Tanzania Petroleum Development Corporation (TPDC) are partners in the project along with three oil companies, including Total.

“The way the deal is set up, Uganda becomes the prey,” said Federico Santi, engineer and head of  Venite e Vedrete Onlus, a catholic NGO that creates development projects in Tanzania, when we reached him by phone. “It’s a further theft of resources because the oil will be exported abroad, mainly to Asia, so it won’t benefit the internal market.”

Another issue of concern is how the first phase of the project was developed: “Local groups claim they are not freely able to visit villages affected by oil projects, and consultations about oil development with civil society and affected communities are often perfunctory rather than participatory,” writes Oxfam

If the profit from the oil extracted were to actually reach local groups, it would be a resource against poverty.

A government spokesperson from Tanzania assured that the estimated proceeds will reach 3.24 billion dollars and that the pipeline will create 18,000 jobs in 25 years.

But doubts are endless: are these the real numbers for new jobs? And who will guarantee their salaries and safety?

“We saw what happened with the gold and precious stone mines in the area near Moroto: the locals never receive proceeds from the extracted wealth,” explains fidei donum Don Sandro. “And there’s no guarantee that local people will be hired to work on the pipeline. Usually, workers on infrastructures are Chinese. Furthermore, here in Uganda, the environment is precious and any change to it has immediate repercussions on our lives. We are already feeling them. The climate has changed a lot and the rainy season never ends; it began in March and hasn’t stopped. Essentially, it hasn’t stopped raining at all this year!”

Nuclear Energy, The First Floating Plant from Russia to Africa

A floating nuclear energy plant will make its way from the Arctic to Africa. The…