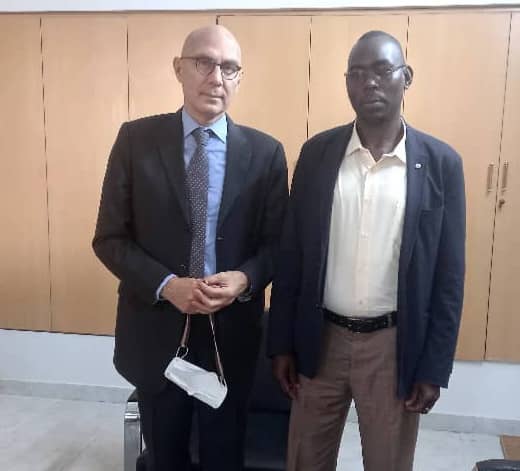 The General Coordination of Displaced  and Refugee Camps met the United Nations High Commissioner for Human Rights, Mr. Volker Turk on Monday, November 14, 2022, at the headquarters of the Office of the High Commissioner in Khartoum. The meeting discussed the situation of the victims of murder, injuries, rape, and arrest in Darfur since the Al-Burhan coup on October 25, 2021, until November 14, 2022, which exceeded more than (1188), and these numbers are just an example and a model of the series of crimes of murder, rape, robbery, looting, kidnapping, burning and displacement that citizens are exposed to. and displaced in Darfur on a daily basis.

The Coordination Committee explained to the High Commissioner the reason for these criminal acts and practices, which are part of the settlement schemes and demographic change that were initiated by the defunct regime and are still ongoing, with the aim of seizing the lands and homes of the displaced and refugees to achieve the goals of the crimes of genocide and ethnic cleansing in Darfur that began in 2003. It is still going on till now.

On the security side, the Coordination Committee made it clear that the security situation in Darfur still poses a permanent threat to the lives of all displaced  and civilians, because the Janjaweed militias find an opportunity from the state, which encouraged them to commit more serious violations.

The delegation also clarified their position on the partial agreements that were signed and did not address the issues of the displaced and refugees, and therefore do not represent them as they were not a party to them and did not authorize anyone to negotiate in their behalf, but rather falsified their will and represented them by proxy, especially the Juba Agreement.

The Coordination Committee summarized the demands of the displaced and refugees as follows:

1- Providing security and disarming armed military militias and the Janjaweed with their various names.

2- Handing over all the wanted criminals to the International Criminal Court, headed by the criminal / Omar Hassan Ahmed Al-Bashir, Ahmed Haroun, Abdel-Rahim Muhammad Hussein, Abdullah Banda, and the rest of the wanted people in order to provide justice to the victims.

3- The expulsion of new settlers from the lands and hawakir of the displaced and refugees in Darfur in order to ensure voluntary return.

4- Compensating the displaced and refugees individually and collectively, and restoring their rights that were robbed by the military forces and the Janjaweed militias.

5- Providing food and allowing entry to international humanitarian and human rights organizations, in order to provide protection, food and health, especially the organizations that were expelled in 2009 and 2013 by the former regime.

The Coordination Committee also recommended the High Commissioner to:

1- Sending humanitarian aid immediately, to all the displaced, especially those destined for women and children, which were stopped by the World Food Program due to the shortage and the reluctance of international partners and donors to support due to the October 25 coup.

2- Calling upon the Human Rights Council and United Nations mechanisms and regional organizations to intervene in a more effective role that goes beyond the stage of monitoring the human rights situation in Darfur, and to take decisions with a strong influence that protects the displaced and refugees instead of contenting themselves with denunciation and condemnation, in light of the continuing systematic violations against the displaced and civilians by the forces. government, armed militias, and the Janjaweed.

3- Pressure on Sudan to impose the rule of law, ensure that there is no impunity, and arrest criminals and bring them to justice.

4- Formation of a special committee of the United Nations Human Rights Council to investigate crimes of violence, rape and sexual abuse against women and minors in Darfur, and to provide them with protection.

The delegation reminded that the humanitarian situation in Darfur, especially in the camps for the displaced, is witnessing a terrible deterioration , and an acute shortage of basic needs, such as food, pure drinking water, and life-saving medicines, with the spread of malnutrition, epidemics, and diseases such as malaria and fevers among children, pregnant and breastfeeding women, with no availability of medicines and the lack of health centers in the camps and war-affected areas, which necessitates the urgent intervention of humanitarian and human rights organizations, especially the United Nations High Commissioner for Human Rights.