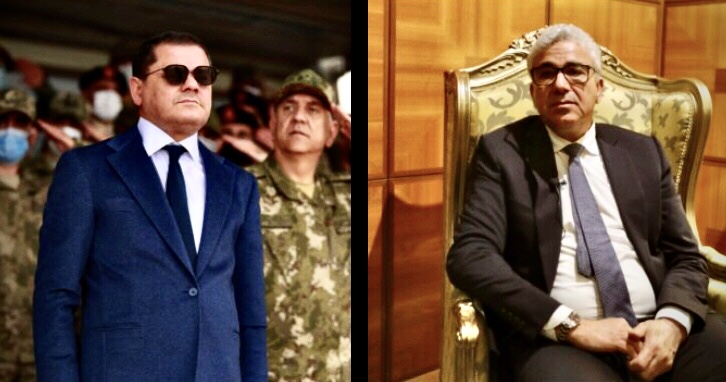 Libya cannot find peace that after having canceled the electoral appointment of 24 December due to extreme organizational difficulties, tomorrow could have two Prime Ministers, one in Tripolitania and other one in Cyrenaica. On Monday, the Tobruch House of Representatives called for the election of the new Prime Minister tomorrow, declaring Abdulhamid Dabaiba, all head of the Libyan transitional government, forfeited. By the mouth of his spokesman Aguila Saleh, a powerful politician from the east of the country supported by Egypt and Russia, Dabaida is considered forfeited by the House of Representatives having ended his mandate with the missed election in last December. The head of the GNA (Gouvernment of National Accord) supported by the United Nations and militarily backed by Turkey has declared that he does not intend to resign for the good of the libyan people and that he will lead the country to the elections. From his Dabaida he would have the Superior Council of State based in Tripoli and a good number of militias always around the libyan capital city. To counter the power of the representatives of Cyrenaica, Dabaida stressed the need to “achieve a balance in the decision-making process by the High Council of State in Tripoli and the House of Representatives in Tobruch”, putting his support behind “any roadmap. leading to elections and putting an end to all phases of transition “. But his time seems to be over as his office really had to be provisional in view of the long-awaited elections. Meanwhile, under the capable hand of the President of the Libyan Parliament Aguila Saleh, the large roster of candidates has been restricted to only two contenders for new Prime Minister. Khaled Al-Bibas, a semi-unknown businessman in the field of communications and former Minister of the Interior Fathi Bashaga. Together with the candidates, the Tobruch parliament also presented a political road-map that should lead the country to the polls within 14 months and that the incumbent Prime Minister will not be able to run in the presidential elections. The big favorite seems to be Fathi Bashaga, a former aircraft pilot and very powerful political personality from Misurata who also boasts powerful connections in the east of Libya. Fathi Bashaga has international friendships, especially with Ankara who see him as a good candidate. The russians, much closer to Saleh and with fluctuating relations with General Haftar, are ready to deal with both Bashaga and Ankara. Now, however, the votes will have to be counted and nothing is certain yet. Dabaida still enjoys the support of the international community and will fight, probably not metaphorically, to hold his post as Prime Minister. A strong negotiation is needed to convince the former businessman close to Saif Gheddafi to step aside and above all the election should have important numbers in parliament first and then confirmed in the senate, which in Libya is called the High Council and is based in Tripoli. Meanwhile, Italy is also following with high attention what is happening beyond the Mediterranean and on Monday the Foreign Minister Luigi Di Maio met Stephanie Williams, special advisor to the UN Secretary General for Libya, to support the Libyan electoral process as soon as possible.