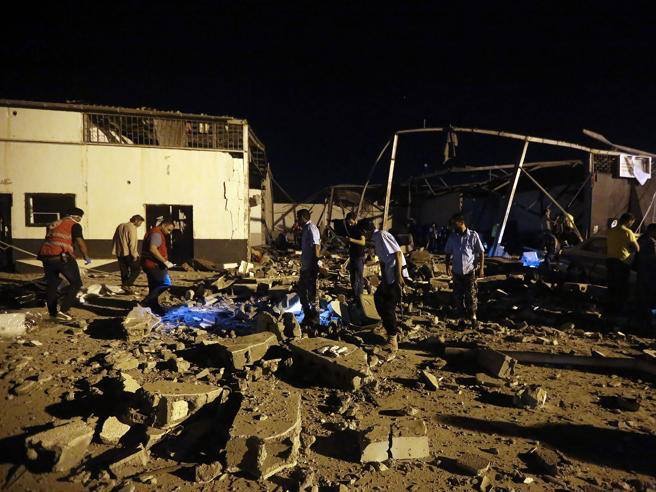 At the beginning of the crisis and with the incremental and violent offensive led by military strongman Khalifa Haftar to take control of the country, Libya was a lead story on all national news broadcasts and frontpage headlines in newspapers. Then, as the weeks passed, the flux of information began to wane despite the 600 deaths, 4 thousand wounded and 110 thousand displaced persons. Khalifa Haftar’s troops have reached and are fighting 12 kilometers from Tripoli, location of government headquarters led by Prime Minister Fayez al-Sarraj as part of a United Nations agreement.

Even today, following the news of the airstrike on the Tajoura detention center, it is difficult to find the story on primetime. Yet ANSA, the leading Italian news agency, frequently reported the story on what the United Nations have defined a “war crime” many times.

Victims of the attack count in the hundreds at the moment according to Ismail Mohammed, a spokesperson for the Sudanese Refugee Committee in Italy, who is in direct contact with Sudanese survivors that represent the largest nationality in the detention center in Tajoura. Many of the wounded are in serious condition and about eighty migrants are missing, mostly Sudanese. Like Ismail, some of them are from his hometown of Darfur, but there are also Somalians, Eritreans and Ethiopians.

UN Representative Ghassan Salamè immediately invited the international community to condemn the strike and to impose sanctions on those that ordered and executed the attack.

Many women and children lost their lives in the attack. Another tragedy demonstrating the atrocious impact of the war on defenseless civilians.

That’s why, in addition to the invitation to condemn the indiscriminate bombings on non-military areas and an appeal to stop the hostilities that continue to put human lives at risk and destroy important infrastructures, appropriate safety measures for the local population must be guaranteed and the refugees must be removed to safe places under the supervision of the United Nations.

Libya was not a safe place before the civil war and after April 4 it is a country at war.

In strictly geopolitical terms, the Libyan National Conference should be encouraged rather than just support al-Sarraj’s proposal on June 16 to launch an initiative to lay a constitutional foundation for the future of Libya under the auspice of the UN. It’s unfortunate that the Libyan Premier hopes to “unite the parties that support a peaceful and democratic resolution” and exclude Haftar.

A serious attempt to negotiate a ceasefire and create a basis aimed at finding a peaceful solution in Libya cannot disregard the presence of the strongman in Cyrenaica and the regional players who have been around longer than him. The hope is that his strongest supporters, Egypt and the Arab Emirates, under international pressure and after Haftar’s weakened forces at the loss at Gharayan, will make different choices; political pressure over supporting Haftar’s army forces. But it has to happen quickly. Time is running out.

The conflict taking place just outside Tripoli is putting World Health Organization and NGO operations to aid migrants and refugees held in detention centers to the test.

Envoys continue to work to make sure that first aid structures have the necessary resources and supplies to guarantee assistance and support families escaping their countries. But the situation in the area is completely out of control.

In view of the worsening of the crisis, diplomats are scrambling to return the conflict to a political level.

The United Nations spoke about a commitment “to save what can be saved”, as stated openly by Ghassan Salamé, UN Special Representative in Libya of Secretary General Antonio Guterres’. After negotiations were suspended, pending their “adaption” to the actual situation, the UN’s shortfalls looked embarrassing.

Without the unity of the main players on the field and active support from the international community, operation “political solution” is only a “mission impossible”.