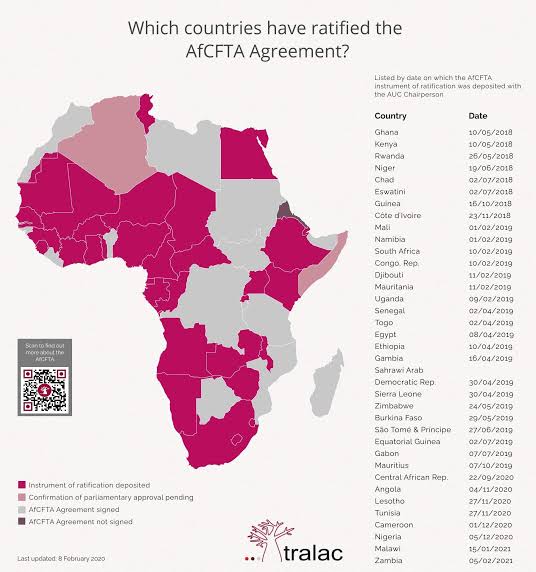 February 2021 marked the first month of trading within the African Continental Free Trade Area. Currently, the free trade agreement operates across thirty-six countries, with another seventeen prospective members with pending ratification or deposition. The agreement represents a milestone for economic integration and multilateralism in Africa. To date negotiations have largely centered on the reduction of tariffs and the elimination of non-tariff barriers. However, the agreement is intended to be augmented by future discussions. Specifically, in the coming year, negotiations are set to conclude on the matters of intellectual property, investment and competition. The ACFTA has quickly proven the most ambitious free trade project on the African continent in recent history. That said, it is not an unprecedented occurrence. Africa features many regional trade agreements and economic arrangements. For instance, the Economic Community of West African States (ECOWAS) and Southern African Customs Union (SACU) have operated for decades. The salient feature of the ACFTA is that it intends to cover the entire continent. This will enable the agreement to cover a broad range of topics, although it does create challenges with consensus and implementation across its large membership. Although the agreement is largely confined to trade concerns, it is likely to broaden in the future. As stated, discussions are already underway for investment and intellectual property. Some semblance of a common capital structure is likely to emerge to accompany the agreement. This could take the form of an investment or development bank, similar to an institution such as the Asian Infrastructure Investment Bank. It could manifest itself through extant discussion on investment, which would enable African countries to more easily access private capital from within the continent. Another natural extension of the agreement would involve discussions about the movement of persons and workers. That said, these scenarios are speculative, although there

appears to be ample political capital for these developments. One scenario that is less speculative is the matter of currency. Common currencies have been a feature of African economies for quite some time. The Central African Franc and West African Franc (and formerly the South African Rand) are examples of this trend. However, the ability of African countries to pursue an independent currency policy has been limited. Many countries are rentier states, meaning that the currency is vulnerable to commodity prices, harming long term economic stability. Some African countries employ currency pegs, which avoid these kinds of fluctuations, but in the process cedes fiscal sovereignty. The implication is the ACFTA could facilitate the growth of existing common currencies, or perhaps even debut a currency of its own. A common currency with many users could provide a stable base against export price volatility, given that there is great diversity among African economies. However, in speculations, it is important to recognize that the future of the ACFTA and the direct it takes will largely depend on the importance it is afforded by its members. For these kinds of grand political and economic projects to proceed, it will require large investments in political and economic capital. The ACFTA will also have to avoid becoming a political battleground, as happened with the Arab Maghreb Union in North Africa, where disagreements between Algeria and Tunisia over the Western Sahara forestalled any meaningful cooperation among its membership. Overall, the launch of the ACFTA has demonstrated a renewed commitment to multilateralism across the African continent and offers some very exciting possibilities in many fields. However, on the international scale, institutions like the ACFTA are what their members make of them. With sufficient commitment, the ACFTA presents an unprecedented opportunity for Africa’s economic and political future.

Covid-19, the impacts of pandemic emergency on the African Economy

When Colonial Italy Abolished Slavery in the Horn of Africa

Until 1935, slavery was still in force in Ethiopia. To give an idea of the…

Ethiopia, Over 180,000 People in Tigray are Dying Without Medical Assistance

Tigray is starting to receive visibility within the international community. News and updates in this…