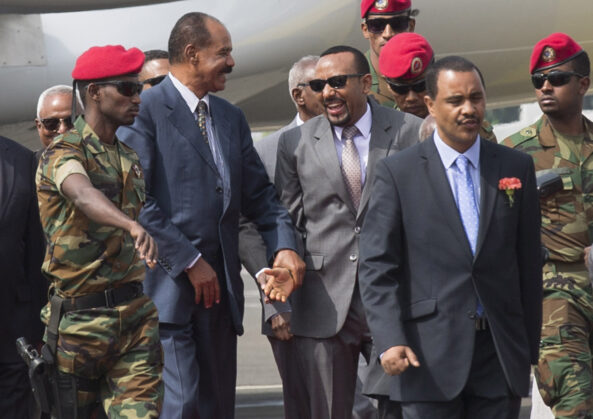 The current situation in the Tigray region is quite different from the one Ethiopian Prime Minister Abiy Ahmed portrayed in press releases.

What appeared to be an important decision has been described quite differently by the evidence, rumoured reports and testimonies arriving from the region with great difficulty by going through alternative channels.

Prime Minister Abiy has been pressured by international players to withdraw Eritrean troops who have occupied the Tigray.

On 26 March 2021, he held his first official visit to Asmara with Eritrean President Isaias Afwerki and shared his report on the discussions which stated the joint agreement to withdraw Eritrean forces from Tigray. But is it really so? Or will it be assimilated by the ENDF?

On 2 April 2021, several tweets showed photos of trucks in Adigrat, trucks carrying a lot of equipment (described as looted from the homes and offices of Tigrean civilians) and men wearing uniforms with the colours of the Eritrean army.

I received a text message from a trusted contact in loco confirming the situation.

To date, we only have the Prime Minister’s statement regarding the withdrawal of Eritrean troops from Tigray. There have been no official press releases from Eritrea on this matter and no specific time line has been communicated.

On 03 March 2021 in a statement made by Prime Minister Abiy four months after a statement in which he said that the war was over and that the TPLF had won, he backtracked and indicated that intense fighting was still underway in Tigray, “The junta which we had eliminated within three weeks has now turned itself into a guerrilla force, mingled with farmers and started moving from place to place,” he said referrng to the TPLF.

“Now, we are not able to eliminate it within three months,” he added.

Ethiopia’s military is fighting “on eight fronts”, the Tigray region is only one of them.

In the meantime, there are rumored reports of new massacres of hundreds of civilians by Eritrean troops in Selekleka, about 30 km east of Shire, including the BBC report we cited here in Focus on Africa.

Again, only time will give us an answer to this new, horrific and inhuman massacre. For now we can only wait that those who have the power to act will work to ensure that justice is given to all the people who are suffering and in need of food, water, healthcare and human support.