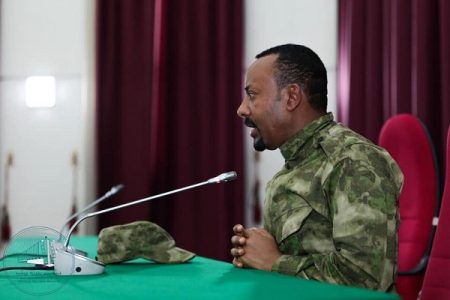 Over a year after the election of Abiy Ahmed, Ethiopia is faced with a serious political crisis. Ambachew Mekonnen, President of Amhara Region – a region in central-northern Ethiopia with a population of 23 million – was assassinated along with his personal advisor in Bahir Dar, the capital city of the region.

This was not an isolated episode. In Addis Ababa, the Ethiopian capital, Chief of General Staff of the Ethiopian National Defense Force, Seare Mekonnen, and another official died from fatal wounds from gunfire that broke out during an attempted coup d’état.

According to Leah Harding reporting for Al Jazeera, “(…) the two generals that were killed in Addis Ababa are part of the Tigre ethnic group, and the person who we believe is responsible for the coup plot is part of the Amhara group.”

It seems that the attempted coup and the coordinated attack against the President of the Amahara Region were meant to create chaos among the military. It failed, and reveals how Abiy Ahmed’s efforts to set aside his predecessors iron-fist policies and push for reforms, have unleashed a wave of unrest that began in May and have brought out tension between ethnic groups because of land possession and natural resources in general.

Then again, it was clear to Abiy Ahmend from the beginning of his term that transitioning out of a long regime and later the interim period ruled by the Tigre would not have been easy. This is especially true of the various ethnic groups in the country. He himself is Oromo and Chairman of the Oromo Democratic Party (ODP) that spearheaded the two years of mass demonstrations that led to the fall of former premier, Hailemariam Desalegn.

In an effort to bring democracy to Ethiopia, it seems that showing more concern for civil rights, recognizing the importance of freedom of the press, and being acknowledged as a leader by the big international players (the European Union, the United States, China) aren’t strong enough components for debate. The tense situation and vendettas continue in a country with a population of over 100 million, of which 70% are under 25 years of age, where unemployment is rampant, and which goes through cycles of famine making it an extremely poor country. However, Ethiopia is a country that has a crucial role, geopolitically, in the entire Horn of Africa.