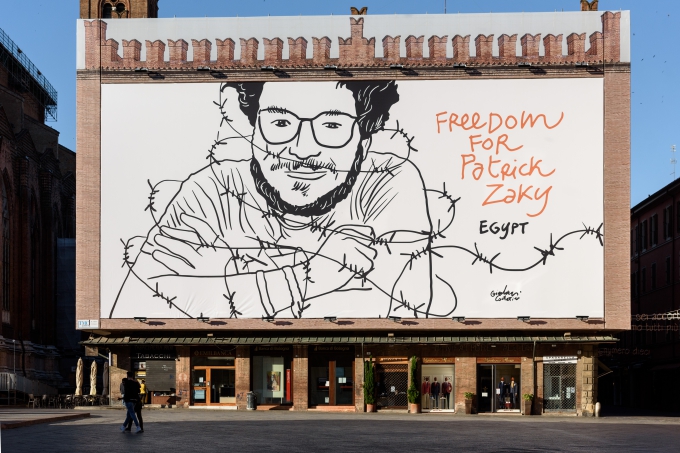 Patrick Zaki’s pre-trial detention has been extended for another 45 days. His lawyer, Hoda Nasrallah, told reporters the outcome of the hearing that was announced today by the Egyptian Prosecutor’s Office.

Meanwhile, an event is being organized in Bologna for his upcoming birthday.

A public exhibition along the cornices of the Portico di San Luca will feature the stories of 50 political prisoners from 13 different countries. The inauguration is set for 16 June, Zaki’s birthday. From Sanaa Seif, the Egyptian director sentenced to a year and a half in prison for criticizing the government to Idil Eser, human rights defender in Turkey accused of terrorism; from Aleksei Navalny, detained in Russia for denouncing corruption, to Ahmadreza Djalali, sentenced to death in Iran under false charges of espionage.

Fifty political prisoners, including Patrick Zaki, will be honored by the 6000Sardine movement, Amnesty International Italia, the University and City of Bologna under the Portico that leads to the Sanctuary of the Madonna di San Luca, a candidate to the UNESCO world heritage list. Banners running two-meters by one with drawings by Gianluca Costantini will be hung along the 1,500-meter long Portico that goes from Porta Saragozza to the Arco del Meloncello, one of the most iconographic features of the characteristic Portico of Bologna. The idea is to unite two heritages, artistic beauty and the inviable rights to freedom. Two patrimonies with equal value that will meet in Bologna to send a universal message of freedom, beauty and justice.

The date of the inauguration, 16 June, isn’t a coincidence. It is Patrick’s 30th birthday who, until his arrest in Cairo in February 2020, was a student at the University of Bologna.

The event will take place in partnership with Station to Station, an association that collected over 260,000 signatures on change.org asking the Italian government to give the Egyptian activist Italian citizenship, and Coop Alleanza 3.0 that supports and shares the values of the event.