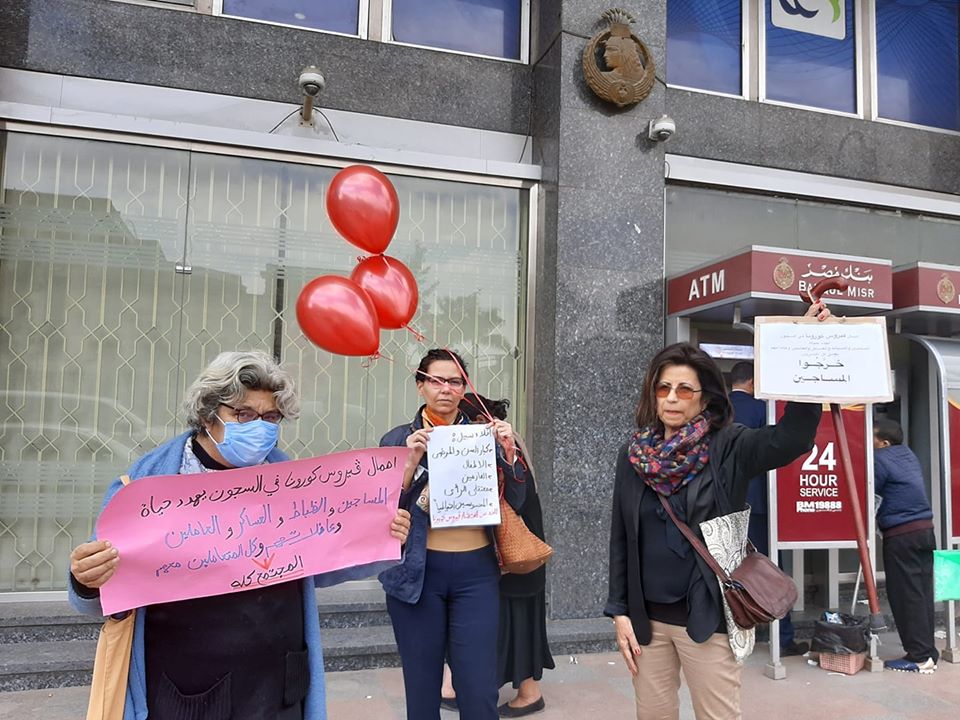 Ahdaf Soueif, her sister Laila Soueif and her daughter Mona Seif, and Rabab al-Mahdi were arrested yesterday in Cairo. The four women were protesting outside the Egyptian Cabinet asking the government to take serious steps against the spread of the COVID-19 in the overcrowded Egyptian prisons as well as for the release of Alaa Abdel-Fattah.

Blogger and activist Alaa Abdel-Fattah, Laila’s son and Mona’s brother, has already spent six years in prison for violating the anti-protest law and has been detained again since September for protesting against President Abdel Fattah al-Sissi.

On Tuesday 17 March, Laila Soueif wrote a long letter to Egypt’s attorney general saying, “The only way to prevent detention centres becoming hubs for spreading the pandemic and endangering the entire population of the country is to release as many prisoners as possible.”

Human rights organizations have been denouncing overcrowding and poor hygienic conditions in Egyptian prisons for some time. Issues Mona has spoken out about in recent weeks in regards to the significant likelihood of the COVID-19 spreading among prisoners.

She live-streamed the protest on Facebook that stops shortly after the police arrive and an initial exchange of words begins. Khaled Ali said that the four women, whose cell phones were taken and turned off, were asked to “discuss the matter” at a police station. They were then taken to the Qasr el-Nil police station.

Sanaa Seif, Mona’s younger sister, was denied access to the police station from which the four women were later transferred and taken to another facility. The women face charges of illegal assembly, unlawful protests and obstructing traffic.

News of the arrest spread quickly among the media outlets mainly due to the arrest of Ahdaf Soueif, internationally renown novelist and a contributing writer for The Guardian as well as the founder and president of PalFest, the Palestine Festival of Literature. PEN International and some of its representatives called for the immediate release of Ahdaf Soueif, Laila, Mona and Rabab.

Salil Tripathi, chair of PEN International’s Writers in Prison Committee said, “Egypt’s government should rise to the role it is expected to play as a government and immediately release Ahdaf Soueif and others, who were peacefully calling for the release of prisoners in jail, to prevent their exposure to #coronavirus. Jailing writers who speak truth to power is an old authoritarian trick; Egypt must walk back from that path,”

The spread of the COVID-19 pandemic – for which the Egyptian government is adopting newer and stricter measures – is the reason why freedom of information in Egypt is currently at risk.

Not surprisingly, Monitor Pulse headlined, “Egypt’s censors shift into high gear over coronavirus coverage” after the government threatened The Guardian with revoking press credentials of reporters and correspondents in the country, and accused The New York Times’ bureau chief, Declan Walsh, of violating professional ethics. This is the result of a Canadian study (published in The Guardian on 15 March) that estimated there are actually 19,300 cases of the COVID-19 in Egypt compared to the 126 confirmed cases reported by the Minister of Health.

This number rose yesterday to an official estimate of 210, putting al-Sisi’s country in first place in Africa for the total number of confirmed COVID-19 cases, taking the title from South Africa that currently has 150.

According to Paola Guazzo, a leading figure in the lesbian and intellectual world and a writer with Il Manifesto, “While in the West there are discussions on biopower and vulnerability, four women in Egypt, where those in opposition to the government are arrested and tortured, speak out and are arrested for supporting male and female prisoners left to fend for themselves against the Coronavirus. I am remined of a friend and fellow activist, Pinar Selek, who was detained in Turkish prisons because of her opinion, and I imagine that same energy and willingness to fight despite everything in my Egyptian comrades. Vulnerability exists but we can make it disappear by fighting together. The sense of a future can never be eradicated completely.”